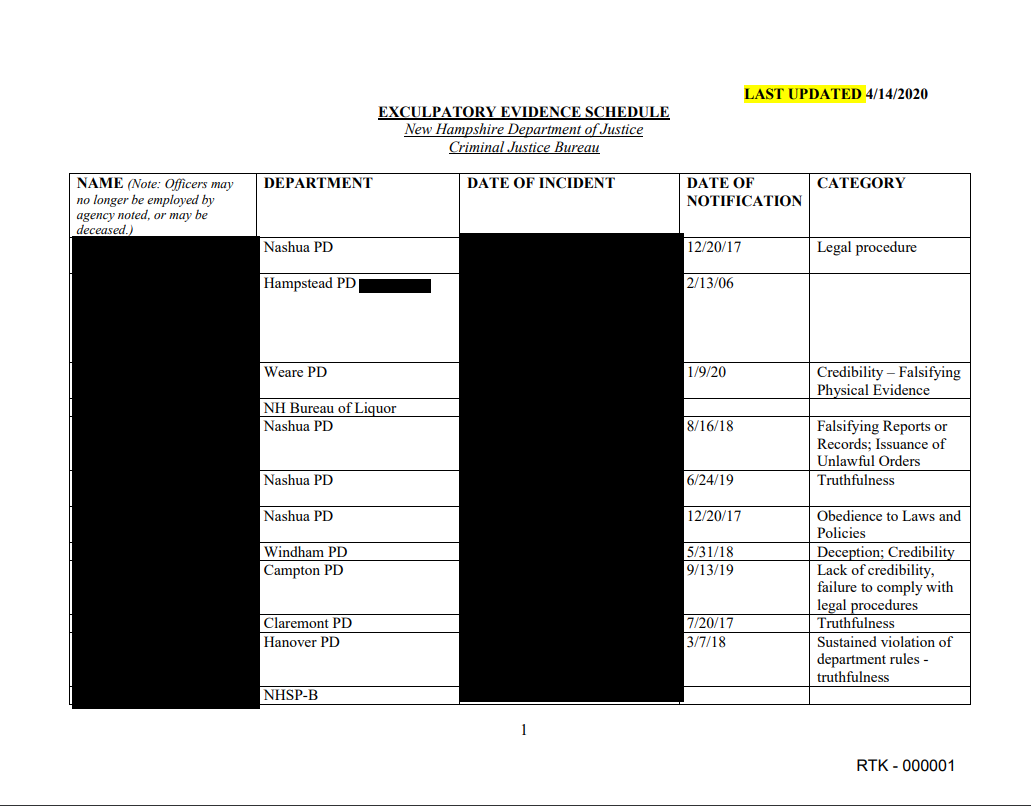 The state Senate voted unanimously Thursday in favor of proposed legislation that would make public police disciplinary hearings before the Police Standards and Training Council and make public the confidential Laurie List of dishonest police.

State Sen. Sharon Carson, R-Londonderry, introduced House Bill 471 and its recent amendment, congratulating everyone who worked on what she called a “compromise” to the controversial Laurie List issue.

There was no mention that the amendment stems from confidential negotiations between ACLU-NH, Solicitor General Daniel Will and five of the news outlets involved in a public records lawsuit against the state seeking to make public the names of the 280 plus officers on the list. Only one news outlet, lead petitioner the New Hampshire Center for Public Interest Journalism, opposed the compromise.

“This is an important piece of legislation and provides a delicate balance between the rights of officers and the transparency that is vital for our democracy,” Carson told her colleagues in the live-streamed session. The bill and amendment passed 24 to 0. It now goes back to the House.

The Laurie List, now called the Exculpatory Evidence Schedule or EES, is kept to flag prosecutors when the name of an officer must be disclosed to criminal defendants as required by the state and federal constitutions if discipline against the officer could involve evidence favorable to the defendant. Confidential personnel file information about an officer with a propensity for dishonesty or use of excessive force may be considered exculpatory evidence and could potentially be used to attack a testifying officer’s credibility in court.

If it is discovered later on – even decades later – that a defendant wasn’t provided all favorable evidence, or exculpatory evidence, the conviction may be tossed and in egregious cases, charges could be dropped and prosecutors could face discipline.

Carson said House Bill 471 establishes a procedure under which the names on the current EES list will become public and will allow an officer to challenge the discipline that placed him or her on the list. The compromise on the Laurie List has been many years coming, she said, adding the list has been voluntarily maintained by the attorney general for many years.

“But throughout that time many questions about its fairness and transparency have arisen,” Carson said. “This bill will resolve those issues by establishing a procedure by which the names on the current EES list will become public… and will allow an officer to challenge the discipline that placed them on the list providing them due process before their names are released publicly.”

Carson credited the hard work by media outlets, law enforcement and other stakeholders for the compromise and “is consistent with the hard work done by the LEACT Commission.”

The compromise was detailed in a motion filed two weeks ago in the public records lawsuit New Hampshire Center for Public Interest Journalism v. Department of Justice seeking release of the list.

ACLU-NH and five newspaper publishers – The Telegraph of Nashua, Union Leader Corporation, Newspapers of New England, Inc., Seacoast Newspapers, Inc., and Keene Publishing Corporation, all agreed to the motion to delay any further proceedings in the lawsuit until July 1 to wait and see if House Bill 471 passes.

ACLU-NH and six media outlets won their case in front of Judge Charles Temple in Hillsborough County Superior Court South. He ruled the Laurie List is a public document. But former Attorney General Gordon MacDonald appealed to the state Supreme Court, which agreed that the list is not exempt from the state’s right to know law, but sent it back to Judge Temple to decide the privacy rights of police on the list.

Judge Temple hasn’t yet ruled on that motion to delay until July 1.

ACLU-NH’s Gilles Bissonnette says if House Bill 471 passes, it will make the public records lawsuit unnecessary. Bissonnette withdrew from representing the New Hampshire Center for Public Interest Journalism last fall because the Center wouldn’t agree to further delaying the case while continuing negotiations unless the state would guarantee that all of the officer names would remain on the list once it is finally released.

Andru Volinsky, who now represents the New Hampshire Center for Public Interest Journalism, filed a motion objecting to further delays in the case.

“While l appreciate the effort of the other parties, I on behalf of my client the New Hampshire Center for Public Interest Journalism, will oppose the request for a stay,” Volinsky said in the objection.

“Resolving this important litigation through any piece of legislation is highly uncertain. Moreover, the proposed legislation does not sufficiently respect the public’s interest in the Laurie List while showing too great a deference to those who may have their conduct revealed by publication of the list,” Volinsky said.

The Laurie Lists were well-kept secrets until 2012 when the New Hampshire Union Leader and then other newspapers began reporting on them. At the time, there were separate lists kept by the 10 county attorneys and there were about 50 redacted names on the lists.

The disclosure requirement stems from the 1963 U.S. Supreme Court case Brady v. Maryland and others including the 1995 New Hampshire Supreme Court case state v. Laurie, which was overturned because the defendant Carl Laurie wasn’t notified that the lead police officer in his homicide case had serious, known credibility issues.