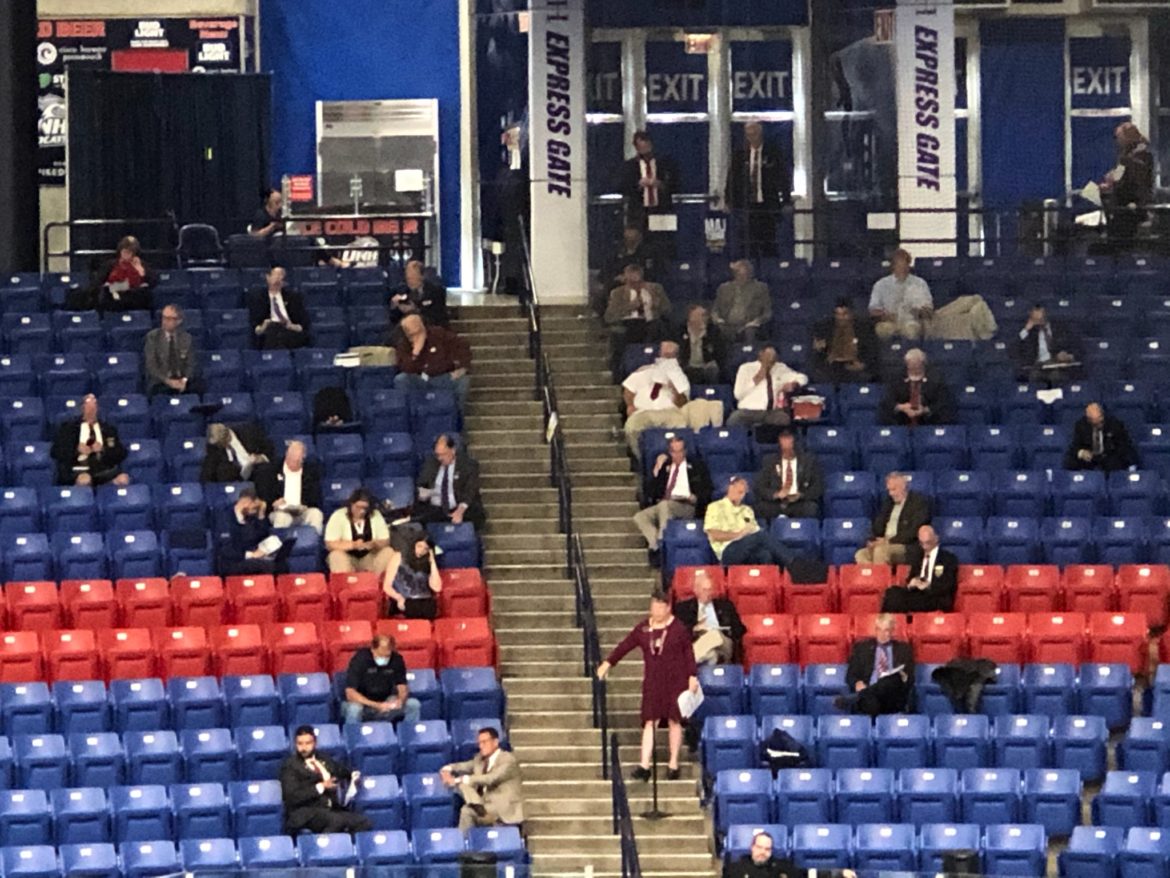 DURHAM – The strange end of the 2020 legislative session came Tuesday with most members wearing face coverings and shields on the floor of an ice arena at the University of New Hampshire with some following strict rules for social distancing.

And then there were the “Freedom” seats in another area far from their peers where members of the House sat who refused to wear masks or to socially distance for reasons of liberty.

About 35 Republicans sat in an area with signs reading “Welcome to the Freedom Seats.”

Rep. Tim Lang, R-Sanbornton, wearing a Hawaiian shirt with a face mask in his pocket, said he decided to sit among the “Freedom” seats to express his support for “individual choice.”

He said he was most pleased with the passage of a bill he called the “Huey Leung bill” that prohibits anyone with authority, including all school staff, from having a sexual relationship with a teen and was most disappointed that a bill dealing with “net metering,” failed.

In the House calendar for the last day of the second year of the 166th General Court, the people who chose to sit in those seats were labeled “non-compliant” of medically recommended protocols.

Among the bleacher seats were about 10 members of the House who for medical reasons could not wear masks.

There was more of a mood of resignation in the arena like it was already over Tuesday, and a look to fall re-elections for many as all House seats are up for grabs.

Members were asked to stay in their seats, with the exception of when speaking. They had lunch brought to their folding chairs. They came in at staggered times based on the county they serve. Teams of UNH medical and police staff screened members by taking their temperature and asking if they had traveled by public transportation in the past 14 days, among other questions.

Firearms were not allowed by UNH, just as is the case in Representatives Hall, but a lockbox for weapons was provided. The doors were locked at 10 a.m. and no one was allowed in after that time.

On each designated seat was a UNH tote bag containing hand sanitizers, water, and an extra face mask.

This was the second and likely the final time House members would meet outside their normal chambers at the State House and only the second time since the Civil War.

This was the last day. The exception could come in the fall when the House may reconvene to override any vetoes by Gov. Chris Sununu.

Sununu recently said he expects to get the veto pen out and assured that a number of the concurred bills are going to die on his desk.