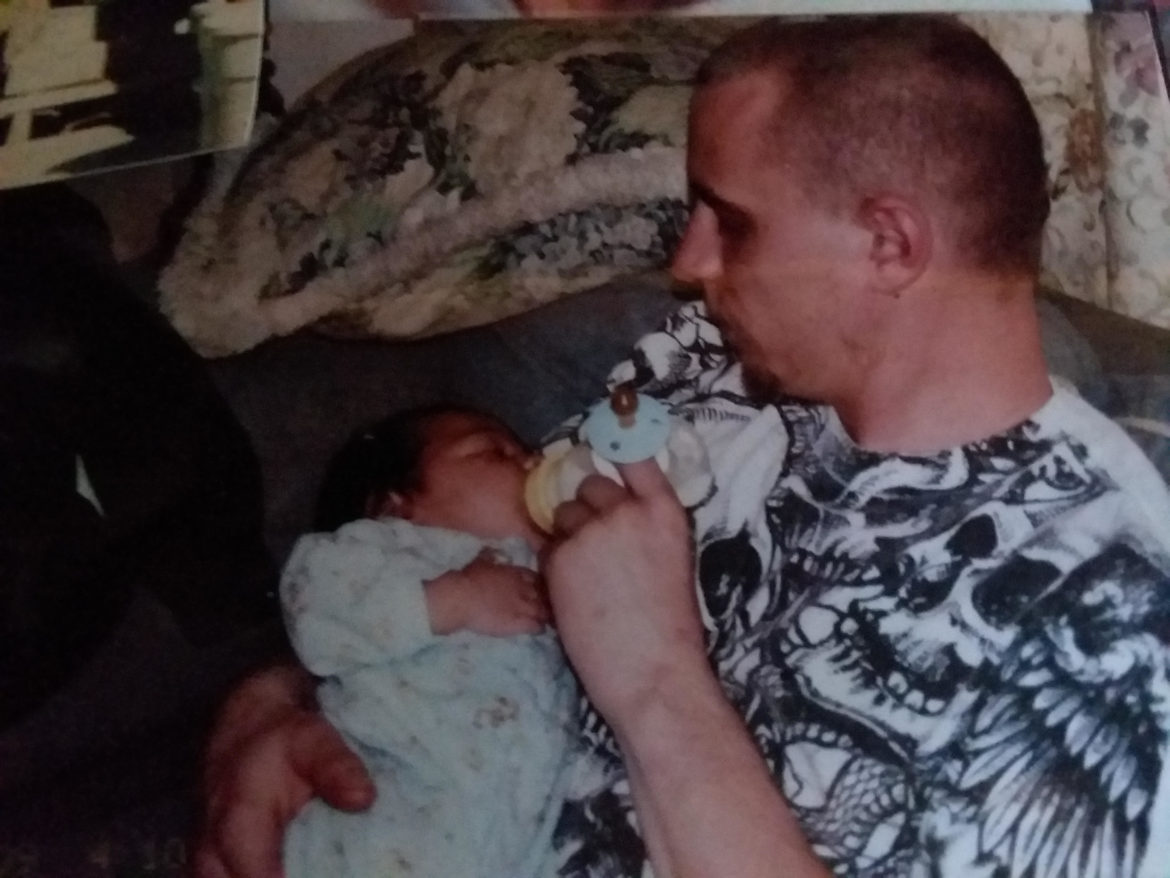 Anthony Heath is pictured feeding his nephew before he was civilly committed two years ago.

CONCORD – A Milan mother who is fighting to keep guardianship of her son who is being held in the state prison’s Secure Psychiatric Unit said the state objects to allowing InDepthNH.org cover the upcoming hearing as she and her son have both requested.

Nancy Heath said the state is trying to make her look like she is exploiting her son, Anthony Heath, 32. Heath said instead, she is trying to shine light on what she views as horrific treatment of individuals in the Secure Psychiatric Unit.

Attorney Lynne Mitchell filed a motion objecting to Heath’s request arguing that the hearing is confidential by law and Heath is trying to further her own agenda.

“I’m not trying to exploit my son. I’m trying to expose what’s going on at the Secure Psychiatric Unit,” Heath said, adding her son agrees with her. The June 7 hearing on whether to remove Heath as guardian has been continued to July 12.

Mitchell objected to Heath’s motion that also asks to allow her friend, Wanda Duryea, co-founder of Advocates for Ethical Mental Health Treatment, into the hearing and objected, too, to calling a witness who was formerly held in the prison psych unit to testify about his treatment there.

“The state is promoting Anthony’s right of confidentiality to cover up their political agenda, and to shield themselves for claims of their violation of the Emergency Medical Treatment and Labor Act,” Heath said in a motion responding to the state’s objection that she drafted on Thursday.

“The state has not (stated) any grounds to show any detrimental effect to Anthony exercising his First Amendment rights.”

Heath has also complained that Anthony was tasered and tied down in 2016 for a non-emergency blood draw at her request.

Mitchell wrote: “Opening the hearing for three visitors…only promotes the visitors’ public agenda to curtail all New Hampshire Hospital transfers to the Secure Psychiatric Unit which is not relevant to the motion to remove.”

Mitchell represents the New Hampshire Hospital and the Department of Corrections, according to the motion.

Duryea said she wants to attend the guardianship hearing to support Nancy and Anthony Heath.

“I like to be there for moral support. It’s nice to see a friendly face in a sea of unfriendly faces,” Duryea said, adding she met Heath after Anthony contacted her seeking help.

Duryea co-founded Advocates for Ethical Mental Health Treatment with Beatrice Coulter. They have been outspoken against commingling people who haven’t been convicted of a crime with convicted criminals with mental illness at the prison psych unit.

The issue has generated a great deal of controversy with several lawmakers, including Rep. Renny Cushing, D-Hampton, and Sen. Kevin Avard, D-Nashua, promising to push for change in the next legislative session.

The state wants to replace Heath as Anthony’s guardian with someone from the Office of Public Guardian claiming she refuses to allow him to be medicated, which she denies. The state also claims Anthony threatens his mother during phone calls.

“They are arguing that my son is hostile with me and bullies me,” Heath said, adding that is how the two often communicate. She said he first showed signs of mental illness in his late teens and she is the best person to advocate for him.

Anthony was involuntarily committed about two years ago for up to five years as being not competent to stand trial for a first-degree assault and a second-degree assault charge in separate incidents in 2015. The charges have been dropped, but Heath said they could be reinstated in the future.

Heath wanted her son tested for any possible health issues before the state medicated him soon after he arrived at the prison psych unit. She still feels guilty about what she said then transpired.

Her son refused, she said. “They then suited up and tasered him, put him in four-point restraints and drew blood. I picture my son quivering on the floor and them picking up his limp body, tying him down and drawing the blood.”

Talking about it even now makes her cry during a telephone interview.

“This needs to stop,” Heath said. “It’s not just my son going through it.”