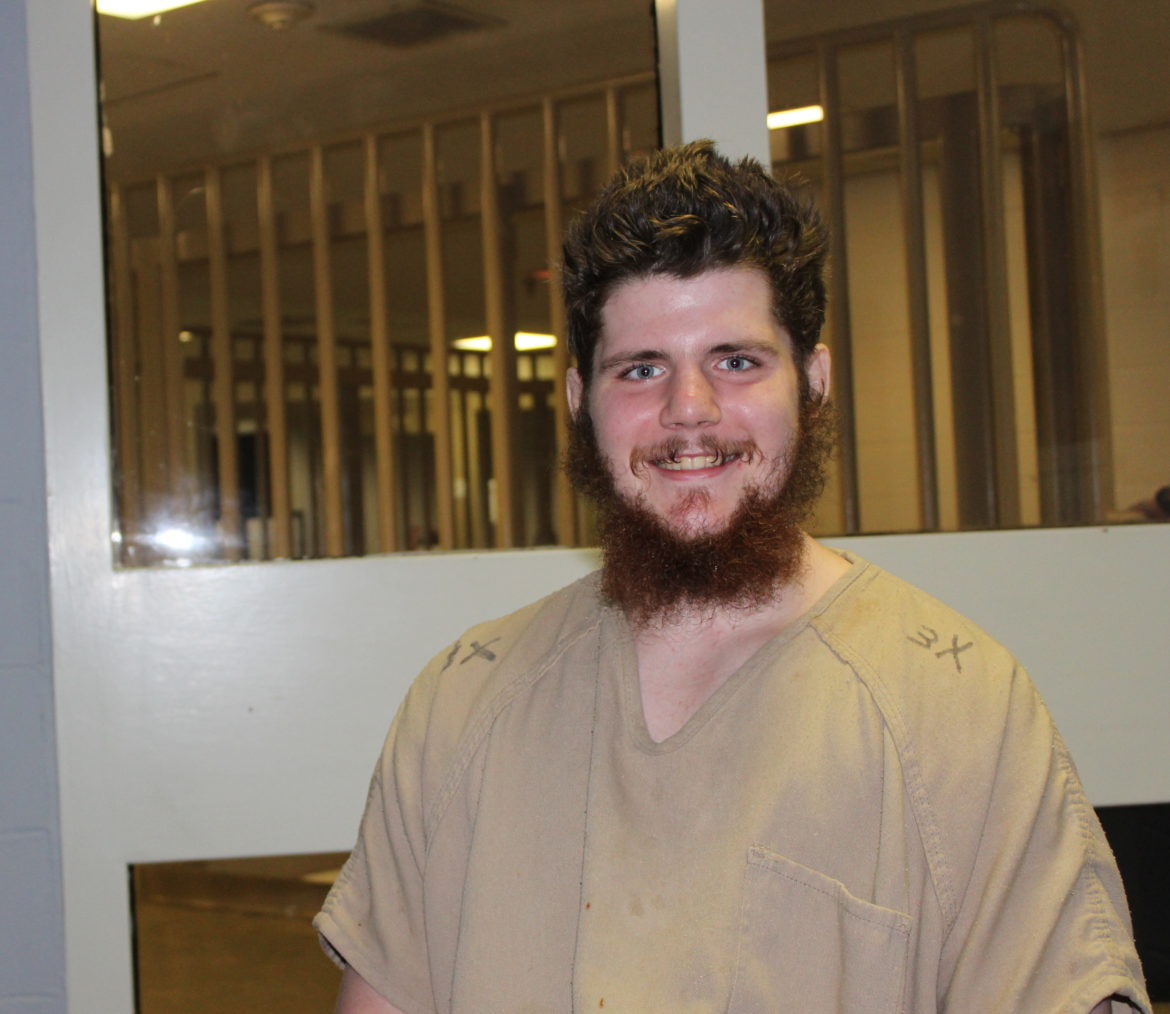 CONCORD – Andrew Butler laughs out loud at the mention of all of the support he is getting from family and friends back home in Hollis. His eyes sparkle as he thinks about his father, Douglas Butler, and best school friends and their families, and he laughs some more.

It’s easy to see why the 21-year-old former star athlete at Hollis Brookline High School has so much support, friends raising money for legal fees and a petition to free him from prison. Butler is being held at the Secure Psychiatric Unit at the men’s prison in Concord even though he isn’t charged with or been convicted of any crime.

“I just want to let everyone know that I am safe in here and it’s definitely a lot better to have the privileges that I do have now and I’m getting better and I’m feeling healthier and happier,” Butler said during an interview with InDepthNH.org Wednesday.

Wearing prison garb, Butler met a reporter in a small room at the Secure Psychiatric Unit with a corrections officer standing guard outside with Jeff Lyons, the spokesman for the Department of Corrections who helps arrange media interviews.

Butler has become the focus of a longstanding debate about the state transferring civilly committed people with mental illness to the state prison when they are deemed unsafe to be housed at the New Hampshire Hospital, the state’s psychiatric hospital.

Butler said he has been allowed much more freedom during the last two days, able to have contact visits and talk with other patients. He can now watch television five hours a day, but before that was locked in his cell most of the time after being transferred from the New Hampshire Hospital in January.

“I just had to prove that I wasn’t going to hurt anyone,” Butler said about how he obtained the new privileges. When he first arrived, he was handcuffed and guarded by two officers at all times, then one officer. He said he was tasered and pepper sprayed early in his stay.

“I wasn’t myself, not like I am now,” Butler said.

Butler was quick to bring up what he called the “Butler walk,” laughing again, that his father recently told him about. His supporters are planning on Thursday to walk the two miles from the state prison to the State House to the U.S. District Court on Pleasant Street in Concord to “Free Andrew,”  a walk sponsored by human rights advocates.

There will be a news conference before a hearing inside U.S. District Court at 11 a.m. for a scheduling conference on Butler’s habeas corpus petition demanding he be transferred to a certified psychiatric hospital, rather than the prison’s Secure Psychiatric Unit.

His attorney Sandra Bloomenthal argued in the petition that Butler is being denied his Constitutional rights by being locked up in prison without a criminal charge or conviction.

In the original petition, Bloomenthal argued, “He is locked down 23 hours a day. He has been tasered. The treatment he has received is cruel and unusual punishment without having been convicted of a crime and with no pending criminal process.”

Butler said he became depressed after his leg was injured while running when he was a student at the Worcester Polytechnic Institute. He said he could barely walk although nothing showed up on an Xray or MRI.  He lost his partial scholarship during his last semester because he passed only two courses and was supposed to pass three after the first semester of his sophomore year and he dropped out, Butler said.

His troubles worsened last July, Butler said, when he took the hallucinogen drug psilocybin, and landed in a psychiatric hospital in Vermont. Butler said he then moved home to Hollis with his father, but the colorful hallucinations he saw using the illegal drug continued. In December he was taken into custody by the Hollis police after he was found running in the woods and punching trees, he said.

Those charges were dropped. Butler said he is taking low doses of Depakote and other prescribed drugs and has been diagnosed with schizophrenia.

“I think it is difficult to give a diagnosis to mental illnesses because everyone is an individual. We’re unique,” Butler said, adding his symptoms are close to those of a schizophrenic.

Butler said he doesn’t know whether the illegal drugs he took in Vermont triggered the illness or if it is somehow hereditary.

At first, he was embarrassed by what was happening to him and upset that his father spoke publicly about his stay in the prison, but he now believes his father did the right thing and he can’t wait to have their first contact visit on Saturday.

“My dad is my number one supporter.  I do appreciate all the support I’m getting from him and my friends and the love they are showing and the Butler walk thing, that surprised me,” Butler said.

“It’s definitely been hard living in seclusion for so long but I should be out within a month or two. I should be back in the community within the next two to three months if everything goes as planned,” Butler said.

The state won’t say how long Butler will stay or anything about his case because of privacy rules.

He credits his exercise regimen for helping him feel so much better. He does 500 to 1,000 burpees a day. A burpee is a squat thrust performed in four steps starting in a standing position then moving to a squat position with one’s hands on the ground. He demonstrated how they are done during the interview.

“I think it can help with everyone’s mental health. I think everyone’s a little crazy,” Butler said. “It’s been doing wonders for my mental health and overall happiness. It’s just discipline and there’s not much to do in here. I just exercise and talk with people now that I can.”

He said he grew his beard to fit in as a prisoner. “I’m kind of in a prison and I kind of want fit into the persona of a prisoner,” Butler said.

And he doesn’t mind being locked up with convicted criminals.

“I met some really good people who killed people before and I would never have guessed they did anything like that. Everyone seems pretty chill,” Butler said.

Except when there are outbursts.

“I got in a couple when I first got here. I was tasered and I was pepper sprayed here. I don’t really want to talk about it,” Butler said.

He looks forward to getting out and thinks about the progress he is making.

“It sucks that I’m missing a good portion of the summer. We don’t know how many summers we have left with friends. We are going to grow up soon and go off to different places. It’s a real shame this is happening, that this process is taking so long,” Butler said.

And then he thinks about Thursday’s “Butler walk.”

“I just can’t believe it’s happening. It makes me laugh every time I think about it, like the community getting together to get me out of here, which I think is awesome,” Butler said. “I think we’ll be able to pick up right where we left off.  I think the future’s bright. They might treat me a little differently, but that’s OK. I’m strong. I’ll be able to deal with it.

“I’m excited for the uncertain future.”