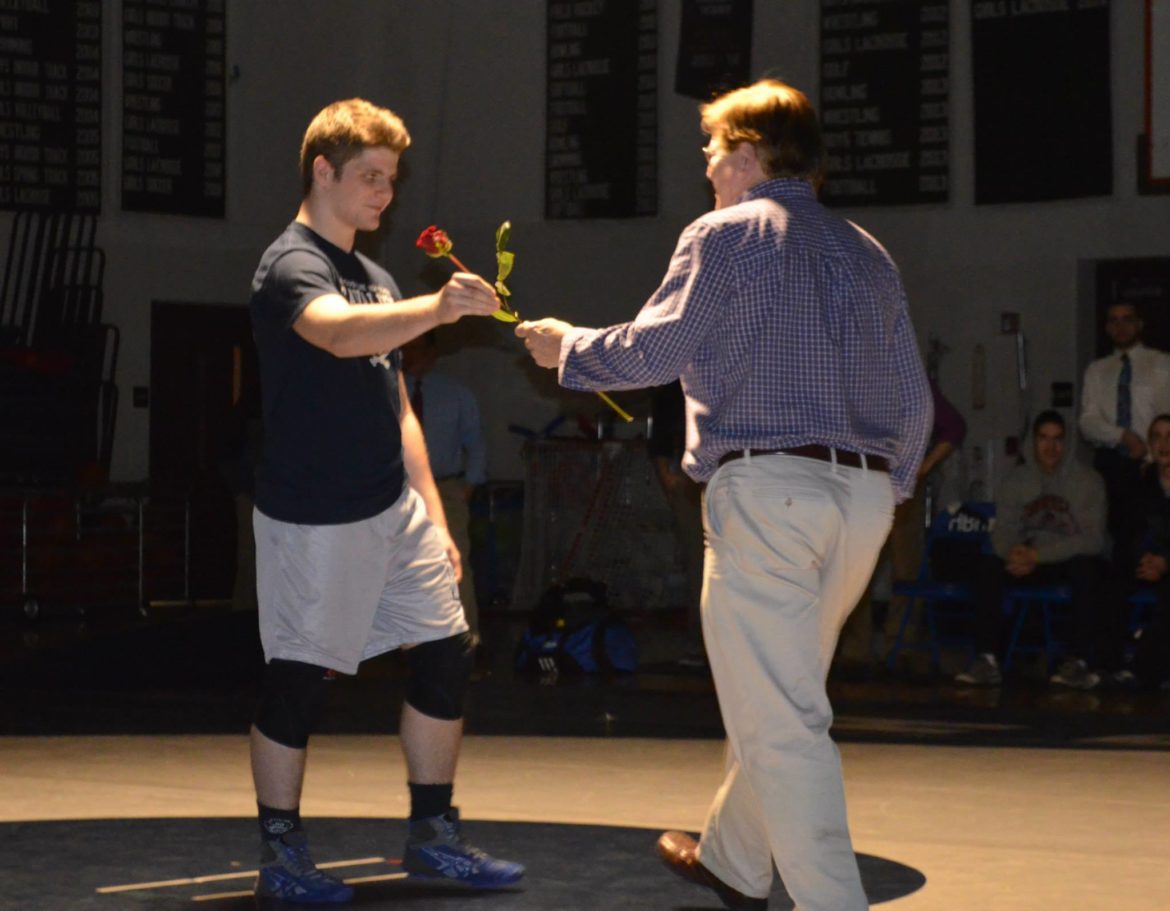 Andrew Butler, who excelled in wrestling, is pictured with his father Douglas Butler in 2015

CONCORD — Andrew Butler’s father says the state is trying to hide its federal court response to his son’s demand for transfer out of the prison’s Secure Psychiatric Unit because he hasn’t committed a crime by filing some of the documents under seal.

Douglas Butler of Hollis said he is not able to see some of the documents the state Department of Corrections filed Thursday in U.S. District Court in Concord because the state filed a motion to seal some from public view.

The state was responding to Andrew Butler’s writ of habeas corpus demanding to be moved from the prison unit to a certified psychiatric hospital arguing his Constitutional rights are being violated by being held in prison.

“It’s clear they don’t want the public to see. They don’t want reporters to see and it needs to be made public,” Douglas Butler said. “I have a right to see them. He’s my son.”

Andrew Butler was a popular star athlete at Hollis Brookline High School before going on to Worcester Polytechnic Institute, then suffering what his father believes was a reaction to experimentation with illegal drugs last summer. The community of Hollis has thrown its support behind his son raising money and signing a “free Andrew” petition.

Andrew’s case has sparked wider interest, too, in halting the practice of commingling mentally ill convicted criminals with patients who haven’t been convicted of a crime in the men’s prison.

Lawmakers now say will make changes in the next legislative session to stop the practice and in the meantime will require the Department of Corrections to seek accreditation for the Secure Psychiatric Unit as a prison behavioral unit.

The state’s motion Thursday asked the court to seal the memorandum of law accompanying its Motion to Dismiss along with all attachments “given the confidential health information that is contained in the filings, including information regarding the mental health of the petitioner.”

Senior Assistant Attorney General Lynmarie Cusack wrote that any proceeding in state court relative to such issues is confidential unless waived. She asked for the same protection in federal court unless waived by Andrew Butler or “an appropriate representative.”

Bloomenthal said the state is trying to “hide under cover of HIPPA protection,” which is the federal Health Insurance Portability and Accountability Act of 1996 that was intended to provide data security and safeguards for medical information.

In the original petition, Bloomenthal argued that “He is locked down 23 hours a day. He has been tasered. The treatment he has received is cruel and unusual punishment without having been convicted of a crime and with no pending criminal process.”

Andrew Butler is guarded by correction officers rather than cared for by mental health workers, according to the writ.  “There is a group of cages used to hold detainees falsely labelled as ‘treatment booths.’ The petitioner is incarcerated rather than hospitalized under color of law by the State of New Hampshire,” Bloomenthal wrote.

In the state’s public motion to dismiss, Senior Assistant Attorney General Cusack said the federal court lacks jurisdiction, the petitioner has no standing, and the Eleventh Amendment to the United States Constitution bars this action. A memorandum of law and its exhibits are being filed under seal, Cusack said, asking the court to dismiss Andrew Butler’s petition.

UPDATE: Cusack said the state isn’t trying to hide anything. The state is “concerned about confidential and personal information” of Andrew Butler. Certain documents will be filed under seal unless confidentiality is waived and the court orders otherwise, she said.

The state says non-criminal patients are transferred from the New Hampshire Hospital to the prison psych unit only when they are deemed a danger to themselves or others and can’t safely be held at the hospital.

Although legislators such as Rep. Renny Cushing, D-Hampton and advocates Beatrice Coulter and Wanda Duryea have been fighting to stop the practice for several years, Andrew Butler’s case has drawn widespread attention.

State Sen. Kevin Avard, R-Nashua, has mentioned him by name on the Senate floor and promised to work in the next session to make sure the practice is stopped.

Douglas Butler has found himself under a spotlight that is new to him and uncomfortable at times, but insists he must speak out to get Andrew out of prison.

“I don’t want it under seal,” Butler said of the court documents. “I want to see it and they have tried to hide a lot of things.”

The state says Andrew has been committed to the New Hampshire Hospital, the state’s psychiatric hospital, for two years.

Butler said he had no idea that his son could be transferred to the prison psych unit, but was tricked months ago into agreeing when he was told it would just be for a few days for observation. He said the state also removed him as Andrew’s guardian.

“They are trying to bury this,” Butler said, adding he can now only have a brief visit with his son on Saturdays.  “I want it public. They have cut me off from my son.”

A hearing has been scheduled for May 24 at the federal courthouse in Concord.