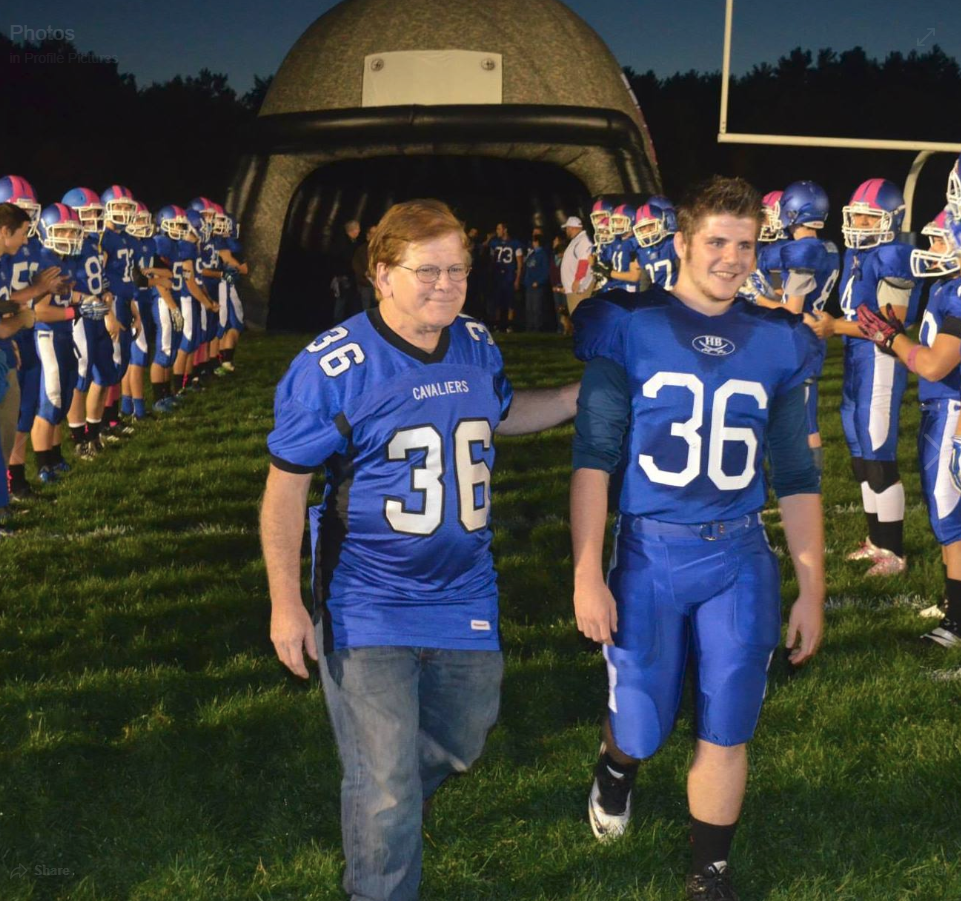 Andrew Butler is pictured with his father Douglas Butler in 2014 while he was still a student at Hollis Brookline High School.

The town of Hollis has united behind Andrew Butler, a popular, outgoing former high school star athlete who is locked up in the Secure Psychiatric Unit at the state prison for men in Concord even though he hasn’t committed a crime.

John Porter isn’t exactly sure what is happening with Andrew, the 21-year-old son of Douglas Butler, but he has pledged his full support as have dozens of other members of the Hollis community.

“I am definitely going to do whatever it takes to help Andrew,” said Porter, whose son Evan is close friends with Andrew. “He’s loved, I can tell you that.”

Porter, who sells real estate in Hollis and coaches local sports, said Andrew was never a troubled kid and was always social, smart, athletic and fun to be around. He spent a year and a half studying at Worcester Polytechnic Institute before leaving school.

“He can be a real clown,” Porter said remembering ski outings and vacations that Andrew shared with his family.

After InDepthNH.org published a story Friday about Andrew’s situation, more than 600 people signed a petition to get him released from the Secure Psychiatric Unit. A “Free Andrew Butler” page set up on You Caring by one of his friends quickly raised more than $800.

“I know him well,” Porter said. “I love Andrew.” His son Evan is coming home from college in a couple of weeks, and he is also eager to help, Porter said.

Porter learned of the situation in a story about a writ of habeas corpus Andrew’s lawyer filed in federal court last week seeking his release from prison to a mental health treatment facility.

“He is locked down 23 hours a day. He has been tasered. The treatment he has received is cruel and unusual punishment without having been convicted of a crime and with no pending criminal process,” Bloomenthal wrote.

Department of Corrections spokesman Jeff Lyons said he couldn’t confirm that Andrew is being held at the Secure Psychiatric Unit because of confidentiality rules.

Lyons couldn’t comment on the writ filed in federal court and Assistant Attorney General Rebecca Ross said she would find out who in the office is handling the case, although the office may not have been served the writ as yet.

Andrew’s father, Douglas Butler, said his son is unaware of the outpouring of support from his hometown.

“I can only go visit him one day a week,” Butler said. “He can’t phone me because the phones don’t work. And I can’t call him. It’s an awful situation.”

He thinks his son had a reaction to experimenting with illegal drugs last fall. He believes the psychotropic drugs prescribed to his son at the prison unit make him worse, but the state removed his guardianship so he has no input in his son’s treatment. He doesn’t believe his son could suddenly become psychotic.

Andrew was civilly committed to the New Hampshire Hospital, the state’s psychiatric hospital. But civilly committed patients can be transferred to the prison unit if they are considered a danger to themselves or others and can’t safely be housed at the hospital.

“When he was in New Hampshire Hospital, I could go up and we could eat pizza together any time, but in prison all that is gone. It is a prison, that’s what it is,” Butler said.

Butler has contacted state Rep. Renny Cushing, D-Hampton seeking help. Cushing has been fighting to stop the practice of incarcerating people in the Secure Psychiatric Unit who haven’t committed a crime with convicted criminals who are mentally ill.

Cushing’s most recent legislation, House Bill 1565, will be voted on Wednesday in the state Senate. Cushing said the bill has been gutted. Instead of requiring the Secure Psychiatric Unit be accredited by the Joint Commission as a psychiatric hospital, the bill would require accreditation from the National Commission on Corrections Health Care as a behavioral health facility.

“This amendment will make the situation even worse, as it signals the further normalization of treating people with mental illnesses as worthy of treatment in a prison setting, and strengthens the institutionalization of prison standards for treatment of people with mental illness who have never been convicted of a crime,” Cushing said, adding he will continue to fight to have the original bill passed.