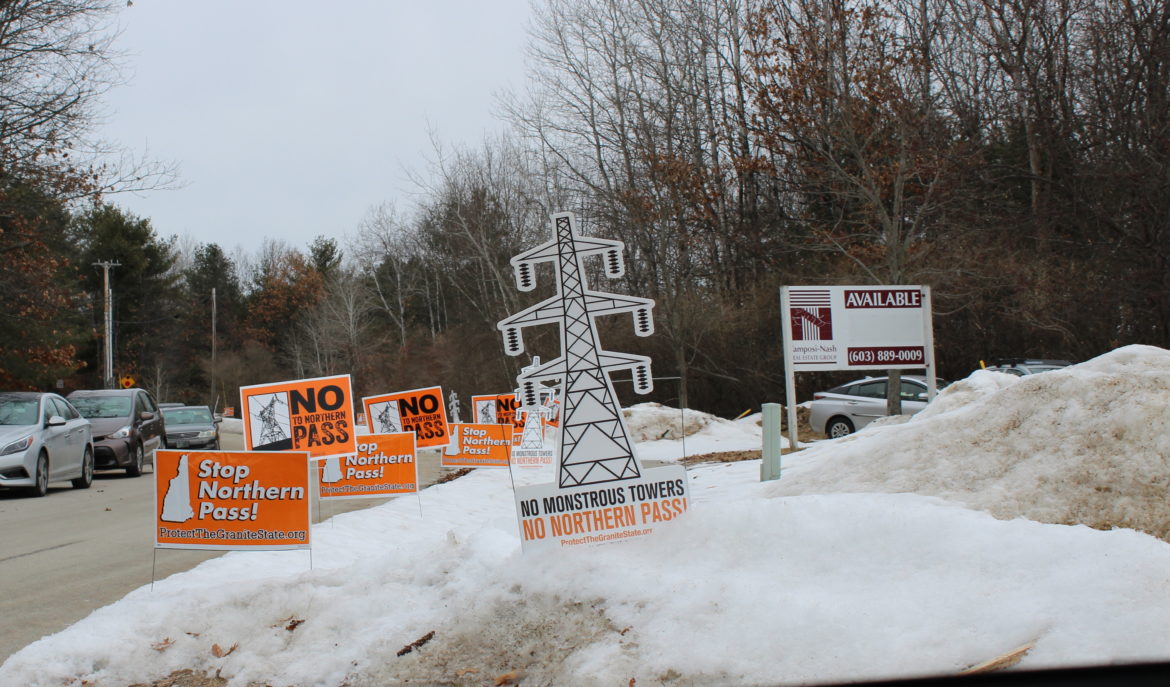 CONCORD — The Mass. Office of Energy and Environmental Affairs will “monitor and evaluate” the Site Evaluation Committee’s “shocking” decision Thursday to deny Northern Pass’s application to build a controversial 192-mile transmission line from Pittsburg to Deerfield.

Northern Pass’s bid was recently selected as the sole proposal of 46 to provide 1,200 megawatts of renewable electricity for the Massachusetts Clean Energy Project and had two months to negotiate contracts with that state’s utilities before going before regulators.

In announcing the selection, Massachusetts energy officials said one of the key reasons was Northern Pass’ ability to begin operations in 2020, at least two years earlier than other proposals.

As opponents of Northern Pass celebrated Thursday’s unexpected vote 7 to 0 to deny Eversource Energy/Northern Pass’ application, reaction was quick from the business community and opponents.

The SEC members said the project does not meet the criteria that it would not negatively impact orderly development of the region. The decision ends eight years of controversy and opposition since Eversource announced in 2010 the plan to bring Hydro-Quebec electricity to the New England grid.

Jack Savage of the Society for the Protection of New Hampshire Forests, said the committee rejected a proposal that has had fundamental flaws since the beginning. “That is why they could not make their case,” Savage said, noting the committee clearly listened to the people impacted by the project and local officials along the line, most of whom were opposed.

“In identifying the multiple reasons behind their conclusion, the subcommittee members discussed exactly the right issues: undue interference with land use, property values and tourism, and inadequate outreach to communities,” said Savage. 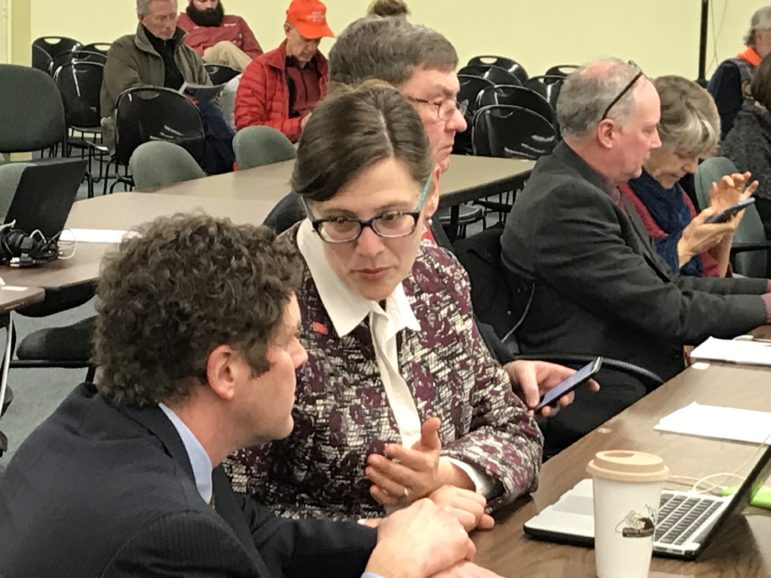 Society for the Protection of New Hampshire Forests attorneys Amy Manzelli, right, and Jason Reimers are pictured in the foreground at Thursday’s session along with Will Abbott, Jack Savage and Jane Difley.

“Clearly, the SEC process is broken and this decision sends a chilling message to any energy project contemplating development in the Granite State.  We will be seeking reconsideration of the SEC’s decision, as well as reviewing all options for moving this critical clean energy project forward,” Murray said.

Opponents of the $1.6 billion project told a different story saying state regulators made the only decision they could under the state law.

“…New Hampshire Sierra Club would like to recognize all of the people who stood up against the Northern Pass in New Hampshire and our dear friends of the Pessamit Innu First Nation who opened our eyes to the destruction of their land and culture by Hydro-Quebec. Truth does not fall to injustice,” Corkery said. 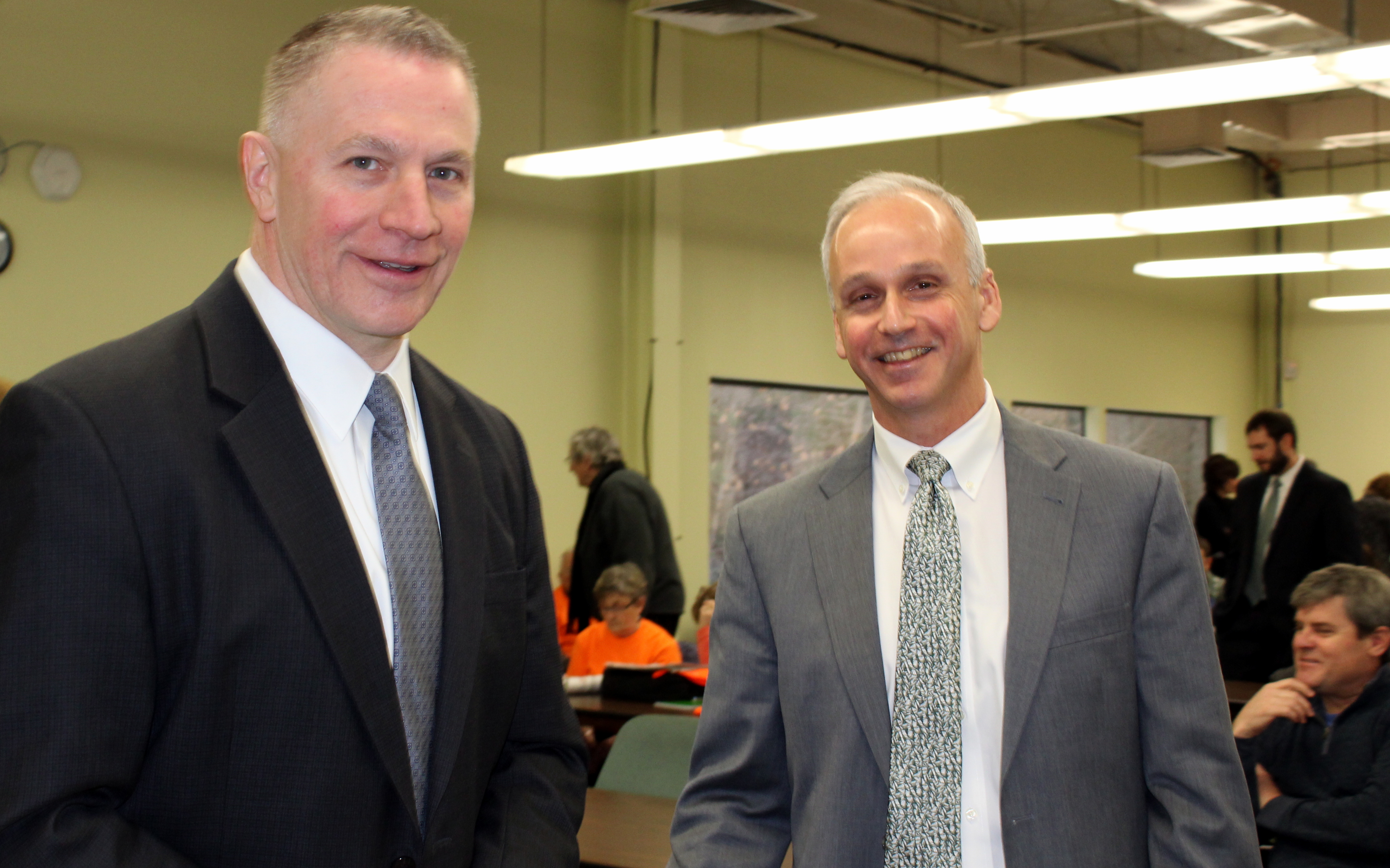 The project had the backing of business organizations and large companies as well as labor unions whose members would have helped build the project.

Michael Skelton, president and CEO of the Greater Manchester Chamber of Commerce, said the SEC decision was shocking and disappointing.

“The SEC process has been bogged down by delays since its start and the sudden dismissal of the project further highlights the flawed nature of this process,” Skelton said.

“This decision will have a chilling effect on energy infrastructure development in New Hampshire for the foreseeable future and I’m very concerned with the impact it will have on our economy.”

Brian Murphy, business manager for IBEW Local 104 said: “Today’s actions by the NH Site Evaluation Committee to deny a permit to Northern Pass are a major disappointment to the working families of New England.  After years of collecting evidence and data, in the end it appears that the SEC made their decision base on special interest opinions and not the facts. IBEW Local 104 looks forward to working with Eversource to continue to move this project forward and will continue our fight for clean energy and local jobs.” 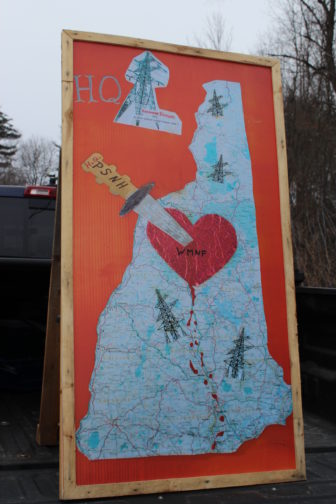 Sign out front of 49 Donovan St., Concord, on Tuesday where hearings were held on Northern Pass.

Opponents of the project claim it would permanently scar the face of the state, hurt the state’s economy, lower home values, destroy sensitive environments and disrupt the lives of those along the route.

Eversource Energy/Northern Pass has 30 days after the committee issues its written decision to ask for a rehearing or to reconsider its vote.

If that is granted, a rehearing would be held before the SEC, said attorney Michael Iacopino, but if it is denied, Eversource would have 30 days to appeal the decision to the Supreme Court, which would determine whether it was unreasonable or unlawful.

Depending on the court’s decision, Iacopino said, the SEC could rehear the case and may have to go back to the beginning and start over again. “We would do what the court says,” he said.

The SEC earlier this week concluded Eversource has the financial, technical and managerial capability and experience to construct Northern Pass. 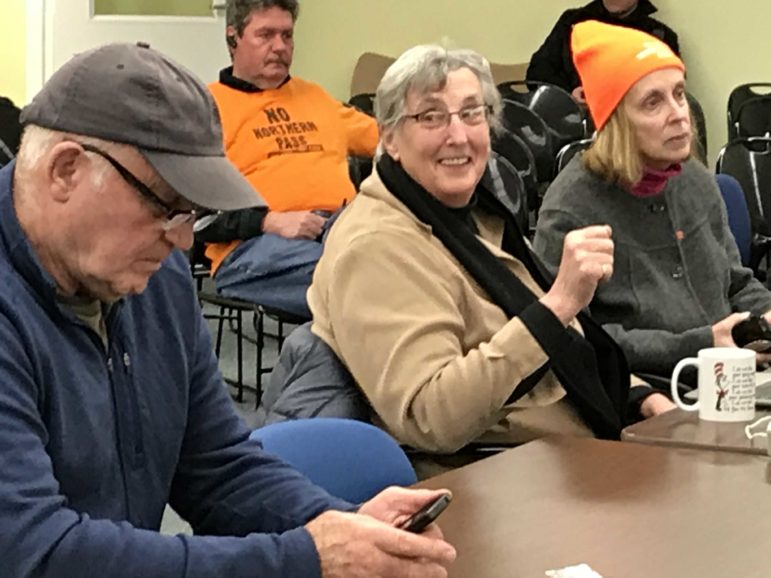 Long-time opponent Susan Schibanoff of Easton said “The SEC did the right thing today by law and by the people of New Hampshire.”

SEC chair Martin Honigberg said there were “a lot of holes” in the applicant’s arguments that the project would not negatively impact property values, tourism and recreation, businesses, land use, and community services and infrastructure.

“It’s all inadequate to me,” Honigberg said. “If things were overwhelming in another direction, maybe it could be overcome.”

But, he said, the energy cost savings which would help the state’s economy are very small.

“To the extent (the savings) are realized,” Honigberg said, “they would be realized by any similar project, (they would provide) the same benefits to ratepayers.”

Christopher Way, the Department of Business and Economic Affairs representative on the SEC, said the applicant discounted the project’s effect on small businesses by “washing it away by simply referring to business as whole, particularly in the underground route.”

Way referred to the 52 miles of buried line from Bethlehem to Bridgewater.

Eversource witnesses used a similar method to say property values would not be affected, Way said, adding their conclusions did not pass “the straight face test.”

“In smaller projects (developers) have worked out agreements with local officials so there is not undue impact to orderly development,” Bailey said. “Unfortunately, that is not the case in this instance, that was not done.”

The committee initially voted 5-2 to deny the project, but the no votes, Honigberg and Patricia Weathersby said they were voting to continue deliberations and would have voted to deny the application, so the motion was reconsidered and the vote to kill the project was unanimous.

Thursday was the third of 12 scheduled deliberative sessions. Instead of meeting through the rest of February, the committee voted to adjourn Thursday and go home.

The seven-member committee said earlier in the day project developer Eversource failed to meet its burden of proof that the project would not negatively impact the orderly development of the region, one of four criteria that must be met for approval.