The hearing room at 49 Donovan St. in Concord was filled Tuesday as state regulators began deliberating the fate of Northern Pass.

CONCORD — The devil is in the details.

While Site Evaluation Committee members are in general agreement that Eversource has the financial, technical and managerial capability to construct and operate the 192-mile Northern Pass transmission project, they believe loose ends and gaps need to addressed.

“I’m most concerned about attention to detail,” said Kathryn Bailey, vice chairman of the Site Evaluation Committee. “With other big projects, there is a rush to get finished and the details slip away. . . . We need to get the details right.”

The process needs to be slowed “down a little bit,” she said. “That may make it worse if it goes over to another construction season.” 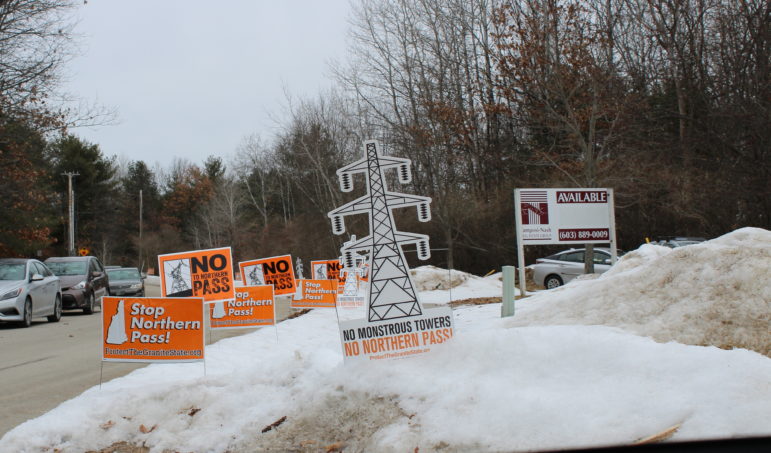 Project officials have said if construction begins this spring, the high-voltage transmission line would be operating by the end of 2020, which is a requirement for the Massachusetts Clean Energy Project.

He said the deadline is achievable with conditions the company suggested, but would not speculate about possible committee-imposed provisions.

“Ideally we would like to start construction in April,” Quinlan said, “but we recognize it may be reasonable to delay that a little bit to mid-year.” 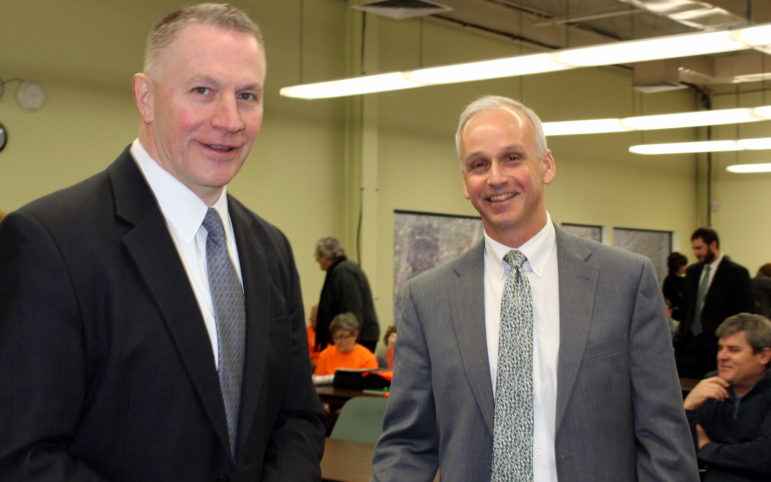 The Massachusetts energy officials last week announced Northern Pass was the only project selected to negotiate with that state’s utilities to provide 1,200 megawatts of hydro-generated electricity.

Northern Pass, which would run from Pittsburg to Deerfield, has two months to negotiate and then Massachusetts state regulators will have to determine if the 20-year contract is approved.

During Tuesday’s deliberations, Bailey and other members of the committee questioned if a project the size of Northern Pass could be managed effectively to ensure all certificate conditions and requirements are met.

Members of the Site Evaluation Committee deliberated Tuesday for the first of 12 days on the fate of Northern Pass.

One of the four criteria for issuing a certificate is whether the developer has the financial, technical and managerial capability to construct and operate the facility in compliance with the certificate’s terms and conditions.

Much of the discussion centered on management and intervenors often expressed concern during adjudicative hearings: whether current plans are adequate to make an informed decision, and how to ensure requirements and conditions are followed.

Public member Patricia Weathersby noted the committee needs to base its decision on how the developer managed similar projects, but said no similar project exists.

“No one has done a 192-mile project that goes up and down like this one does,” she said. “Can they put the parts together to make the whole?”

Weathersby said project designers, engineers and contractors have the technical capacity to do the work, but said she has “a little more hesitation when it comes to managing the project.” 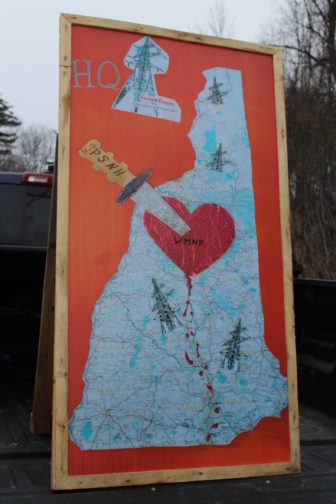 One sign expressed the feelings of the opponents who turned out for Tuesday’s deliberative session.

She and others noted problems the company acknowledges with subcontractors not following best management practices.

She said the loose ends need to be addressed.

“There are loose ends and there are gaps,” said Christopher Way, the Department of Business and Economic Affairs representative on the committee. “Traffic management is a gap. I have no sense how that is going to work in critical areas, how is it going to be managed.”

He was also critical of the company’s outreach program saying it is more passive than aggressive. “I need to be convinced on the managerial capacity to work with outreach, the on-the-ground ability to meet the daily needs.”

Committee chair Martin Honigberg said, “Everything you try to do to put together a large project and address concerns as early as possible, did not work,” he said. That led to people’s vehement opposition, he said, which was a tremendous problem.

Since then people have been put in place to address outreach, he said, and is confident the issue is being addressed.

“I agree with the Counsel for the Public’s position that they have capable people,” Honigberg said, but the committee needs to ensure they follow best management practices and meet certificate conditions.

Jack Savage, spokesman for the Society for the Protection of New Hampshire Forests, said during a break that Northern Pass is not ready to be built, adding the SEC came away with the same understanding.

“We believe that what is really going on here is Northern Pass is not really ready for prime time and that’s exactly what the SEC was talking about. They (Northern Pass) need to get their ducks in a row before moving forward.

“It’s clear (the SEC) came away with the same impression we did from the hearings over the last year – construction details, traffic management plans, the actual route where it’s going to go – these are questions still left in the SEC’s mind,” Savage said.  “This is a project I would argue is not ready to be permitted.”

The members agreed quickly with Eversource’s financial capability to construct and operate the $1.6 billion, 1,090 megawatt project to carry Hydro-Quebec electricity to the New England grid. 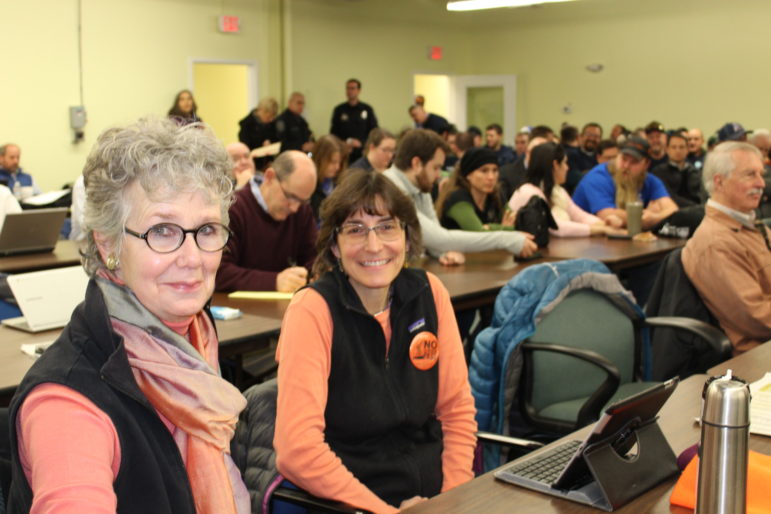 Half of the project will be funded by Eversource equity and debt will pay for the other half, according to the company.

The Counsel for the Public believes the company has sufficient financial capacity to build the transmission system, but other intervenors say without knowing the financial standing of Canadian provincial company Hydro-Quebec, it is difficult to determine the project’s financial standing.

Others question whether the Transmission Service Agreement between Eversource and Hydro-Quebec is up-to-date and capable of protecting Granite State ratepayers.

The current TSA will need to be revised with Northern Pass’s selection for the Mass. Clean Energy Project and members suggested the SEC review the new agreement to ensure protections under the current agreement remain.

Committee members said they will revisit the issues of decommissioning funding and if the company has adequate insurance to pay to dismantle the line in the future.

Orange shirts were worn by some people against Northern Pass and navy blue by those in favor at Tuesday’s first day of deliberations on the project in Concord.

The committee also began discussions about construction in state and local roads, traffic plans and the impacts of the work.

After a lengthy discussion, the committee made no decision and will revisit the issue of who has the authority to approve work on or under local roads.

Eversource wants the SEC to hire an independent consultant to review and approve work on local roads with enforcement lying with the committee, rather than working with local officials in the 31 host communities.

The company originally proposed the Department of Transportation oversee, authorize and enforce conditions and requirements on non-state roads, but the agency said it does not have the legal authority or the resources to perform the work.

One of the chief concerns for a number of committee members is the buried line down Main Street in Plymouth.

Way said he does not believe the proposed work plan will work. “I don’t see how it will work,” he said, noting businesses in the area should be believed when they say the work will harm their businesses as people go to other communities to shop or visit.

The plan to close half of the round-about and using local roads as a detour would be a problem, he said. Without Plymouth’s permission, he said, the DOT would detour traffic over state roads.

The road between Plymouth and Bridgewater is extremely narrow, Oldenberg added. There are a multitude of issues contractors will run into, he said. “They are not show-stoppers, but it will be very complicated.”

Another concern for Oldenberg is the intersection in Franconia where a horizontal direct drilling is planned to bury the line under the intersection. “It should not be a free-for-all for the contractor to decide,” he said, noting it will be one lane 24-seven for weeks.

Tuesday was the first of 12 deliberative sessions ending Feb. 23 when an oral decision is expected.

The SEC is the last state permit needed for the project. The project has all of its needed federal permits expect for the Army Corps approval for wetlands permit.