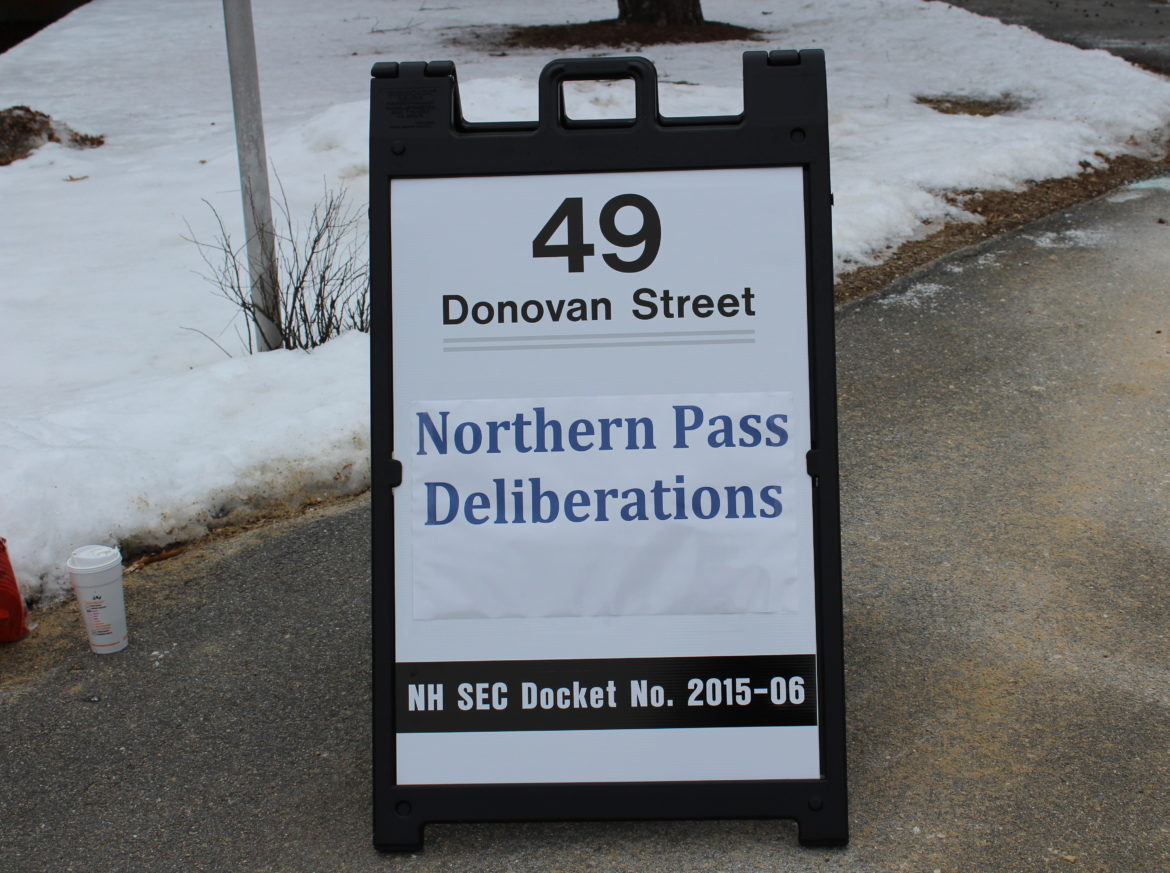 CONCORD — Site Evaluation Committee members challenged the credibility of a number of Northern Pass experts on Wednesday during the second day of deliberations on the proposed $1.6 billion transmission project.

The committee, which is expected to reach a decision on whether to approve the 192-mile, high-voltage transmission line project stretching from Pittsburg to Deerfield by Feb. 23, discussed whether the project would interfere with the orderly development of communities and the region. Orderly development is one of four criteria used to determine if the project will be approved.

The majority of the committee disagreed with Eversource’s experts’ conclusions that the project would not change land use along the existing utility right-of-way, lower property values, or have little effect on tourism.

But they did agree it would would lower electric costs by as little as $5 a year for residential customers to more than $20, and would create jobs, but not as many as projected by the company’s financial expert.

Many intervenors, particularly municipalities, said the project would adversely impact orderly development, would be inconsistent with master plans and would violate zoning and planning ordinances.

The increased use of the easement and the much larger structures would change the land use and the character of their communities, they argued.

Site Evaluation Committee chair Martin Honigberg said it is not surprising that communities along the route are strongly opposed.

Pam Monroe, the administrator of the Site Evaluation Committee, is pictured Tuesday.

“I am more impressed by communities that took the position before Northern Pass was a glimmer in anyone’s eye,” Honigberg said. He noted the opposition is both relative and significant and something the committee should consider.

“You have a different feel if you put in an additional line, an industrial tower in what today has wooden structures 60 feet high,” Honigberg said. “You put in 100-foot or 90-foot towers, that corridor is going to look different.”

Committee vice chair Kathryn Bailey said the impact on land use differs from place to place.

Towns opposing the project like Deerfield and Whitefield say their master plans and ordinances seek to maintain the towns’ rural character, she said. The existing easement in Deerfield includes rural areas and has old-fashioned looking wooden structures, Bailey noted. She asked members to imagine the industrial transmission lines in the right-of-way along Loudon Road in Concord in Deerfield.

“That looks very different than what is there today and not consistent with the town’s rural character,” Bailey said.

Several members noted there is a “tipping point” when the new structures are significant enough to change land use.

“There is definitely a tipping point. The struggle I have is that it is subjective,” said committee member Rachel Dandeneau. “Every person in this room would have a different number for the height of a tower that would make a difference for them.”

Department of Transportation representative William Oldenberg said his concern is with the new 40-mile right-of-way in the north beginning at the Canadian border.

He said the impact on the community and residents who bought homes is difficult and a “much harder component than the existing easement.”

Committee member Patricia Weathersby said the committee may need additional information before making a determination on orderly development. The state has designated utility corridors Northern Pass would not use, she said.

The project’s towers and lines would go through different land uses, from farmland to town centers and agricultural land, she said.

“There really is no way to say that is compatible with existing use,” Weathersby said. “We’ve heard about other alternatives where the effect on land use may be less. We’re not here to study all the alternatives, but we’ve heard about them so we can consider something.”

“There are reasons we have utility corridors because we don’t want utilities running all over the place,  you want to congregate them,” he said. “I keep coming back to the scale, scope and nature of this project. Not only is it significantly different than what is in corridor, they have to make major changes in the corridor for existing lines.”

A 1- to 6-percent reduction in property value for structures within 100 feet of the utility easement is possible, he claimed, but there would be no impact without a transmission line view. 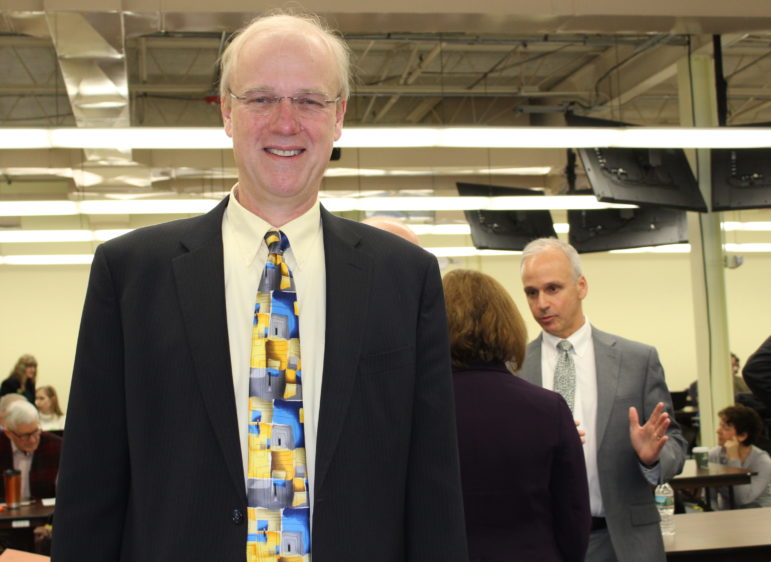 Eversource senior counsel Marvin Bellis is pictured on day 1 of deliberations wearing one of his Jerry Garcia ties.

Honigberg noted there were a number of errors in Chalmers’ work which he acknowledged.

“I did not find him an especially credible witness,” Honigberg said. “He did just not make sense.” Others criticized Chalmers’ analysis for not including commercial properties, hotels, bed and breakfasts, campgrounds, second homes or other structures in primarily tourist areas.

They also said he failed to assess the impact to property values near substations or transition structures.

“I get the feeling this was not a real robust boots-on-the-ground exercise,” said Department of Business and Economic Affairs representative Christopher Way. “This was not tracing the route and looking at every property.”

The committee generally agreed the project would reduce electric rates and create jobs, but they differed on how much and how many.

The Hydro-Quebec electricity would be destined for Massachusetts, but New Hampshire ratepayers will see savings, Northern Pass’s economic expert says, by adding 1,090 megawatts of power to the New England market. The savings increase if Hydro-Quebec qualifies for the forward capacity market.

The forward capacity market pays generators to guarantee they will produce electricity three years in the future, but generators like Hydro-Quebec have to meet price requirements.

Experts for the Counsel for the Public believe there are uncertainties Eversources’s financial expert failed to consider which would reduce the savings and consequently the number of indirect jobs created by the project.

Bailey said despite the uncertainties, if there is any savings from the energy market, there would be a positive impact on the state’s economy. But she said using the higher saving expectations inflates the number of indirect jobs created by several hundred.

Committee members agreed construction would create a substantial number of construction jobs over the project’s three construction seasons. Project officials estimate the jobs would peak at 1,250 and average 582 over the three-year period. Members suggested a small number of new jobs would be created when the line begins operations.

The harshest words for Eversource experts were reserved for tourism specialist Mitch Nichols, who concluded Northern Pass would have little to no effect on tourism.

“Of all the witnesses, (Nichols) was the least credible in my mind,” Bailey said. “He was almost not credible at all. He does not know New Hampshire.”

Bailey does not believe Northern Pass will have the adverse impact on tourism some claim, she said, “but I don’t know what the impact will be from his testimony.”

Way called Nichols work “a missed opportunity,” noting he could have done much more. Nichols did not study the impact construction would have on tourism, which most likely where the problems will be, he said.

“Temporary impacts over time can be permanent,” Way said. “He dismissed wait times people would endure to get to a location suggesting they might tolerate three hours. I’m not tolerating three hours.”

Way said Nichols needed to talk to “the communities, talk about destinations and the routes. You need to interact more with these groups and those charged with tourism-type activities.”

On Tuesday the committee reached general agreement Eversource has the financial, technical and managerial capability and experience to construct Northern Pass, but was skeptical that the project may be too large to effectively manage.

The committee continues weighing the issue of orderly development Thursday.

Wednesday was the second of 12 deliberative sessions ending Feb. 23 when an oral decision is expected.