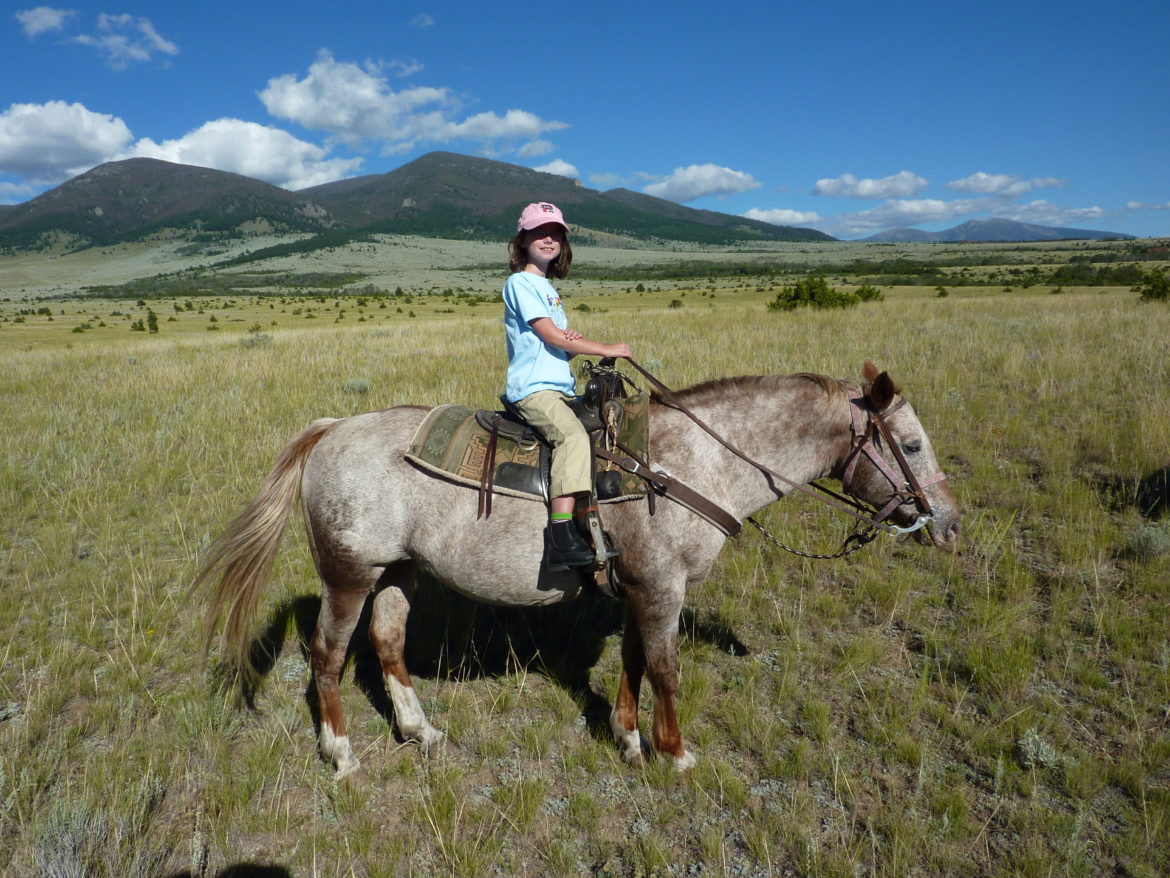 In the spirit of the season, the December 25 edition of this column Power to the People foregoes the usual tales of ratepayer exploitation.  Instead, we visit Montana.

Last month, the Montana Legislature concluded a two-day special session at the State Capitol.  It was a contentious confab, convened by the Democratic governor so that the Republican-led Legislature could deal with a $227 million budget gap triggered in significant part by a hellacious series of forest fires last summer.

The governor called the resulting package of budgetary fixes a “reasonable and responsible compromise.” The Republicans noted they had stood firm against any tax increases.

Cool stuff, for sure.  What made the special session worthy of note in New Hampshire, however, was how it ended.

Representative Kelly Flynn rose with a motion to adjourn sine die.  He began with a peroration.

“I’m a simple rancher and a dad and a husband from Townsend,” the 62-year-old lawmaker told his colleagues.  “You know, I am the guy with the three-legged-cow, the lame horse, the skunk in the barn, and the awful sound effects.” He offered a few samples, suitable for the barnyard, and confessed: “Yes, they’re bad.”

What the heck was he talking about?

I don’t know, but I can guess.  My family and I have heard our share of Kelly Flynn stories and sound effects, after four visits to Kelly’s remarkable guest ranch, the Hidden Hollow Hideaway – 15,000 acres of ancestral Flynn homeland in the foothills of the Big Belt Mountain Range.

“Now most of you know I’ve had a little bump in the road over the past few months,” Kelly told his colleagues.  “I’ve got a little cancer.”

If you’ve been out on the trail with Kelly, you know he is prone to wry understatement – especially when talking about things that are formidable, like the Big Sky for which his home state is famous. This time, Kelly explained what he meant by “a little cancer.”

“It involves, kinda, both kidneys and both lungs and a vein going out of my heart,” he said.

Watching all of this on video, I thought of my first visit to the Hidden Hollow Hideaway in 2010.  I’d traveled to Montana with my daughter Rose, then just 11, because she was excited about horseback riding.

Google had led me to Kelly Flynn’s ranch. I’d noticed he was then seeking his first term in the Montana House of Representations and, on a whim, I figured an aspiring GOP politician would be a terrific host for a New Englander who likes to talk politics but doesn’t always think like a Republican.

Not long after we’d arrived, Kelly asked if I was interested in joining him at “Vacation Bible Camp.”  I was already feeling like a real cowboy, Kelly having put me on the back of the oldest and slowest horse at the ranch. Thus pleasantly out of my comfort zone, I readily assented to Kelly’s proposed side-excursion in his dusty SUV.

“It might not be what you’re expecting,” deadpanned Kelly. Deep into the woods of the Helena National Forest we drove.

Vacation Bible Camp turned out to be quite the party – and notably non-scriptural. 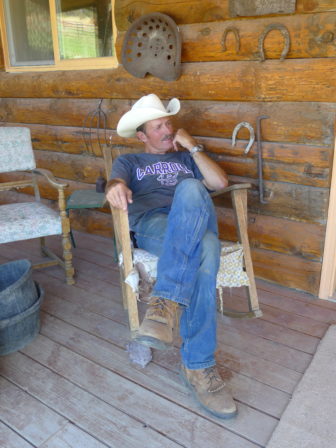 Kelly Flynn sitting outside the tack room of his ranch.

There was an open bar with self-serve hard liquor.  There was barbecue, served up by people who really know how to prepare this stuff.  There was Kelly’s Democratic opponent, Bob Brastrup, who readily agreed to put his arm around Kelly’s shoulder and pose for a photo of two smiling rivals for the same legislative seat.

Kelly politicked.  Bob said nice things about his opponent, and just laughed when I asked why he was doing that.  Apparently there are not a lot of Democrats in Townsend.

Vacation Bible Camp is my secret template for public policy discussions back here in New Hampshire. We can skip the booze and the barbeque as long as there are smiles and fellowship. Did I mention that it is actually a fundraiser for a college scholarship fund benefiting graduates of the local high school?

“I must admit,” Kelly told his House colleagues last month, that “when I first had the diagnosis, you know, I felt sorry for myself.  Mostly because I thought: I’m never going to see my daughters married. I’ll never get the chance to chase grandchildren around.

“Then I realized that people in situations like myself, we have a choice.  You can just wait to die or you can have a new normal.  And I choose the new normal.  I choose that you can live for today.  You can plan for tomorrow.  And you can remember yesterday.” 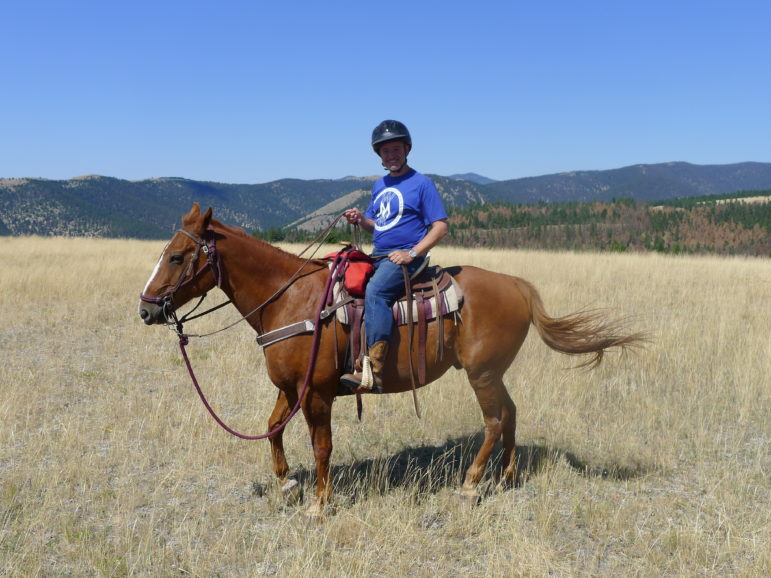 Indeed.  Yesterday, my daughter Rose was a frail kid, struggling with cystic fibrosis, but laughing giddily as she and a bunch of other girls visiting the ranch chased Kelly around on horseback.  Today she is an accomplished rider, working her way through the nine levels of dressage training.  Tomorrow – whenever that comes — she plans on competing in the Olympics.  If she gets there, her cystic fibrosis notwithstanding, Kelly Flynn will deserve some of the credit.

Wrapping up his farewell address, Kelly reminisced about his late brother, recalling they’d agreed in their last conversation “how important it is for us who are temporary stewards of the land to do our very best to pass those values on to those who come behind us.”

That, too, is part of my template for public policy conversations back at home.  A ratepayer advocate who knows that all of us – customers, shareholders, stakeholders – are just temporary custodians of everything we have can, for example, get pretty enthusiastic about energy efficiency.  Squeezing every last bit of work out of every kilowatt-hour we consume is a gift to our descendants.

Nevertheless, in the interest of full disclosure, I must report that Kelly Flynn does have one serious character flaw.  For reasons that I cannot explain, much less justify, this Montana rancher is an inveterate fan of the New York Yankees.

“I consider myself one of the luckiest people in the world,” Kelly told his colleagues. Even a Red Sox fan could detect shades of the legendary Yankee slugger Lou Gehrig and his famous farewell address of July 4, 1939, not long before his untimely death of amyotrophic lateral sclerosis.

I am too preoccupied with proceedings in New Hampshire to follow Montana politics, but I have the impression that things can get pretty contentious out there. So it’s quite something to see a Montana lawmaker, forced by fate to contemplate his mortality, bid farewell to his colleagues by wishing them godspeed and saying: “If it this is the last roundup, I look forward to seeing every single one of you again.”

This floored me. The year 2017 has been challenging for everyone in public life.  Even when the subject is the ostensibly apolitical one of public utility law, and even in a small state like New Hampshire, the legislative discussion is often bitter and acrimonious.  How welcome to be reminded of the very real possibility that ultimately these differences don’t matter.

Fortified with that reminder, the Montana House of Representatives proceeded to vote on Representative Flynn’s motion to adjourn the special session.  I don’t follow Montana politics; I don’t know the rules.  So maybe there’s some partisan reason that fully 37 House members voted against the motion. But I like to think that lots of Kelly’s colleagues simply figured it was too soon to say goodbye.