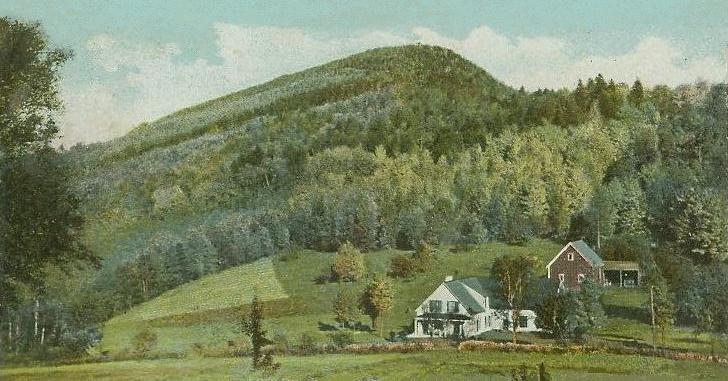 Mount Aggassiz from a postcard

The story of how hay fever, anti-histamines, nervous exhaustion and fake news contributed to the rise – and fall – of the grand hotels in Bethlehem is detailed in an exhibit at The Museum of The White Mountains that is also posted on the Internet.

Professor Linda Upham-Bornstein said tourists were drawn to many towns in The White Mountains because of scenic beauty and that’s been well-studied.

But Bethlehem was different: It became enormously popular because tourists thought it was particularly healthy.

So, the idea was to look at tourism from a different perspective:  the sometimes oddball history of medicine, changes in medical practices and how they shaped a community.

The research was done by students working with Professor Rebecca Noel and Upham-Bornstein with considerable help from the Bethlehem Heritage Society.

One of the major reasons people began going to Bethlehem after the Civil War was relief for “nervous exhaustion.”

“The idea of nervous exhaustion was that mainly the upper-class who were educated, their brains were so overworked and their nerves were so stressed out that they needed time to recuperate,” said student researcher GeorgiaAnne Brown.

“This was very elitist,” she said, “and I was very surprised that a doctor was saying things like “only civilized societies have nervous exhaustion because laborers can’t be stressed out because they are not using their brains.”

Hay fever was thought to be one of the symptoms and Bethlehem – which was relatively free of ragweed – became a popular destination. Indeed, residents were paid to cut down any ragweed.

Eventually Bethlehem had at least thirty hotels, with many visitors spending the summer in a town that student researcher Matthew Roy found described by a 1916 edition of The New York Times as a “mecca of immunity” from hay fever.

Bethlehem’s popularity began to wane in the 1940s as antihistamines became available, more people chose to drive so they could vary their vacation spots and a growing middle-class couldn’t afford to vacation for longer than a week.

The little town was also the victim of a campaign by Florida resorts to persuade tourists that Bethlehem was no longer free of ragweed, student researcher Tyler Tumblety found.

Tumblety said the accusations began in the summer of 1962 with the Miami Herald publishing an article quoting a woman who said she used to visit Bethlehem and it was no longer free of pollen.

That wasn’t true, Tumblety found. Pollen counts were the proof.

But by the early 1970s the town’s hotels had not just faltered but were failing.

“Bethlehem’s tourism economy was the unfortunate victim of modernizing America. Public opinion that falsely claimed Bethlehem was not pollen-free had the power to stop people from going to Bethlehem,” Tumblety wrote.

“The use of false claims and the use of spin are not old tactics; in fact, they’re still used quite effectively today.”

The exhibit is on display at The Museum of the White Mountains.

It opens at the Heritage Society in Bethlehem on July 1st.

But it is also available on line: http://bethlehem.blogs.plymouth.edu/