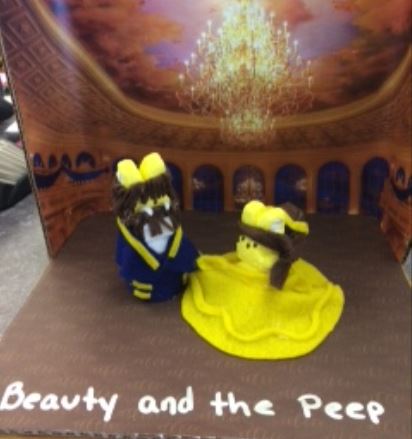 There are contests of which I muse joyfully…the Olympics, the Best Pie at Dover’s Apple Harvest Day, the Academy Awards.

The contest, however, that makes my heart palpitate, the contest of which I try to participate every year? Well, dear readers, that would be Dover Public Library’s Peep Show Contest.

This contest asks participants to “build a diorama using Peeps of any color in a standard size show box. Base your entry on a book…” This contest begins April 3 and entries must be in by April 16.

Judging occurs on the 17th. In years past, winners have included the Goldpeep, a yellow marshmallow creation replaced the goldfinch on the cover. The Scarlet Peeper starred Hester Peep and Alice Hoffman’s Museum of Extraordinary Peeps were two other successful entries.

Should you get the opportunity to visit the peep displays in the library, do go. Some of the submissions are brilliant, some crazy, some utterly ridiculous.

But this display not only looks good, the aroma of sugar in the library is entirely wonderful. Working with peeps as subjects for literary creations is a complete joy.

I created one peep diorama based on the characters of Laura Hillenbrand’s Unbroken. I had a plane, the ocean, a peep in bandages. I did not win. Another year I went for simplicity and put Emily Peepinson in a simple box with her poem, “There is a solitude of space.” Again, I was overlooked.

Alas, simply working on these peep shows is joy unto itself. Peeps are simply one of the best food sources ever.

I live for yellow peeps, the originals, the standard peeps. And I delight in their appearance every Easter.

The marshmallow, the sugar coating – if I were on death row, I’d have peeps as one of my dessert options along with Mallowmars – which are simply peeps enveloped in chocolate and a little less welcoming.

And is it not fabulous to create a diorama? I LOVE dioramas – and every year delight in finding a box and the accoutrements that make a diorama wonderful. Working with glue, cardboard, tiny pieces – I return to fourth grade where I created a mean diorama of Thomas Edison inventing the lightbulb. He was not a peep, but perhaps this year I may re-create that image with a marshmallow creation.

And as you muse joyfully on Easter and peeps and literature and libraries, I invite you to create your own peep diorama – whether or not you have a contest in which to participate.

Peeps and books and Easter – a trifecta of Joyful Musings.

Susan Dromey Heeter, a writer from Dover who recently let her hair go au natural white, writes “Joyful Musings” for InDepthNH.org. Dromey Heeter is a secondary Spanish Teacher at Dover High School and the mother of two teenage daughters.  Writing has been her passion since her English majoring days at the University of Massachusetts in Amherst.  Dromey Heeter has lived in The Netherlands, Alaska and currently basks in all things New England, including the frigid winters. An avid swimmer, Dromey Heeter’s great passion is to bring back body surfing as most children have no idea how to ride waves without ridiculous boogie boards. She also writes about thrift shopping and all things frugal  in a column called “Budget Vogue” for the New Hampshire Union Leader.