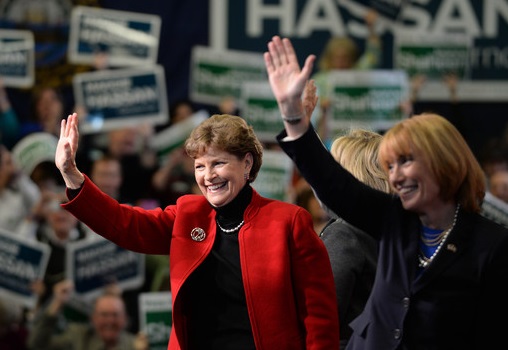 Gov. Maggie Hassan and U.S. Sen. Jeanne Shaheen want more information from the U.S. Department of Energy about why the public and press were to be excluded from two New Hampshire meetings about Northern Pass, according to their spokesmen.

The meetings to identify cultural landscapes along the route of the proposed 192-mile transmission line from Pittsburg to Deerfield set for next week were going to be limited to people and organizations already designated by the DOE as “Consulting Parties.”

The meetings were postponed Thursday after some intervenors who oppose the controversial project spoke out publicly against the closed meetings scheduled for Concord and Whitefield.

Hassan, a Democrat who won Sen. Kelly Ayotte’s U.S. Senate seat in the November election, wants to know more about the meetings that are required under Section 106 of the National Historic Preservation Act, according to her spokesman, William Hinkle.

“The Governor’s Office has reached out to the U.S. Department of Energy for more information about why certain meetings may be closed, and the Governor will continue pushing to ensure a robust public process for all potential siting projects,” Hinkle said in an email.

“In particular, the federal Section 106 appropriately offers public opportunities to comment on the process.

“The Governor believes that the process of listening – and making further improvements – must continue as the state Site Evaluation Committee and federal review processes continue, all of which include public meetings and input,” Hinkle said.

“Senator Shaheen’s office is reaching out to DOE to inquire into why these meetings are private,” Nickel said in an email.

Besides seeking state approval from the Site Evaluation Committee, Northern Pass has also applied for a federal Presidential permit because the project crosses the border between Canada and the U.S. Section 106 kicks in because the project could affect properties listed or could be eligible for the National Register of Historic Places.

“The Governor has made clear that if Northern Pass is to move forward, it must propose a project that protects our scenic views and treasured natural resources while also reducing energy costs for our families and businesses,” Hinkle said.

Northern Pass spokesman Martin Murray said the meetings were not planned or hosted by the applicant.

“As to our perspective, the meetings are planned and produced by the Department of Energy. The project has had no involvement in that planning and any questions about the meetings are best directed to the DOE,” Murray said in an email.

DOE’s Caitlin Callaghan emailed all of the Consulting Parties in New Hampshire on Thursday saying the meetings were postponed on the advice of New Hampshire’s State Historic Preservation Officer because of “communication” concerns.

Also on Thursday, a woman who said she worked for the DOE said such meetings are always closed to the public and press, but she refused to speak on the record with InDepthNH.org.  She was responding to an email request to the DOE for more information.

The federal Section 106 process involves the writing of the Programmatic Agreement, which will spell out how Northern Pass identifies and deals with New Hampshire’s historic resources, including cultural landscapes.

According to Elizabeth Merritt, general counsel for the National Trust for Historic Preservation, the New Hampshire meetings were supposed to identify places that are cultural landscapes and which ones are eligible for the National Register of Historic Places.

The next step would be the determination that the applicant “takes into account” the effect of the project on these historic properties, said Merritt.

According to the Advisory Council on Historic Preservation, they can also include individuals and organizations with a demonstrated interest in the project “due to the nature of their legal or economic relation to the undertaking or affected properties, or their concern with the undertaking’s effects on historic properties.”

Their participation is subject to approval by the responsible federal agency, in this case the U.S. Department of Energy.

Merritt said limiting meeting attendance to Consulting Parties can limit grandstanding and she wasn’t opposed to the practice. Other experts say it keeps the locations of important archaeological sites and protected assets such as plant species from being made public and damaged as a result.

“Agencies must balance the legitimate concerns for privacy with the public’s right to know about the undertaking and its effects upon historic properties,” according to the Advisory Council on Historic Preservation website.

Merritt wrote an article last year called “Worst Practices for Section 106 Consultation,” in which she described a climate of intimidation and exclusion:

“Have you ever been greeted by a ‘bouncer’ who refused to allow you to enter a Section 106 consultation meeting, or escorted you out the door?”

That happened in New Orleans after Hurricane Katrina, she said.

“… when agencies such as FEMA, HUD, and the VA responded to the high level of public interest in protecting historic properties by enforcing rigid restrictions on who could attend consultation meetings and how many representatives from each group could attend.

“The resulting climate of intimidation created an enormous chilling effect on the consultation itself,” Merritt wrote.