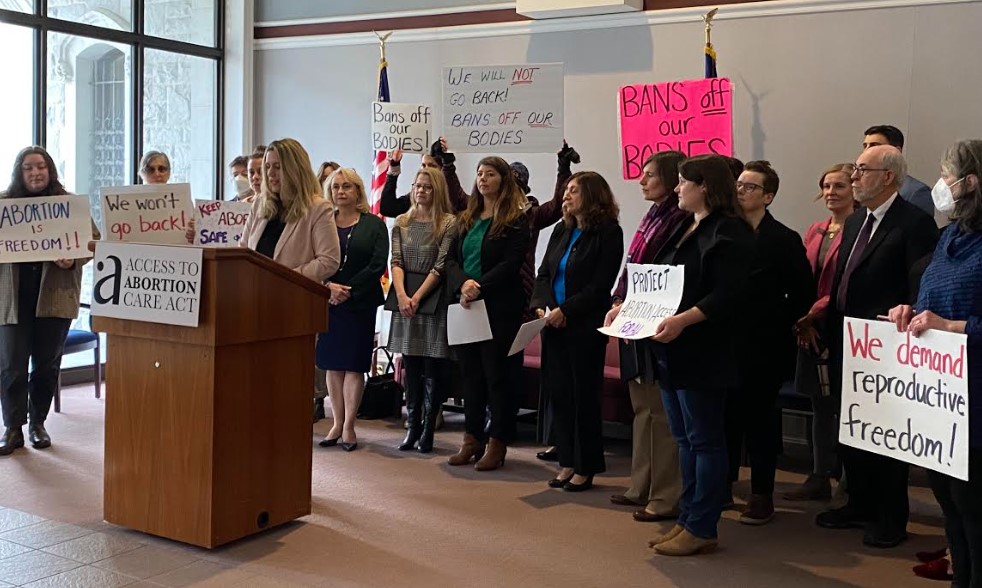 Ahead of 50th Anniversary of Roe v. Wade, Advocates and Lawmakers Speak About Need for State Action to Protect the Future of Abortion Rights in New Hampshire

CONCORD – On Thursday, January 19, 2023, a coalition of reproductive rights advocates, legislators, providers, and patients gathered to re-launch the campaign for the Access to Abortion-care Act in advance of the 50th anniversary of Roe v. Wade.

Sunday, January 22 marks the anniversary of the landmark case that guaranteed abortion rights and is the first time this anniversary will be observed since the Supreme Court overturned the ruling in Dobbs v. Jackson Women’s Health Organization. Without the constitutional right to abortion under Roe v. Wade, state politicians now decide the future of abortion rights, which has resulted in access to abortion being eliminated outright or drastically restricted in large swathes of the country in only seven months.

The Access to Abortion-care Act has been filed in the House and Senate. HB 88 and LSR 2023-0770 would proactively place the right to have an abortion into state law, adding a layer of protection and providing critical assurance to Granite Staters that they can work with providers to get the health care they need in the majority of situations. It does not change any current New Hampshire abortion laws.

After the press conference, the following statements were released:

“On January 22, we should be celebrating fifty years of abortion rights; instead, our country is grappling with a reality in which 1 in 3 Americans have lost access to safe, legal care in their home state,” said Kayla Montgomery, Vice President for Public Affairs at Planned Parenthood New Hampshire Action Fund. “While abortion remains safe and legal in New Hampshire before 24 weeks, without federal constitutional protections the future of our rights is vulnerable because we are the only state in New England without proactive state protections for abortion. This uncertainty causes anxiety – for providers, Granite Staters, and the many out-of-state patients who are already coming to New Hampshire for abortion care. Planned Parenthood and local providers are all committed to providing all patients with the compassionate care they need – no matter what – but we need lawmakers to act now to guarantee the future of abortion rights in our state.”

“It’s time for New Hampshire to draw a line in the sand and ensure that abortion access is protected in state law. Although Granite Staters overwhelmingly and consistently believe abortion should be safe and legal, political attacks on abortion have only increased over the past year. We remain steadfast in our dedication to defending reproductive rights, and will use the full force of the ACLU to protect them in the Granite State,” said Devon Chaffee, Executive Director of the ACLU of New Hampshire.

Senator Rebecca Perkins-Kwoka added, “Across the country, we have seen the devastating impact of the Supreme Court decision to overturn Roe v. Wade. Millions have lost their rights in a blink of an eye. Today, New Hampshire women are standing up to say: we refuse to play the “wait and see” game any longer. It’s time to pass The Access to Abortion-Care Act and ensure the Granite Staters no longer have to worry that their rights will be taken away.”

“These are scary and chaotic times. Granite Staters are looking to their elected officials right now for clarity and security. Passing the Access to Abortion-care Act will show the people of this great state that we understand what is at stake and we are taking these threats seriously and that we trust them, and their doctors,” said Representative Alexis Simpson.

Dr. Danielle Albushies, OB/GYN,stated, “The last year has been a trying time for medical providers and our patients in New Hampshire. It is critical to note that the uncertainty in our landscape of care is not limited to abortion – we’re talking about the entire spectrum of reproductive health care delivery, including prenatal care and miscarriage management. If we continue trending toward less reproductive freedom, it will be challenging to recruit and retain quality physicians who are committed to reproductive health.”

“Abortion – and access to it – has touched every stage of my life. My mother was too far along in pregnancy to have an abortion, so she put me up for adoption. I was able to choose the right time for me to start a family because I had access to abortion care. Now, as a mother, I worry my daughter will not have the same rights and access to care that I did because the Supreme Court overturned Roe v. Wade. Granite Staters are counting on our elected officials. Now is the time to protect the future of abortion rights in New Hampshire,” said Camilla Thompson, a New Hampshire mom and a member of Black Lives Matters Seacoast.

Other Legislation Filed in 2023: