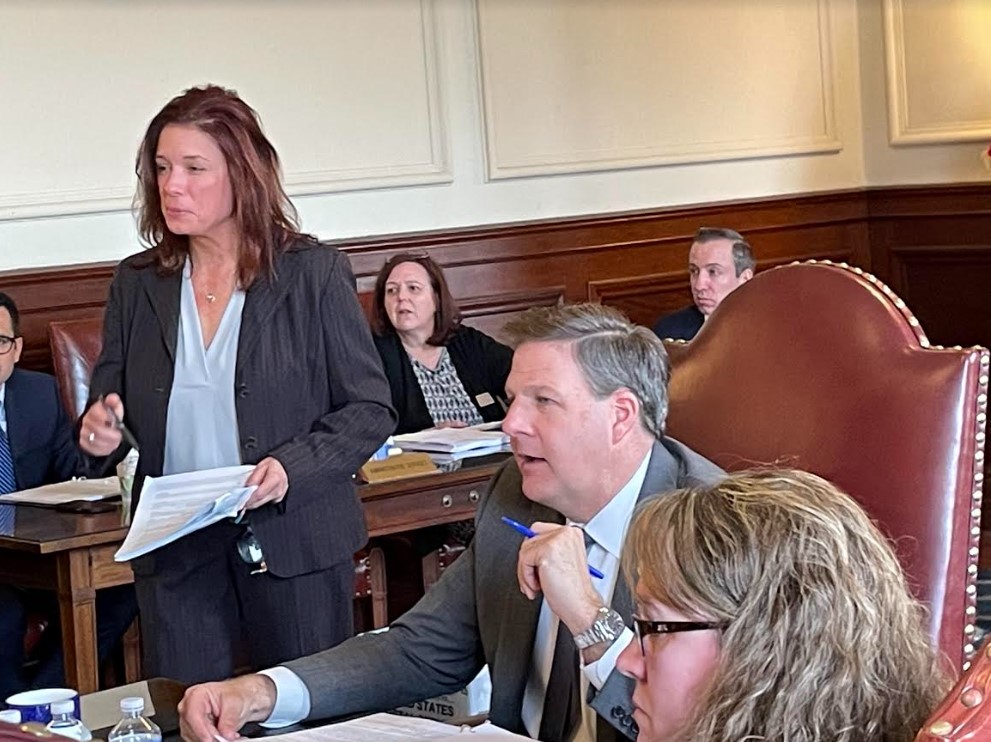 Gov. Chris Sununu is pictured with Lori A. Weaver, interim commissioner of the state Department of Health and Human Services, at Wednesday's Executive Council meeting.

CONCORD – To help aid the homeless crisis in Manchester, the state’s Executive Council approved of the use of the state-owned Tirrell House for the next three years.

Lori A. Weaver, interim commissioner of the state Department of Health and Human Services, said the building will be made available immediately after the vote Wednesday and that it was her understanding it would be used to help house women, though the state does not require that it only be for women if there is a need for others to use the property at 15 Brook Street.

The deal is at no cost to the city. The city will be responsible for all maintenance and repairs; housekeeping and must abide by all applicable law.

It comes at a time when Manchester has been given court approval to remove a homeless encampment on the sidewalk at Pine Street and there is an urgent need to find alternative housing solutions.

On Jan. 11 the Manchester Board of Mayor and Alderman authorized it to enter into a contract with the state for this purpose. The city plans to use the building to house up to 16 women there.

MOVING TOWARD  CLOSURE OF SYSC

With the state moving to close the Sununu Youth Services Center in what the governor believes will more likely be 18 months than the original plan which was to close in several months, Sununu said the architect looking to develop a new, smaller facility is focusing on possibly relocating the facility to Hampstead, Concord or the Manchester area. No final decision has been made.

With the state’s purchase of the former Hampstead Hospital for a mental health hospital for youths, there is a consolidation of this location for youth services, the governor said after the council meeting.

The council approved $38,750 Wednesday to address the property tax base impacts resulting from the sale of the property to the state as the second traunch of money given to the town and the legislature will have to address any future payments, perhaps in lieu of taxes.

In July, it paid the town $139,191 for the purposes of offsetting the impact on the town’s tax base.

The payment made this week is to fully address this year’s tax impact, said Nathan D. White, chief financial officer for DHHS.

JANUARY IS BLOOD DONOR MONTH
Sununu proclaimed January as Blood Donor Month in the state and brought together some families impacted by blood donations. He said that every two seconds, someone needs a blood donation.
He urged all Granite Staters to give the gift of life through blood donations and noted that on March 1, the Cunha Family will hold a blood drive in honor of their late sister, Kristi, at Nashua North High School where she taught.

NOMINATIONS
Sununu has nominated Amy H. Manchester of Hudson as a justice for the New Hampshire Circuit Court.
She is currently a prosecutor in the office of the Manchester City Solicitor.
Nominated for another four-year appointment was Ann H. N. Landry of New London as associate commissioner for the Department of Health and Human Services.