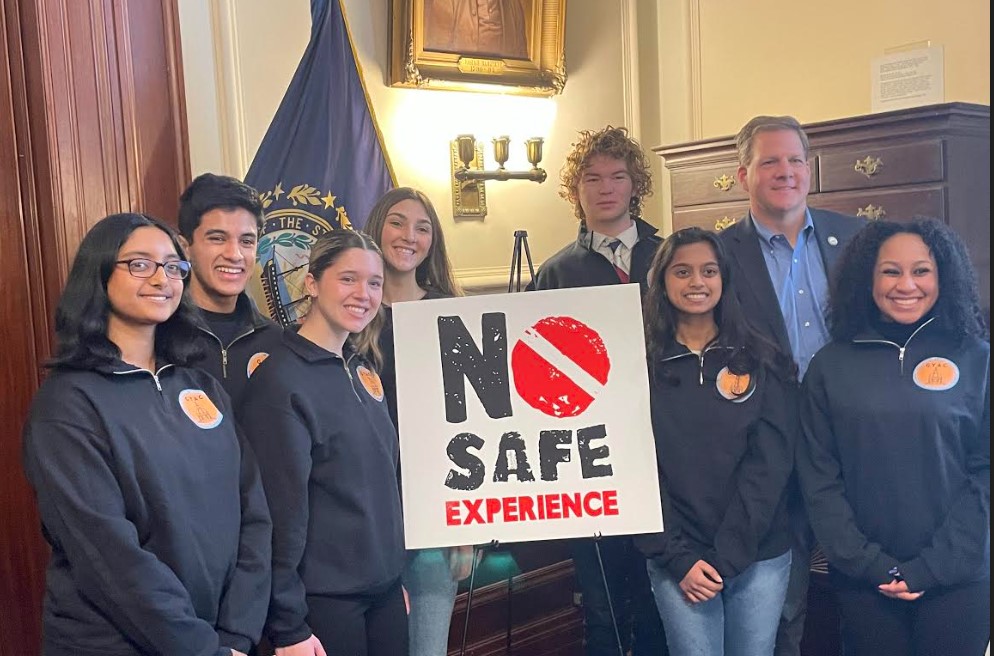 Gov. Chris Sununu is pictured with students from across the state who serve in the NH Governor's Youth Advisory Council Thursday at the State House.

After the press conference, Gov. Sununu’s spokesman sent the following link showing the cost of the program to be $500,500.

Concord, NH – A new public awareness campaign is being built to alert individuals that there is no safe experience when consuming any drugs that have not been prescribed by a medical provider. At a press conference today, Governor Chris Sununu announced a new public awareness campaign titled “No Safe Experience” that will focus on this challenge by educating youth, young adults, and families of the dangers and prevalence of fentanyl in counterfeit pills and illicit drugs.

According to the U.S. Drug Enforcement Administration (DEA), over 50.6 million fentanyl-laced, fake prescription pills and more than 10,000 pounds of fentanyl powder were seized in 2022. The DEA Laboratory estimates that these seizures represent more than 379 million potentially deadly doses of fentanyl – a number that exceeds the entire population of the U.S.

“The bottom line is that fentanyl is now in all different types of substances, whether that be cocaine, methamphetamine, fake pills, or vape cartridges – assume it is in anything and everything,” said Governor Chris Sununu. “There is no safe experience with substances, unless they are prescribed by a provider, and taken only as directed by the person they are prescribed to. Our campaign will be laser focused on this critical message to help save lives.”

Members of the Governor’s Youth Advisory Council on Substance Misuse and Prevention will play a role in the design and development of the campaign’s content.

“Our objective is not to spread fear, but to use facts and education as our greatest tool in preventing substance misuse, and premature loss of life,” said Lyla Buxton, Vice Chair of the Governor’s Youth Advisory Council on Substance Misuse and Prevention. “Part of this campaign will help educate our peers, parents, and community members while encouraging them to have conversations about the presence of fentanyl in substances of all types and the danger this poses.”

According to DEA Laboratory testing results in 2022, six out of 10 fentanyl-laced, fake prescription pills contained a potentially lethal dose of fentanyl, an increase from four out of 10 in 2021. These pills are made to look identical to real prescription medications – including OxyContin®, Percocet®, Xanax® and Adderall® – but only contain filler and fentanyl and are often deadly.

“Fentanyl is 50 times more powerful than heroin and 100 times stronger than morphine and a two-milligram dose is enough to be lethal,” said Colonel Nathan Noyes, who heads the New Hampshire State Police. “That’s the same as a few grains of salt. The intentional and accidental mixing of fentanyl is also becoming more commonly discovered in cocaine, marijuana and even made to look like candy. That’s why there is no safe experience when it comes to experimenting with drugs or taking something that is not prescribed to you.”

The statewide campaign will focus on individuals who may be inclined to try substances without fully understanding what they are, where they came from and what might actually be in them. It will include video and public service announcements, social media campaigns, an informational website, billboards and highly visible signage, posters and materials that will be widely disseminated across the state and made available to schools, and an active media campaign to share that there is no safe experience through personal stories and data. The campaign is under development and is expected to launch in the next 30-60 days and initially run through the fall.

The campaign is being run under the oversight of the New Hampshire Department of Safety.

Note: A copy of today’s press conference can be found here.