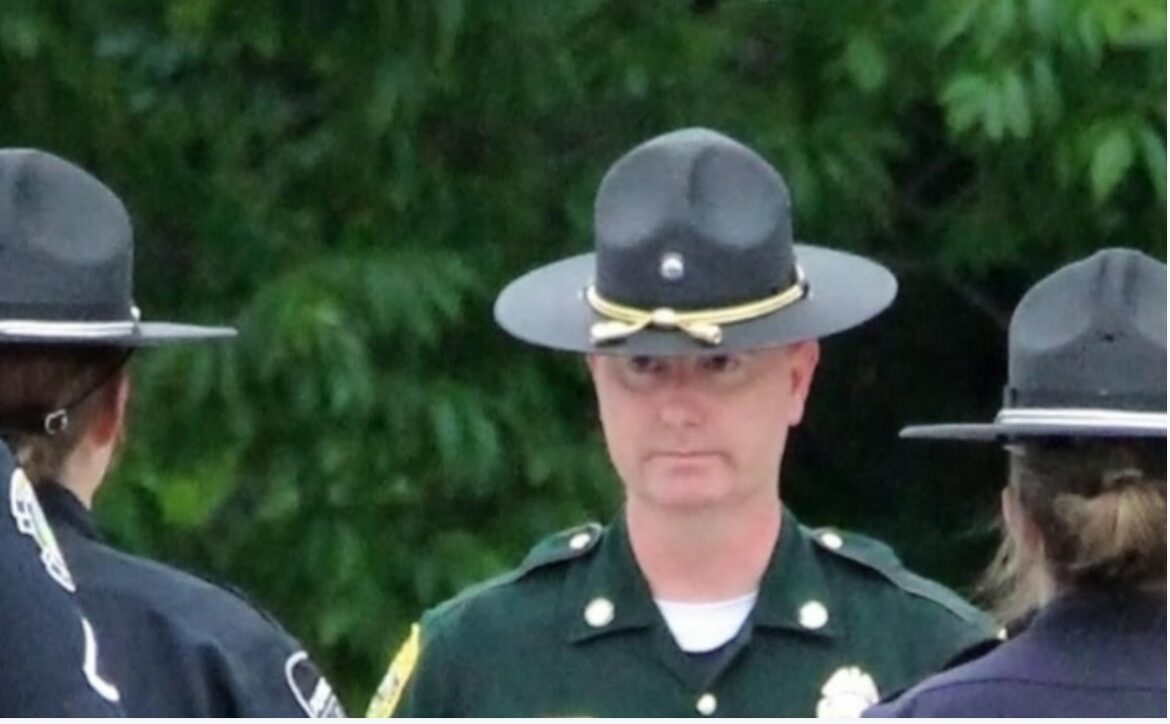 A New Hampshire State Police Trooper investigating other officers’ misdeeds was transferred to the Major Crimes Unit after he was reported for sexual harassment, according to documents obtained by InDepthNH.org.

Sgt. Justin Rowe was serving as an internal affairs investigator for the New Hampshire State Police Professional Standards Unit when a trooper he was investigating, fired Trooper Haden Wilber, made the report against Rowe.

At the time Wilber made the report, Rowe was about to be promoted to lieutenant and set to take over the PSU.

Wilber was fired in August of 2021 after he was investigated by Rowe for the illegal search of a Maine woman which resulted in the state agreeing to pay a $215,000 settlement in order to get her lawsuit dismissed.

In 2021, Rowe was investigating Wilber’s actions surrounding the search of Robyn White. Wilber reportedly lied during a 2017 traffic stop, claiming without evidence that White had hidden drugs inside her body. He’s also alleged to have illegally searched her purse and cell phone. White would end up spending nearly two weeks in jail and no drugs were ever found in or on her person.

During the subsequent internal investigation, Wilber maintained that his searches of White’s phone and purse were part of standard procedure for State Police.

White filed a lawsuit, and Wilber was assigned to desk duty in the Department of Safety’s Gun Line unit, pending the outcome of the Professional Standards Unit investigation headed up by Rowe. When it was announced internally in May of 2021 that Rowe was set to take over the PSU, a female employee in the Gun Line unit, Sandra Roy, approached Wilber about several sexually charged text messages she received from Rowe, according to the statement Wilber would later give to superiors.

“I can’t believe people like that get promoted,” Roy, who no longer works for the state, reportedly said to Wilber.

Roy posted some of the messages to her public Facebook account. They included Rowe telling her she looked sexy when she smokes, that he wanted to see the tattoos she had on her body, and that he was a “Christian Grey looking for an Anastasia Steele.”

Christian Grey and Anastasia Steele are the main characters in the “50 Shades of Grey” novels about a sadomasochistic sexual romance. The Christian Grey character is a sexual sadist in the novels.

After Wilber reported the matter to his superiors, Rowe remained assigned to the investigation into the 2017 traffic stop. In June of 2021, it was announced the Rowe would be leaving the Professional Standards Unit for a position in the Major Crimes Unit. Major Crimes investigates homicides and works closely with the New Hampshire Attorney General’s Office.

The New Hampshire State Police didn’t respond to requests for comment on the allegations against Rowe. Rowe didn’t immediately respond to a message left for him at State Police.

“We can neither confirm nor deny any potential NH DOJ Public Integrity Unit matter responsive to your request, as to answer otherwise could reasonably be expected to constitute an unwarranted invasion of personal privacy pursuant to RSA 91-A:5, IV. See Order Welford v. State of New Hampshire, Division of State Police, 217-2016-CV-00282 (2016).”

It is not known what, if any repercussions, Rowe faced because of the messages he sent to the then-Gun Line employee.

The state recently announced an unrelated criminal case against Litchfield Police Chief Benjamin Sargent for allegedly sexually harassing a female officer in his charge. Over the course of two days over the 2021 New Year’s Eve holiday, Sargent sent several texts and made numerous phone calls to the officer telling her he loved her and inviting her over for a drink, according to the arrest affidavit. Sargent was reportedly heavily intoxicated during these incidents.

There does appear to be a different standard for some in the New Hampshire State Police than for others in law enforcement. Department of Safety Commissioner Robert Quinn was recently accused of illegally instructing Gun Line staff to run a background check on an acquaintance.

The Union Leader quoted Gov. Chris Sununu’s spokesman Ben Vihstadt about the Quinn allegations saying, “Several weeks ago, our office was in touch with the Attorney General’s office.” Vihstadt told the newspaper the governor’s office confirmed that the Quinn matter had been thoroughly reviewed and no further action was warranted.

A week before whistleblower Tiffany Foss came forward to accuse Quinn of misusing the Gun Line system, New Hampshire Attorney General Formella announced he was dropping the case against former Ossipee Police Officer Justin Swift, who was accused of conducting an illegal background check while on duty.

Swift was decertified as a police officer by the New Hampshire Police Standards and Training Council with the understanding that the decertification will be entered into the National Decertification Database and his name was placed on the Exculpatory Evidence Schedule also known as the Laurie List,