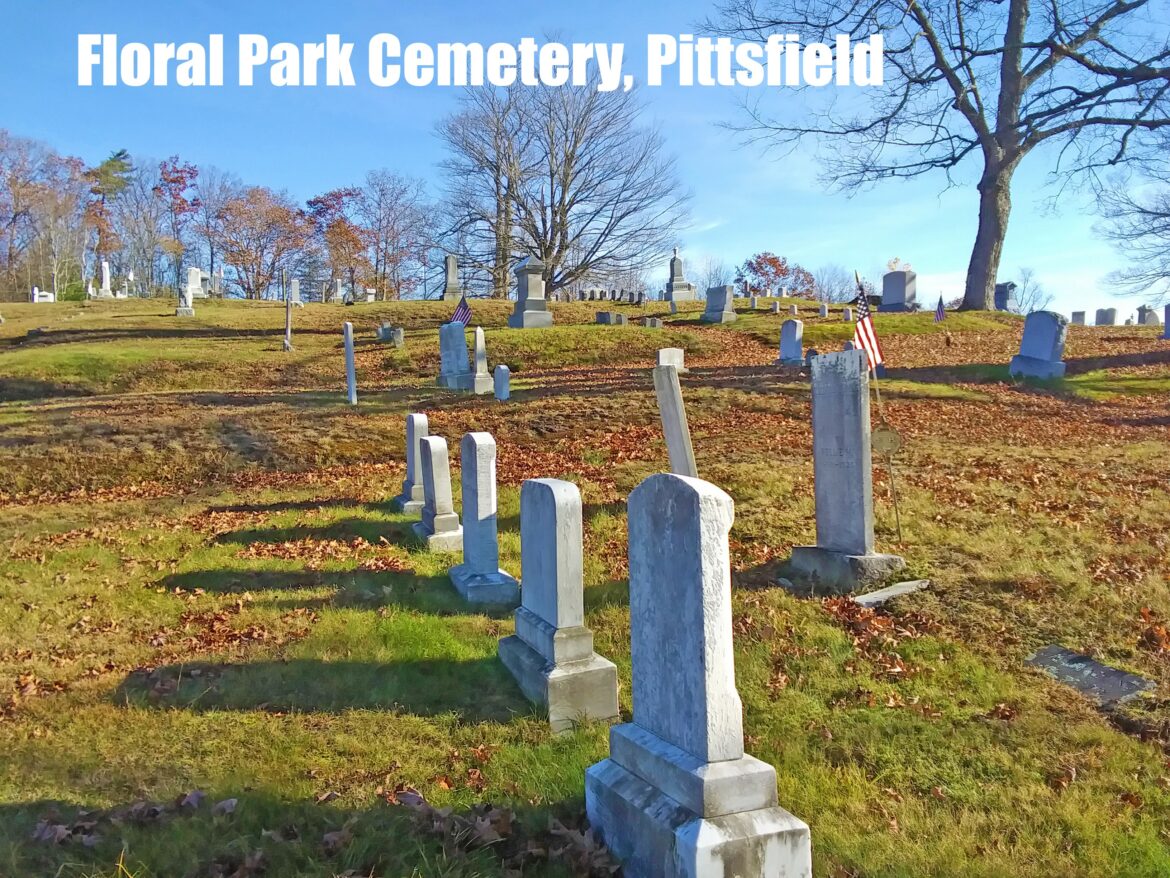 Floral Park Cemetery on Barnstead Road in Pittsfield. The cemetery contains a stone erected to honor the 30 men from Pittsfield killed during the Civil War. Just down the street is a memorial dedicated in 2004 to U.S. Air Force General Harrison R. Thyng, who retired to Pittsfield after a distinguished military career. Thyng was decorated for flying missions during World War II and the Korean Conflict. He won the Republican nomination for U.S. Senate in 1966 and lost the election to Democrat Thomas J. McIntyre. Thyng founded the New England Aeronautical Institute in 1965, which later merged with Daniel Webster Junior College to become Daniel Webster College in Nashua. He died in 1983 and is buried in Barnstead.

Peter M. Fahey, 75, of Hanover, died Nov. 26, 2022. On his college application years ago, he was asked to write 25 philosophical words to humanity. He responded, “You have but one life on this earth: do not waste it. Utilize every minute of your life to improve yourself and help your neighbor.” That is exactly how his family says he lived his life. A philanthropist, he was a former partner at Goldman Sachs and a trustee of Dartmouth College from 1994 to 2004. He received a degree in chemistry from Dartmouth College and engineering degrees from the Thayer School of Engineering. He began his career as a chemical engineer, then went to Harvard Business School, beginning his career on Wall Street at Goldman Sachs in corporate finance. He was named a general partner in 1983 and retired in 1993. Over three decades, he supported multiple facilities projects, endowed both undergraduate and graduate scholarships, and created an endowment for the athletics department at Dartmouth. In 2007, he received the Dartmouth Alumni Award, and in 2018, Dartmouth awarded him an honorary degree of Doctor of Humane Letters. (Rand-Wilson Funeral Home)

Kenneth J. Dugal, 70, of Litchfield, died Nov. 25, 2022. He was a public school music teacher for 42 years at Merrimack High School. He began playing piano professionally as a teenager and earned a bachelor’s and master’s degree in music education from UMass Lowell.  In 2009, he was awarded New Hampshire Music Educator of the Year. He held numerous executive board positions in the Merrimack Teachers Association and was a passionate supporter of arts education.  He had a keen interest in his French-Canadian roots and was a member of Club Richelieu, the Franco-American Centre of New Hampshire and numerous French conversation groups.  (Rivet Funeral Home)

Alan Gordon, known as “Smokey,” 80, of Concord, died Nov. 25, 2022. He worked for the state of New Hampshire in building maintenance for more than 45 years before retiring in 2006. He could often be seen riding his bike around Concord. His favorite pastime was volunteering for more than 20 years with the St. Paul’s Church Food Bank. (Bennett Funeral Home)

Timoleon N. “Lindy” Chakalos, 95, a lifelong resident of Keene, died Nov. 28, 2022. A star basketball player in high school, he was named MVP of the N.H. State Basketball Championship even though Keene High lost the championship game. A U.S. Navy veteran during World War II, he attended college and left early to take over the family restaurant for his father, who was in poor health. He later finished college, receiving a bachelor’s degree from Keene Teachers College. He opened Lindy’s Diner in Keene in 1960 and Timoleon’s Restaurant in 1985. He also managed the Ramada Inn hotel and operated a cafeteria at Keene State College. He was a member of the Bektash Shriners and a member of the Asteria Chapter No. 40 OES Masonic Temple (now Jerusalem Lodge No. 104) for more than 50 years. He was also a local chairman for the American Heart Association’s fund drive. He was a long-time member of St. George Greek Orthodox Church and past president. (Foley Funeral Home)

Fernande T. Lavoie, 93, of Nashua,  died Nov. 28, 2022. She was employed in the Nashua City Hall Tax Collector’s Office for 35 years. She volunteered her time at Holy Infant Jesus Church for bean suppers, Bingo, First Communion, and many other functions. She was also a eucharistic minister. (Rochette Funeral Home & Cremation Services)

Bryan Bartsch, 71, of Windham, died Nov. 28, 2022. A U.S. Navy veteran, he served for 30 years and was stationed overseas in Germany, England, Bahrain, and Diego Garcia. In the United States, he served in Connecticut, Rhode Island, Virginia, Maine and Maryland. His last duty station was the White House. (Carrier Family Funeral Home & Crematory)

Sumner Woodward, 92, of New London,  died Nov. 24, 2022. A U.S. Army veteran, he served as a first lieutenant with the 4th Infantry Division in Germany. In 1955, he joined his father running the family building business, Wesley B. Woodward and Son. Over a 45-year span, he built over 1,000 homes, many of them with partner Jim Moreland. They were named New Hampshire Builder of the Year in 1982. He was a deacon at the New London First Baptist Church, president and a lifetime director of the New London Outing Club, director of Sugar River Savings Bank and New London Trust Company, president of King Ridge, executive board member of Presidential Oaks, and an executive board member of the Boys Club. He also coached baseball for 50 years; was a Christian education teacher, served on building committees for the Tracy Memorial Library and Kearsarge Regional High School, was a board member for the Wilmot Community Center, member of the New London Historical Society, member of Heidelberg Lodge No. 92 IOOF, and oversaw the building of the Red Barn. In 1989, he and his wife went into partnership with Sheer and McCrystal, creating Whipple House, which is now Woodcrest Village, owned and operated by the Brenner family. Summer’s last building project was the development of Deerwood in Wilmot, where he lived for over a decade before returning to New London in 2017. He was awarded the Boys Club’s William Marbury Beall Award and together with his wife, Jo, received the Third-of-a-Century Award. (Chadwick Funeral and Cremation Service)

Dana A. French, 83, of Litchfield, died Nov. 25, 2022. A U.S. Coast Guard veteran, he was a union pipefitter and president of UA Local 131 Plumbers and Steamfitters for 17 years. He started his own successful company, Dana’s Piping Inc. He volunteered at Camp Fatima, where he gave his friends “the heat” and performed in skits, sang, and danced with developmentally challenged campers. (Connor-Healy Funeral Home and Cremation Center)

Malcolm S. Porder, 88, of Nashua, died Nov. 27, 2022. He was the owner of Su-Ann Mfg., Inc., a division of Porder Manufacturing, of Lowell, Mass. Su-Ann Mfg., made woman’s dresses and supplied Bon Marche, Cherry & Webb and other retailers. (Davis Funeral Home)

George Polychronopoulos, 94, of Dover, died Nov. 27, 2022. A U.S. Marine Corps veteran, he was a quality control manager for IMC Magnetic Corporation, Damart and GFS. He was involved in coaching Little League, adult softball league, local basketball and golfing at Sunningdale Country Club. He was a dedicated steward of the Annunciation Greek Orthodox Church where he was past president of the parish council. He was an active member of the AHEPA and received the Ministry Award from the diocese in 2005. (Tasker Funeral Service)

Louise J. LeCompte, 88, of Dover, died Nov. 25, 2022. She was valedictorian for Presentation of Mary in Hudson in 1952, and at age 51 she earned her bachelor’s degree from the College for Lifelong Learning and again graduated as valedictorian. She was an executive secretary in the Criminal Investigation Division of the IRS. She was a eucharistic minister, lector and Cursillista at The Parish of the Assumption in Dover. She ran the annual Mother’s Carnation Day sale for years. She also volunteered at Birthright in Portsmouth. (Tasker Funeral Service)

Bernard W. Chapman, 94, of Tilton, died Nov. 28, 2022. A postal worker for 37 years, he was a volunteer for the senior center as well as a Meals on Wheels driver. He worked for several local businesses including Bryant and Lawrence Hardware in Tilton.  He was a courier for Franklin Savings Bank, a bail commissioner, justice of the peace, supervisor of the checklist, and a rest area attendant. He was an active member of The Congregational Church in Laconia and was the innkeeper for the Christmas pageant. (Thibault-Neun Funeral Home)

James J. LeMahieu, 86, of Concord, died Nov. 25, 2022. He served for 12 years on the board of trustees at Pinkerton Academy in Derry beginning in 1980 and serving as vice president and then president until stepping down in 1991. He worked for more than 25 years at Gorton’s Seafoods of, Gloucester, Mass., moved to Texas, then returned to New Hampshire in 2012. (Peabody Funeral Homes and Crematorium)

Irene H. Jewett, 101, a lifelong resident of East Andover. died Nov. 27, 2022. She volunteered for many town functions and served on several organizations and  town committees. She was an EMT with the Andover Fire Department for several years and clerk of the Andover Congregational Church for 50 years.
She received the Vaughan Award for volunteer service, presented by the governor. She has held the Boston Post Cane as Andover’s oldest resident since 2021. (Smart Memorial Home)

Anne Dalrymple Krantz, 80, of Amherst, died Nov. 26, 2022. During nearly 40 years in Amherst, she volunteered with the Cub Scouts, Amherst Conservation Commission, Heritage Commission, Stormwater Committee, planning board, and the N.H. State Pesticide Control Board. She was active for decades with the Amherst Garden Club. She volunteered with the N.H. Cooperative Extension and also used her gardening skills to teach at the New Hampshire Correctional Facility for Women. She established the Dalrymple Community Engagement Fellowship at the Extension in 2005 to support graduate student engagement with New Hampshire communities. She also played in the Amherst Town Band, as well as bands in Hollis and the American Legion band in Nashua. She was honored at the town’s 4th of July Parade in 2021 as Amherst’s Citizen of the Year by the Amherst Lions Club. (Smith & Heald Funeral Home)

Hope Kelly, 85, of Milford, died Nov. 26, 2022. She was a kindergarten and first-grade teacher for 34 years. Early in her career, she taught at an army base in Bamberg, Germany, and retired from C.E.T. Elementary School in Croton, N.Y., where she taught for more than 25 years. She was a member of the Milford Garden Club, delivered Meals on Wheels and volunteered with SHARE in the Clothing Barn and Pantry Shelf. (Smith & Heald Funeral Home)

Lucien Gagne, 86, of Manchester, died Nov. 30, 2022. A N.H. Air National Guard veteran, he worked at Sanders Associates for 26 years, rising to director of the ocean technology group. He moved to Cleveland, Ohio, and became president and chief operating officer of Marine Mechanical Corp., retiring as chairman of the board of directors in the early 2000s. He was a lifetime member of IEEE and the Navy League. He served as a board member of West Side Regional School, Trinity High School, and the Diocesan School Board. He coached for Manchester Regional Youth Hockey Association (MRYHA) for 15 years and umpired for the West Side Little League. (Lambert Funeral Home & Crematory)