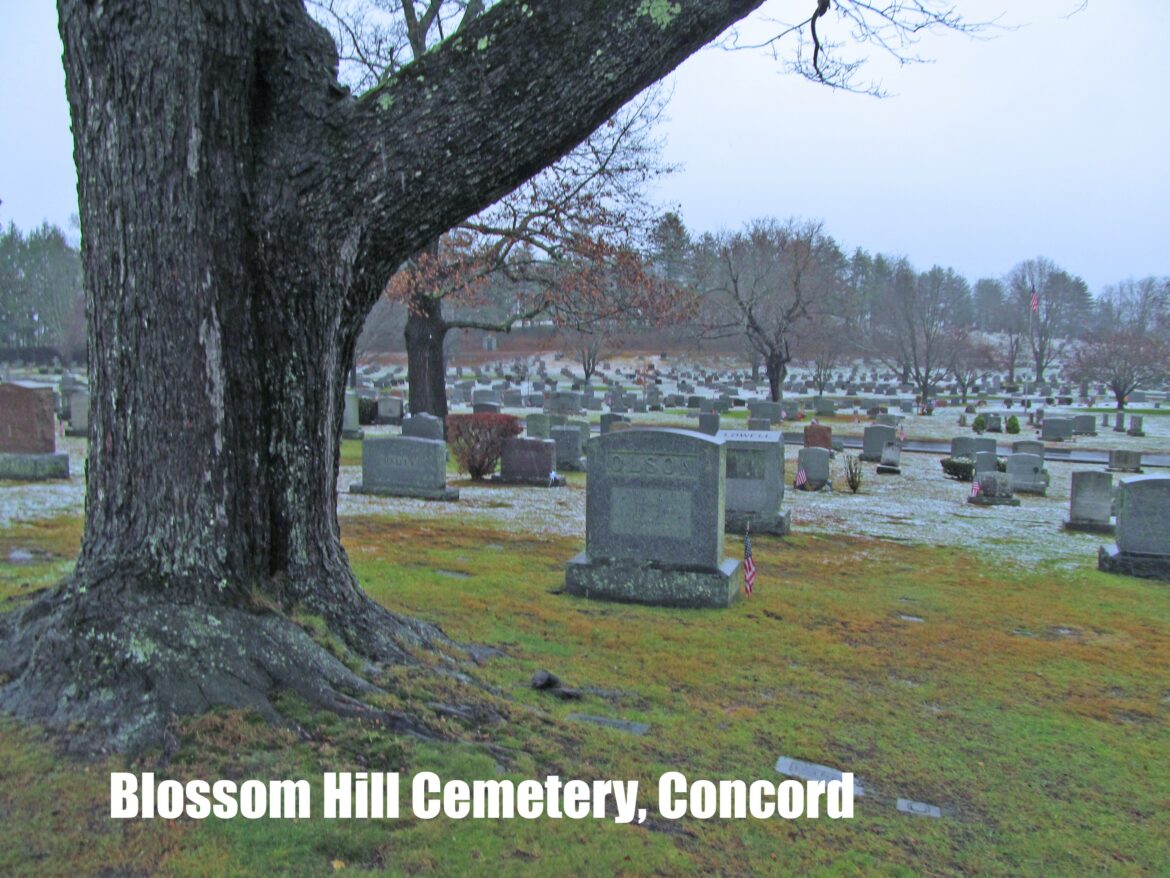 Concord’s Blossom Hill Cemetery, located on North Main Street, seen on the morning after a dusting of snow. Among those buried here are five U.S. senators, three governors, and three congressmen. Nearby Calvary Cemetery contains the burial site of teacher-in-space Christa McAuliffe, who died Jan. 28, 1986, aboard the space shuttle Challenger.

Raymond J. Wieczorek, 93, the 52nd mayor of Manchester, died Nov. 22, 2022. A U.S. Army veteran of the Korean Conflict, he was founder of Wieczorek Insurance Agency in Manchester in 1964. It was his public life where he was most well-known, serving for five terms from 1990 to 2000 as mayor of the Queen City, and during that time, he built an impressive list of accomplishments including the redevelopment of the Amoskeag Millyard, the development of the Manchester-Boston Regional Airport, and the creation of the downtown civic center, formerly known as the Verizon Wireless Arena and now the SNHU Arena. He went on to serve as an Executive Councilor, representing the 4th District, for six terms, from 2002 to 2012, and Gov. Chris Sununu, issued a statement saying, “As Mayor of Manchester and as an Executive Councilor, Ray took the time to listen and connect with his constituents one on one. He leaves behind a legacy that will inspire many for decades to come. But most importantly, Ray was my friend.” Prior to Wieczorek’s election to office, he volunteered for many Manchester area nonprofits, including as director and president of the Manchester Scholarship Foundation between 1973 and 1976; commissioner of the Manchester Housing and Redevelopment Authority in 1984, and serving as its chairman from 1986 to 1989. Because of his efforts at rebuilding the airport, the access road to the Manchester–Boston Regional Airport was named Raymond Wieczorek Drive. (Lambert Funeral Home)

Onorato “Ono” Brandi Jr., 52, of Bethlehem, died Nov. 19, 2022. A native of Connecticut, he was a founding member and bass player for the rock band The Village, which played the Connecticut area during the nineties. His bandmate, Chris Beardsley, wrote on his website that The Village developed a strong following in New Haven, Bristol and Hartford. During the seven years they were together, they played gigs from Maine to Florida.  The Village played venues such as Toad’s Place in New Haven, The Bitter End in New York City and Nectar’s in Burlington, Vt., and produced two full-length CDs and one four-song EP.  The first CD was titled “Lost in the Shuffle” featuring their most popular song, “House on Wheels.” They disbanded in 1997, and Ono worked in the insurance industry and as a small business owner. (Bailey Funeral Home)

Susan Jane Bonagura, 84, of Fremont, died Nov. 18, 2022. A native of Australia, she was an administrative assistant at the American Consulate General is Sydney. She came to the United States in 1962 and worked as an assistant to the information officer at the Australian Consulate General in San Francisco,  later in Washington, D.C., as a secretary to the Wing Commander at the Office of the Australian Air Attaché, Australian Embassy. Her family moved to Fremont in 1975 and she was the assistant director for the Rockingham County Nutrition Program and Meals on Wheels, and the director of the Rockingham Friendly Callers program. She managed the Vic Geary Drop-In Center and Meals on Wheels, later serving as welfare officer for the town of Fremont. (Brewitt Funeral Home)

David A. Patterson, 73, of New Ipswich and formerly of Townsend, Mass., died Nov. 17, 2022. He had his Bachelor of Science from Boston State College and Master of Science Education from Fitchburg State College. He enjoyed a 34-year career as a high school biology teacher in Billerica, Mass. He authored the popular guidebook “Freshwater Fish of the Northeast” in which his son contributed the illustrations. The father-son team describe and illustrate more than 60 fish species, from the well known to the obscure. (Cournoyer Funeral Home and Cremation Center)

Ian J.H. Clarke-Pounder, 93, of Nashua, died Nov. 18, 2022. A native of Leeds, England, he was an engineer who worked during World War II assembling and testing submarine and locomotive diesel engines, and later as a draftsman designer in the drawing office. He was drafted in the war in 1945 at age 16, and afterwards he served two years in the Royal Air Force as a junior technician and acting corporal. He came to Quebec to work as a research engineer for Ingersoll-Rand designing machines for the pulp and paper and mining industries. He settled in Nashua in 1973 and became vice president at Ingersoll Rand. He held 17 patents. In Nashua, he was involved with the Main St. United Methodist Church of Nashua, serving as lay member to the Annual Conference, Bible class leader and various committees. He was a member of several professional associations and volunteered with the Boy Scouts and was a past member of the Nashua Country Club, Nashua Chamber of Commerce, and a current member of Rotary Club of Nashua and winter member of Seminole Lakes, Fla., Rotary Club. (Davis Funeral Home)

Timothy William Sullivan, 59, of Derry, died Nov. 19, 2022. He played for Amoskeag Rugby Club for over a decade and served as team captain for two seasons. He spent nearly  his entire professional career — 30 years – teaching troubled youth at the John H. Sununu Youth Services Center. He led the youth rugby team and built a maple sugar program from the ground up. (Dumont-Sullivan Funeral Home)

Diane Ellen Chen, 63, of Durham, died Nov. 18, 2022. She worked as an accountant in Boston and moved to Durham in 2014. She was a member of the Durham town council. She was an artist and musician. (Kent & Pelczar Funeral Home & Crematory)

Mary K. Clark, 94, of Hampstead, died Nov. 17, 2022. She served in the U.S. Navy as a member of the WAVES during the Korean Conflict. She was the first appointed female police officer for the town of Hampstead and served for 13 years. She also served as a Hampstead ballot clerk. (Peabody Funeral Homes & Crematorium)

David E. Iverson, 62, of Tilton, died Nov. 17, 2022.  He was well known in the Lakes Region for the many businesses he ran with his wife, Karen, from Helbent Custom Fabricators to Busted N Hurtin Enterprise or Absolute Portable Toilets. (Smart Memorial Home)

Joanne Elizabeth (Krupski) Mitchell, 89, of Somersworth and formerly of Pittsburg and Wolfeboro, died Nov. 18, 2022. She graduated from the Bay State Academy and worked for Pan American World Airways in Boston, then General Electric in Lynn, Mass., in the fifties. She taught CCD, chaperoned her children’s field trips, ran bake or book sales, and helped at school in the lunch room while in Wolfeboro. She was the head of the Catholic Women’s Club at St. Cecilia’s in Wolfeboro.  She and her husband moved to Pittsburg in 1990 and worked in the special care unit at the Coos County Nursing Hospital for 13 years. She was a member of Aurora Grange No. 235. (R.M. Edgerly & Son Funeral Home)

Richard F. Purtell, 71, of Pelham and  formerly of Lowell, Mass., died Nov. 19, 2022. He was the former owner and operator of American Resources Staffing in Bedford. He was also a founding member of TSE, The Staffing Exchange, and was a consultant for Wicked Staffing Solutions until his retirement. He was a member of Manchester Country Club and the Veranda Club in Ft. Myer’s, Fla. (Pelham Funeral Home)