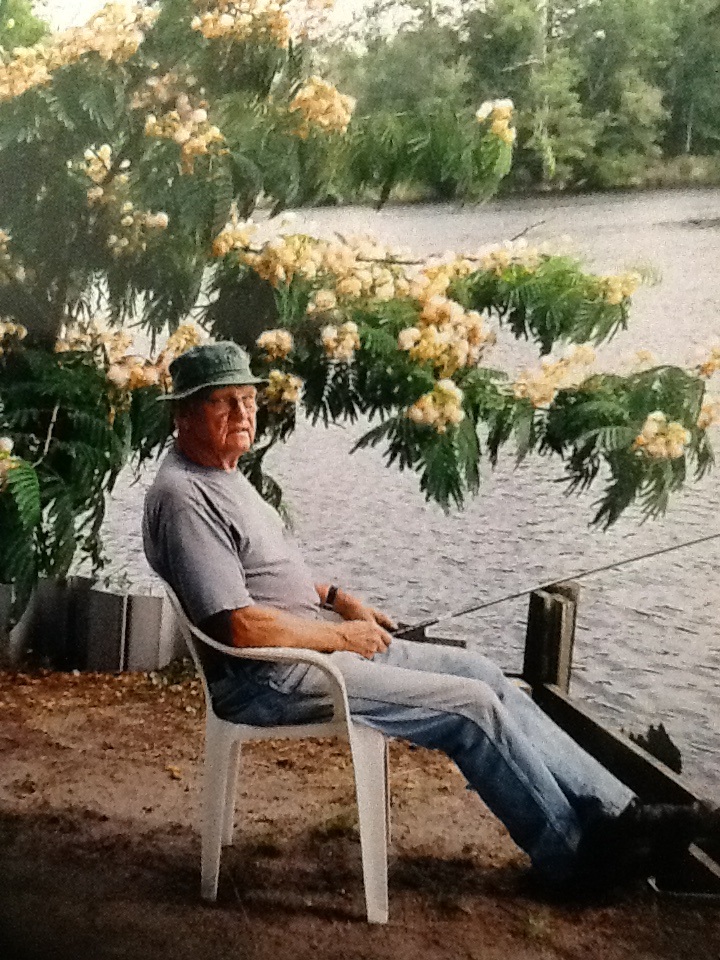 Gunnery Sergeant George A. Liset, USMC Retired, recently passed away. We salute you, sir, and thank you for your dedicated service.

WRITING ON THE FLY
By George LIset

” I had different ways of occupying myself while I lay awake. I would think of a trout stream I had fished along when I was a boy and fish its whole length very carefully in my mind.” — Ernest Hemingway

Ernest Hemingway knew the healing power of water, and so did my dad who fished his beloved Neuse River. My father was a career U.S. Marine. My dad was in the occupation of Japan, the Korean War, the Bay of Pigs and Viet Nam twice. He was injured a number of times and said that he should have earned three Purple Hearts. That was when Lieutenant General Chesty Puller was in charge, and he didn’t award many.

My dad experienced and saw many things that you can’t unsee. I am sure he spent many sleepless nights trying to unsee. Then there is what I call “The Unwritten Code.” The code says that you don’t share your experiences unless it is with someone who was there or another Marine. That is just the way it is. Some veterans come home with obvious injuries, and others not so obvious.

One early Fall day I was fly fishing the Merrymeeting River in Alton. I drove by the Alton Public works building and yard and parked on the upper trail by the dam and walked in a little way. I came upon a young lady fishing. Always looking for new material to write about, I approached from down stream so she could see me in her peripheral vision and shuffled my boots to alert her of my presence..

She turned and greeted me and I asked her how the fishing was going. We struck up a nice conversation. She mentioned that she was in the U.S. Army and living in Colorado and was visiting her family in Strafford. We talked about the fishing in Colorado and both agreed that we had to work a little harder for our fish in New Hampshire.

Then came a loud crash, which turned out to be the dump body of a DPW truck slamming against the frame unloading boulders. When I turned back to talk with my new friend, I didn’t immediately see her. Then I looked on the ground and there she was, crouching, with both her hands over her ears and  quivering like so many leaves on a birch tree in a Northeaster. She didn’t even drop her pole.

I was about to ask her if there was anything I could do, when her father came running up the path to comfort her. A few minutes later after she was settled, we exchanged goodbyes and she went down the river. Her dad stayed and thanked me for taking time to talk with his daughter. He then explained that she had been deployed to Afghanistan where her armored vehicle hit a mine and was blown up.

My heart sank. This was someone’s daughter who was struggling  with the thing you can’t unsee. He explained that she is getting help with her injuries and that fishing with dad is the best medicine. I write this to all the men and women who have served and who have come home with things they can not unsee. There is help. Project Healing Waters (project healing waters.org) is a veterans organization that teaches veterans to fly fish, and I am sure they are good listeners.

Any active Trout Unlimited group usually has a number of veterans who would be willing to help other veterans learn to fly fish. Standing in water with a fly rod in your hand can be therapeutic, but catching fish is even more so. Thank you to all the veterans out there and Happy Marine Corps Birthday to my nephew Michael.