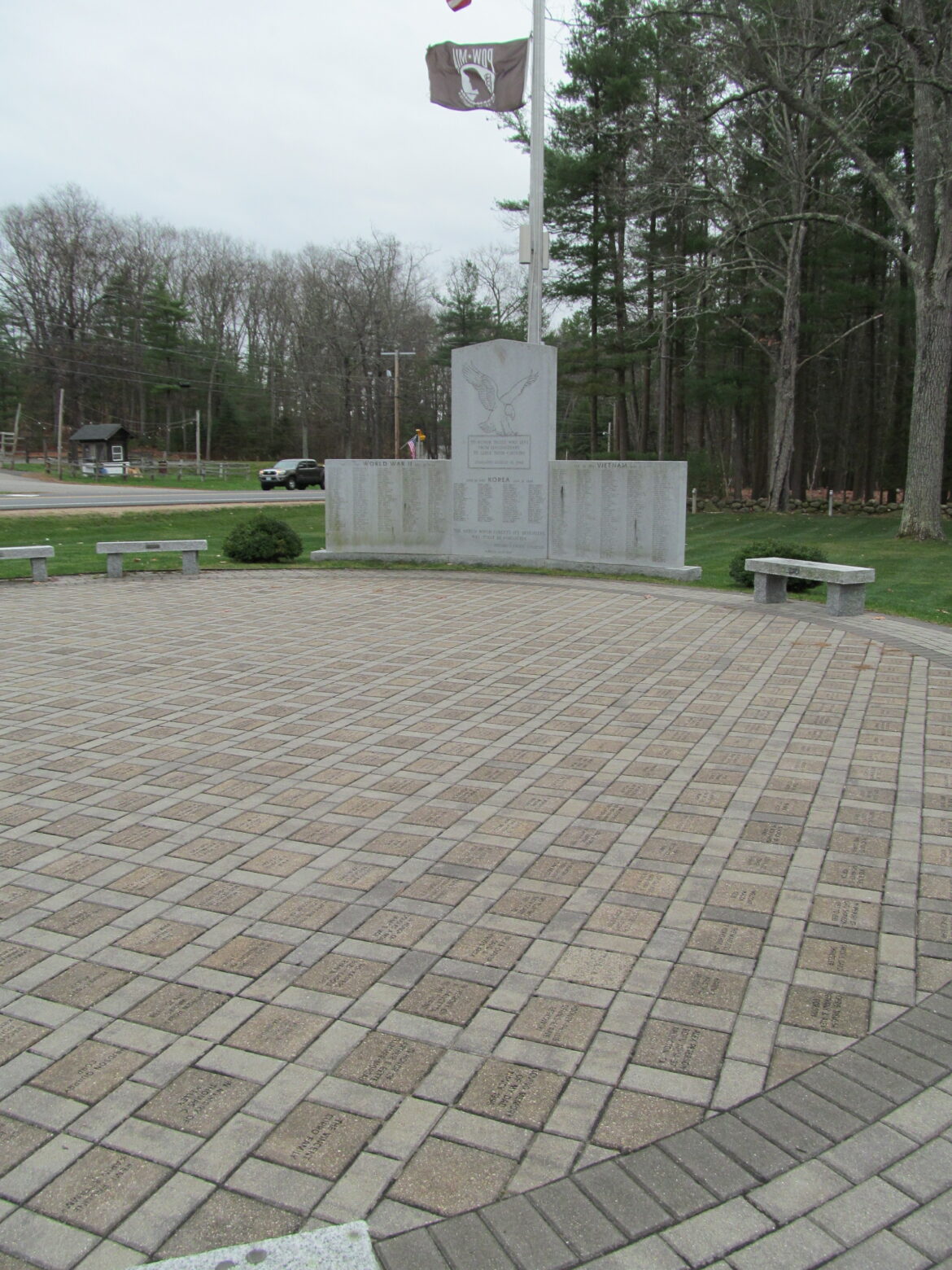 The war memorials erected in 1998 to honor those from Londonderry who fought in three wars: World War II, Korea, and Vietnam. This memorial as well as ones dedicated to those from Londonderry who fought in World War I, the Civil War and the Revolutionary War, as well as one dedicated to the victims of 911, are located in the Londonderry Town Common at the intersection of Mammoth and Pillsbury roads. The inscription at the bottom of the center stone reads “A nation which forgets its defenders will itself be forgotten.”

Lincoln Soldati, 73, the former Strafford County Attorney and former mayor of Somersworth, died Nov. 6, 2022. He served nine terms as Strafford County Attorney and established Strafford County’s first Victim Assistance Program. He was awarded the Dr. Roger M. Fossum Award “in recognition of his outstanding dedication and service to New Hampshire’s Children and Families.” He was the only prosecutor to testify for the repeal of New Hampshire’s death penalty. He served eight years on the Somersworth School Board, and in 2009 was elected mayor of Somersworth. In 2016, he traveled to  Palestine to mentor young public defenders, and later that year, he drove to Standing Rock to help the Sioux Nation fight for its water rights in North Dakota. He became an Uber driver in 2017, then was a candidate for U.S. Congress in the primary in the First District. (See obituary elsewhere on this website)

John J. (Jake) Crouthamel, 84, of Hanover, died Nov. 7, 2022. A U.S. Navy veteran, he had a career spanning four decades as a football coach and intercollegiate athletics administrator. An outstanding football player at Dartmouth College, he returned home from the Navy and spent six years (1965-70) as a member of Coach Bob Blackman’s staff at Dartmouth, a period that included four Ivy League championships, two undefeated seasons (1965, 1970) when Dartmouth also won the Lambert Trophy as the outstanding team in the East. Crouthamel was named Blackman’s successor in 1971, and his teams compiled a record of 41-20-2 and won or shared three Ivy League championships (1971-72-73). After leading the Big Green to an unprecedented fifth straight Ivy title in 1973 (including two under Blackman in 1969 and 1970 when Crouthamel was the senior assistant and coached the defensive backfield), he was recognized as the New England and NCAA District One coach-of-the-year. He left coaching after the 1977 season. From 1978 until he retired in 2005, he was the director of athletics at Syracuse University. He was instrumental in the creation of the Big East Conference in 1979. During his tenure, Syracuse athletics enjoyed unprecedented success: a national title in men’s basketball, nine national titles in men’s lacrosse, 14 football bowl appearances, and 22 overall Big East Conference championships.
Crouthamel, a history major, graduated from Dartmouth in 1960 and was selected by the Los Angeles Chargers in the first American Football League draft but signed with the Dallas Cowboys, an NFL expansion team. The last player cut in pre-season by the Cowboys, he then played with the AFL’s Boston Patriots during their inaugural season. (Rand-Wilson Funeral Home)

John Harvell Moody, 78, of Derry, died Nov. 6, 2022. He was formerly superintendent of schools in Derry.  A U.S. Air Force veteran, he began his career in education as an elementary teacher at Cutler School in Swanzey, in 1975 becoming a teaching principal in Westmoreland, followed by a principalship in Marlborough. In 1981 he joined the Salem school district as principal of Woodbury School and later assistant superintendent of schools. In 2002 he became superintendent of schools in Derry. In retirement, he filled an interim vacancy as Derry town administrator, became program director of educational administrator programs at Rivier University and served as interim superintendent of schools for the Hollis-Brookline School Districts. He served as the alumni trustee for Keene State College on the University System of New Hampshire Board of Trustees; Keene State College Alumni Board of Directors; president of Nutfield Senior Center Corporation; N.H. Association of School Principals; N.H. Association of School Administrators; N.H. Public Television Board of Directors; Primex Board; United Way of Merrimack Valley; and grants committee chair of the Alexander Eastman Foundation. His great love was being a member of the Derry Village Rotary. (Peabody Funeral Homes)

Carol Rudman, 86, formerly of Nashua, died Nov. 8, 2022, in Washington D.C. She was the sister of the late U.S. Sen. Warren Rudman. In her early career, she worked as the personal assistant to syndicated cartoonist Al Capp. She also taught French at Lincoln-Sudbury Regional High School in Sudbury, Mass. She had a 50-plus year career with the State Department, serving overseas in the U.S. embassies in Paris and Brussels before finishing her career at the Department of Commerce in Washington, D.C. She was an accomplished flautist and was also a member of the National Press Club. (Davis Funeral Home)

Clifford James Young Jr., 85, of Northwood, died Nov. 3, 2022. A U.S. Air Force veteran, he served for 34 years, in Korea, Vietnam and elsewhere, retiring as a technical sergeant. He was a custodian in his later years at Coe Brown Northwood Academy and Nottingham Elementary School. (McHugh Funeral Home)

Paul Norman LeBlanc, 75, of Nashua, died Nov. 4, 2022. A U.S. Marine Corps veteran, he attained the rank of staff sergeant and served in Vietnam. He worked for Producer’s Dairy while attending college earning a bachelor’s degree in business. He was employed by Sanders Associates and British Aerospace Engineering, retiring as a project manager. (Zis-Sweeney and St. Laurent Funeral Home)

Mary L. St. Gelais, 95, of Boscawen and formerly of Gilford, died Nov. 5, 2022. She worked for many years as a dietary aide for Laconia High School, McKerley’s Nursing Home (now Genesis Health Care) and the St. Francis Home. She was a self-taught artist whose paintings may be found in many homes and at Concord Hospital – Laconia. She volunteered at the hospital, making dolls to comfort patients and knitting baby hats for the nursery. (Wilkinson-Beane-Simoneau-Paquette Funeral Home & Cremation Services)

Cecile G. Connor, 92, formerly of Franklin, died Nov. 6, 2022. She was a school secretary for 19 years at Winnisquam Regional Middle School.  She was known for her gingerbread men cookies that she would make at Christmas, her favorite holiday.  She moved to Maine in 1998.  (Thibault-Neun Funeral Home)

Barbara Sargent Morrill, 86, of Franklin, died Nov. 5, 2022. She worked for the State of New Hampshire and Blue Cross/Blue Shield of New Hampshire. She was a member of Eastern Star and held many offices in the organization, including Worthy Matron. She and her husband traveled to Eastern Star and Masonic gatherings throughout the state. (Thibault-Neun Funeral Home)

Charles Perley “Butch” Peabody, 85, of Somersworth, died Nov. 4, 2022. A U.S. Marine Corps veteran, he served in the Vietnam war. He also served in the N.H. National Guard, was a member of Dover Police and worked for Davidson Rubber, Rochester Bank, Joe’s Store, and Shop & Save. (Tasker Funeral Service)

Verna J. “Dode” Boudreau, 86, of Dover and  formerly of Stoneham, Mass., died Nov. 4, 2022. She was a secretary in the Stoneham Public Schools and after retiring enrolled in the University of New Hampshire to fulfill a lifelong dream of becoming a college graduate. She graduated in 2015 with her bachelor’s degree in English. She served on the First Parish Congregational Church craft and historical committees. (Tasker Funeral Service)

Donald Edward Morrisette Sr., 83, of Exeter died Nov. 5, 2022. A U.S. Army veteran, he was an Exeter volunteer firefighter, serving for 40 years and retiring as a captain.  He was a brick and stone mason and took over the family business.  He was a member of the Exeter Lions Club. (Stockbridge Funeral Home)

Charles R. (Dick) Murdoch, 84, of Hampton and formerly of Beverly and Reading, Mass., died Nov. 5, 2022. He taught at Robin Hood Elementary, Central and Stoneham Middle School in Stoneham, Mass., from 1966-2000. He volunteered for many organizations from the Parks and Recreation Department in Stoneham to coaching JV and Varsity baseball in Reading. He served as the Boosters club president, volunteered at Portsmouth Regional Hospital and coached his three sons in several sports. (Remick & Gendron Funeral Home-Crematory)

Ernest J. Cote Jr., 87, of Hampton, died Nov. 3, 2022. A veteran of the U.S. Army National Guard and the Air Force Reserves, he was a civil engineer for Camp Dresser and McKee in Boston and later served as superintendent for the Andover water treatment plant in Andover, Mass. He was manager for the Hampton Water Company succeeded by Aquarion Water Company for 20 years. He was the owner of E.J. Cote & Associates Inc., specializing in land surveying and flood insurance from 1996-2016, retiring at the age of 82. (Remick & Gendron Funeral Home-Crematory)

Cecile T. (DesRuisseaux) Dupuis, 92, of Manchester, died Nov. 5, 2022.  She was a member of the Catholic Medical Center Board of Incorporators and president of the CMC Associates.  She was also a member of Les Dames de St. Anne and Catholic War Veterans. She taught CCD at St. Jean the Baptist  Church and volunteered with the Caregivers. (Lambert Funeral Home and Crematory)

Margaret Mary (Sullivan) Parodi, 97, of Brookline, died Nov. 5, 2022. She was a WAVE during World War II and a longtime resident of Derry, where she and her husband owned Broadway Pizza. She lived in Auburn, the Bishop Primeau Apartments in Manchester, and Brookline. (Lambert Funeral Home and Crematory)

Doris L. Houle, 83, of Nashua, died Nov. 8, 2022. She and her husband owned and operated Mr. Robert Hair Styling on Main Street in Nashua. She was a parishioner of St. Christopher Church and spent many hours volunteering with them. (Rochette Funeral Home and Cremation Services)

Donald H. Pomeroy, 85, of Goffstown, died Nov. 7, 2022. He was an electrical engineer at IBM for 30 years and had also taught at Manchester Community College.  He served on the Manchester Zoning Board for several years. (Lambert Funeral Home & Crematory)

Martha Flint Swain, 87, of Newport, died Nov. 9, 2022. After spending her first teaching year in Connecticut, she returned to Newport, where she spent the next 37 years teaching mostly fourth grade at Richards and Towle Elementary Schools. (Newton-Bartlett Funeral Home)

David W. Laughton, 73, of New Durham, died Nov. 6, 2022. He was elected shop steward with the Teamsters union and rose through the ranks to become the leader of all of New England including chairing the pension fund of New England and the conference director of the Brewery and Soft Drink division. He started a scholarship fund for the Dover Housing Authority over 20 years ago. The scholarship fund has helped many people from the projects to start a better path in life. (Wiggin-Purdy-McCooey-Dion Funeral Home)

Lorraine H. Vangjel Warfield, 92, of Laconia, died Nov. 9, 2022. She was employed by the N.H. Superior Court system as administrative assistant to five chief justices over 23 years. She was a member of Secretaries International and served as past president of VFW Post 1670 Auxiliary in Laconia. After retiring, Lorraine volunteered in the records department at Belknap County Home for two years. She also volunteered at the admissions desk at Ledgeview and served as secretary to the Executive Committee and Resident Association Committee of Taylor Community for two years. (Wilkinson-Beane-Simoneau-Paquette Funeral Home & Cremation Services)