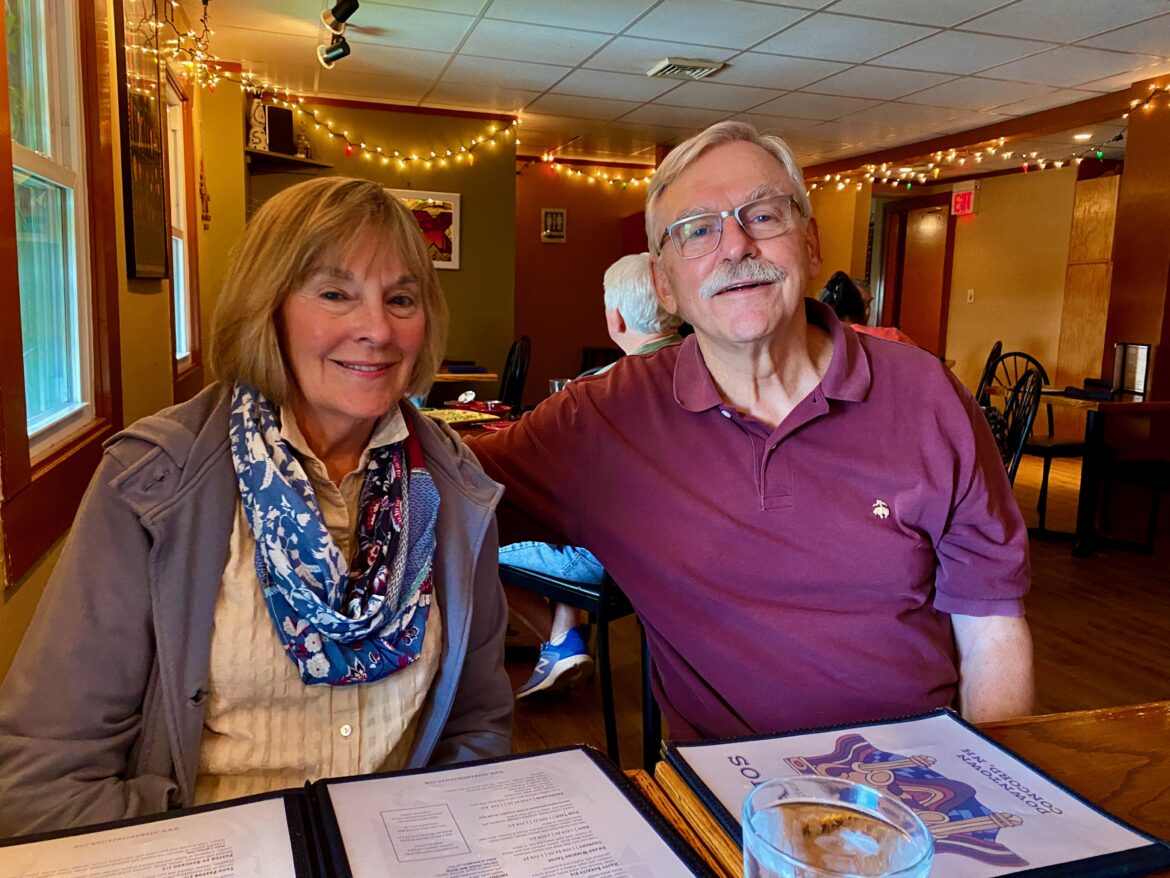 By Chris and Gary Burton, Meredith

Although we have never felt the need to share our political views in a public forum, we have decided it’s time to speak up.  We weren’t always liberal, and we weren’t always Democrats, but we surely are now!  We have been deeply troubled by the political discourse of the last several years, the insurrection of January 6th, the disinformation that flies around social media and elsewhere, and the wild conspiracy theories that attempt to blame government and more specifically, Democrats for all that ails this country.  We hope our letter will encourage others who may have been sitting on the sidelines and saying little to speak up and most importantly, vote.

We do not support the recent decision of the Supreme Court regarding Roe v. Wade and Governor Sununu’s and the NH Legislature’s efforts to remove reproductive freedoms.  While we are not proponents of abortion, we believe that women, their families, and their doctors are in the best position to make such personal decisions without the interference of government.  Our personal belief system should not dictate others’ reproductive options.

We are the products of public schools; our children graduated from Inter-Lakes High School, and our grandchildren attend public schools.  We are staunch supporters of a free and appropriate education and local control; schools should not be political battlegrounds where books are banned and topics forbidden.   For sixteen years, our children reaped the benefits that the tax-payers of Meredith provided and for the twenty-seven years since their graduation, we have gladly paid our taxes to educate our community’s children.  We will continue to do so as we believe that public schools are key to providing our state and country with an educated populace.  That said, every parent has a right to send their child to the school of their choice.  We do not support the NH Legislature’s Educational Voucher Program (Education Freedom Accounts) whereby tax dollars are now supporting private and religious schools.

We believe in science and we believe that climate change is a true threat to the planet.  We support President Biden’s initiatives to move our nation toward greater use of renewable energy sources.   About a year ago, we installed a solar system at our home and feel we’re investing in a small way in the earth’s health and our grandchildren’s future.

We support increased gun control.  We are not against gun ownership, but who other than the military and perhaps law enforcement needs an assault weapon?  If you’re a devotee of hunting or target shooting, great!  If you need an assault weapon to shoot your deer, perhaps you shouldn’t be out in the woods hunting.  As are many citizens, we’re sickened by the frequency of mass shootings in our country.   Does this reality demonstrate a need for increased mental health resources?  Absolutely!

We fully realize that some will read this piece and label us left-wing nutcases, socialists, or in Marco Rubio’s words, laptop liberals, Marxist misfits or crazies.  We do believe there should be a more equitable system of taxation, that the ultra-rich should contribute a larger portion of their income to the common good, and that tax loopholes which allow the very rich to avoid paying taxes should be closed.  Under the Republican tax bill of 2017, fifteen percent of the benefits went to people making under $75,000 a year; 85 percent went to people making over $75,000 a year and almost half went to people making over $250,000 a year.  That just seems wrong to us.  We also believe that all citizens of this country should be able to obtain health care.

We watched the aftermath of the election of 2020, in particular the insurrection of January 6th, in disbelief.  We listened to President Trump’s words at the rally on that morning as he pressured his vice president to do the unlawful and as he urged his supporters to march to the Capitol.  For those who tuned in to the hearings of the Select Committee to Investigate the January 6th Attack on the US Capitol, it was abundantly clear from the sworn testimony of Republicans who had supported and worked with former President Trump that he knew he had lost the election to President Biden.  Never in the history of this country has a defeated president refused to concede.  While the initial reactions of Senate Leader, Mitch McConnell and House Minority Leader, Kevin McCarthy were to chastise Mr. Trump, they have fallen in line.

In past years, we have sometimes voted for Republicans, typically candidates many would describe as moderates.  We have observed recent actions of the Republican dominated NH legislature, Governor Sununu, and the Belknap County Delegation with displeasure and have committed to vote a straight Democratic ticket for the foreseeable future; should the day come that Republican candidates take back their party from free staters and ultra-conservatives who are comfortable supporting insurrection, we may reconsider our position.

Who are we?  Two retired 70+ year-olds, married for fifty-two years, and long-time residents of Meredith.  We are parents, grandparents, members of St. Charles Catholic Church.  We love this state and country and feel blessed to live here, but we’re troubled by recent events and the tenor of public discourse.

Gary and his family immigrated from Canada when he was a year old.  His parents were born and raised in Newfoundland when the province was an independent British dominion.  When they were growing up, public education did not exist in Newfoundland.  His mother didn’t complete third grade, and his father had to drop out in tenth grade as neither family had the means to pay for their children’s schooling.  They had three sons; the first was born in Newfoundland, Gary was born in Toronto, and the third was born in the United States.  They came to this country, as have so many, to provide their children a better life, and most importantly, an education.  Gary became a naturalized citizen at age 17.  He is a former boys’ summer camp director, teacher, Principal and subsequently Director of the American-Nicaraguan School, Superintendent of Schools for SAU #2 (Inter-Lakes and Ashland districts) for 15 years, and Superintendent of Schools in Wayland MA for 17 years.  In 1992 he was honored to be named New Hampshire’s Superintendent of the Year.  Currently, he is a member of the local Rotary Club.

Chris was born and raised in New Hampshire, and her ties to the state run deep.  Her great, great-grandfather served in the 12th regiment of the NH Volunteers during the Civil War.  Chris’s mother immigrated to the US following WWII, having met her husband-to-be in England while he served in the US Army Air Corps.  Together they had three daughters.  She met Gary at 18 while waitressing at Johnson’s Dairy Bar in Northwood.  Chris earned degrees from the University of New Hampshire and Plymouth State University.  She is a former occupational therapist, teacher, girl scout leader, outreach counselor, and guidance counselor.  She is a current volunteer at Golden View Health Care Center and is on the Board of the Inter-Lakes Scholarship Foundation.

In November we’ll be casting our votes for Tom Sherman (Governor), Maggie Hassan (US Senator), Chris Pappas (US Representative), Matt Coker, Sandra Mucci (NH Representatives), Kate Miller (NH Senate), and Dana Hilliard (Executive Council), and we urge readers to join us.  We believe these candidates’ values and priorities align with ours and that they will work to make New Hampshire an even better state for all.