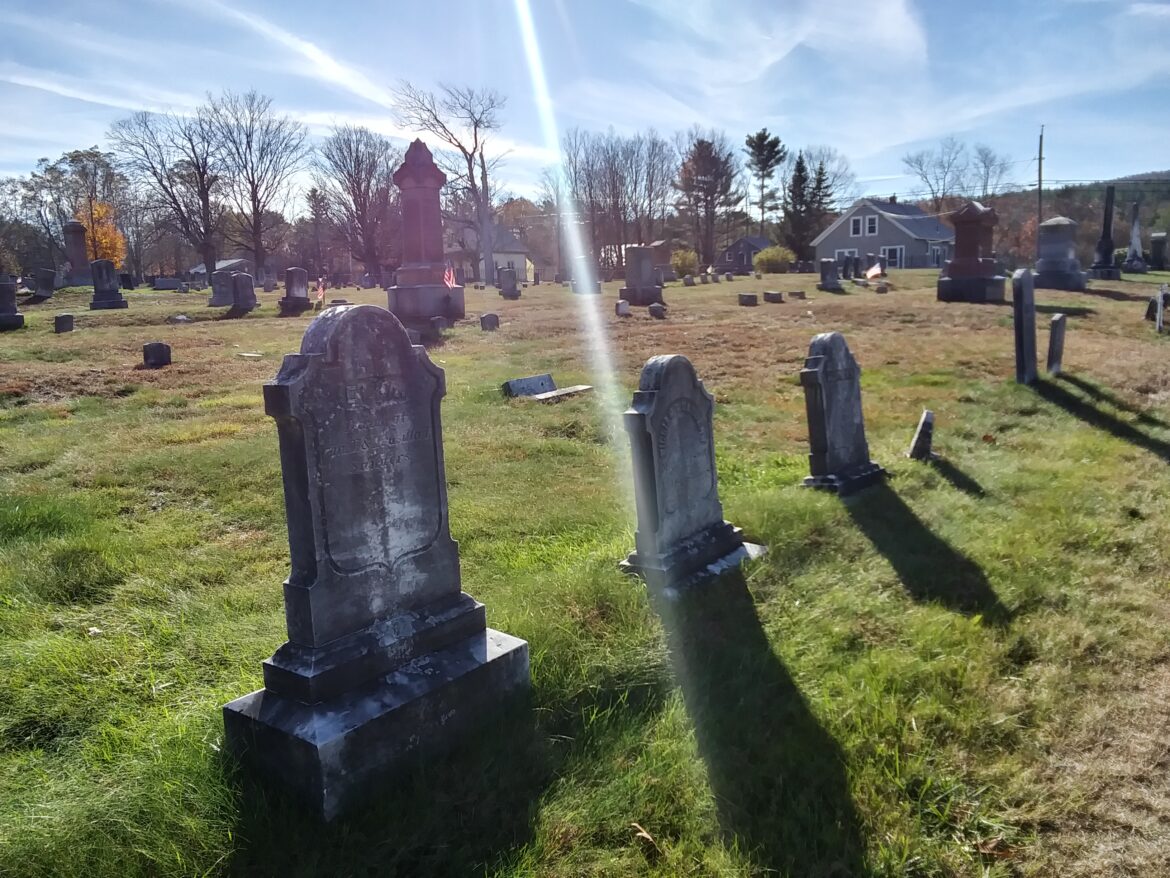 The noon sun shines down on a row of gravestones in the McClary Cemetery, Center Hill Road, Epsom. The cemetery is one of 44 listed by the town on the Epsom historical site and was named for Revolutionary War hero Major Andrew McClary, who was killed at the Battle of Bunker Hill by a random cannonball shot from an English frigate during his retreat. He was buried in Medford, Mass.

Frederick D. Hunt, 87, of Epping, died Nov. 1, 2022. He served for 13 years in the U.S. Naval Reserve. Moving to Epping in 1975, he worked at the former Almy’s department stores, in Boston and Methuen, rising from stock boy to manager/buyer over a 35-year career. He later worked for 17 years at the Lamprey River Elementary School in Raymond. He was a life member of the Salem Elks Lodge and was involved years ago with the Epping Little League association. (Brewitt Funeral Home)

J. William Hornby, 86, of Atkinson, died Nov. 1, 2022. He was a textile engineer and worked at Malden Mills/Polartec for 39 years, employed as process superintendent and engineer, technical and maintenance manager, and in product development, where he helped invent and develop Polartec products. He was plant manager at the Bridgton Knitting Mill in Bridgton, Maine, and he traveled regularly to Germany, where he helped develop a fleece knitting mill.  He created and planned an annual Malden Mills reunion, and while living in Lawrence, Mass., was a longtime member and former president of the Lawrence Zoning Board of Appeals. He was active in youth sports in Lawrence, serving as a coach for SLW Little League, the JCC Basketball League, and the Sacred Heart Parish Basketball Program. After moving to Atkinson, he was for many years president of the Atkinson Woods Condo Association. (Carrier Family Funeral Home and Crematory)

Luke M. Mroz, 41, of Salem, died Oct. 29, 2022. A freelance software developer, he volunteered for multiple political campaigns, which transitioned to his work as the deputy operations director and legislative aide for Rand Paul, and eventually his own campaign for New Hampshire House of Representatives. (Carrier Family Funeral Home and Crematory)

Dolores A. (Clark) Hansen, 89, of Newbury, died Oct. 28, 2022. A native of Park Ridge, N.J., she worked in New York City and moved to Bradford in 1961. She was the librarian at the Brown Memorial Library in Bradford for 13 years and was also a waitress at The Candlelight Inn. Her husband’s job promotion in 1982 brought them to Marshfield, Vt., and upon his retirement in 1993, they moved to Newbury.  She was a member of The First Baptist Church of Bradford and former clerk. She taught Sunday School and was the superintendent of Sunday School for many years.  She and her husband oversaw the Food Bank at the church for 14 years.  An accomplished seamstress, she made her children’s and  grandchildren’s clothes, and in her later years, she knitted hats for veterans. She also helped do recounts for the Secretary of State’s Office. (Chadwick Funeral & Cremation Service)

Barbara Ann Kristl, 90, of New London, died Oct. 28, 2022. She was known for her artistic, seamstress and decorating talents. Her touch could be seen on the holiday wreaths hanging throughout town. She also sewed the colorful aprons worn by the staff at McKenna’s Restaurant, the cheerleading uniforms for New London High School, many bridal gowns and custom window treatments. She also worked many years at Hideaway Lodge. She and her husband owned and operated Kristi’s Pizza in New London for many years.  She was active in the New London Outing Club, PTA, OLF, Council on Aging, Women’s Society, Red Hat Society, and others. (Chadwick Funeral & Cremation Service)

Dr. Thomas Lacey, 91, of Grantham, died Oct. 28, 2022. A U.S. Navy veteran of the Korean War, he had a 33-year career in education as a teacher and guidance counselor, 31 of those years in Port Jefferson, N.Y. He helped countless students attend their dream colleges and universities and started the Learning Disabilities Center and elementary guidance program. He had his Ph.D. in educational psychology from the University of Utah. (Chadwick Funeral & Cremation Service)

Ruth A. Webber, 63, of Jaffrey, died Oct. 29, 2022. She was an assistant scoutmaster, and later a scoutmaster with Troop 33 in Jaffrey, where she will be well remembered by several Eagle Scouts. She was also active with the troop committee, as well as being the Chartered Organization Representative. She also served as the unit commissioner for many years with both Troop 33 and Pack 33, and Pack 308 in Rindge, where she was also a den leader. She helped organize and coordinate various events in canoeing and orienteering with the Jaffrey Recreation Department. (Cournoyer Funeral Home & Cremation Center)

Lois Berry, 86, of Rochester, died Oct. 29, 2022. She worked as an auctioneer and wrote articles for the Unravel the Gavel newspaper. She was a post lieutenant governor of the Rochester Kiwanis. (R.M. Edgerly and Son, Inc.)

Carole Marie (Bertani) Archambault, 86, of New Boston, died Oct. 30, 2022. She volunteered at school and was a Girl Scout leader until the last of her daughters graduated. She also was a Columbiette, which supported the Knights of Columbus Post 5260.  She worked for Cumberland Farms as a manager, New Hampshire Insurance, Lovedy’s Flower Shop, Unicare and Southern New Hampshire University. (French & Rising Funeral Home)

George L. Andersen, 93, of Wilton, died Oct. 30, 2022. A U.S. Navy veteran, he worked as an engineer for the Ford Motor Co. before founding his own company, Production Cold Forming (PCF), in Madison Heights, Mich.  After selling PCF, he worked for companies in Michigan and Ohio. He was a pioneer of the cold forming process of manufacturing metal parts for the automotive and fastener industries. He performed in church choirs as well as the Philadelphia Bach Chorale, Orpheus Male Chorus, Pro-Arte Chorale, and Footlighter’s Theatre.  He sang with the Souhegan Valley Chorus and the Monadnock Chorus and its Chamber Choir. He and his wife were managers for the American Friends Service Committee on projects in the Detroit area.  In Columbus he was VP of PR for the Ohio Professional Engineering Society, and a founder and board member of the Central Ohio Bio-medical Engineering Council.  In the Wilton area, h and his wife served in a variety of capacities with Wilton’s Business Association, Wilton Main Street, The NH Guild of Woodworkers, and his beloved Monadnock Music and Monadnock Chorus. (Jellison Funeral Home)

Sonia (Sunny) Lee Lathan, 83, of Londonderry, died Oct. 29, 2022. She and her husband owned David Heller’s Men’s Clothing Store in Claremont for 10 years. She could take the most ordinary objects and turn them into works of art.  Whether it was doing the window displays for the store, decoupage, dried and fresh floral arrangements, or her passion for gardening, there were no limits to her visions or creativity.  (Lambert Funeral Home and Crematory)

Richard G. Pratt, 82, of Milford, died Oct. 31, 2022. A  U.S Army veteran, he was a police officer in Milford for 15 years, then went on to work as a police officer in Hollis. He was also a member of the Hollis Fire Department. His last job was working at the transfer station in Amherst. In his free time, he enjoyed riding motorcycles and had belonged to the Blue Knights Motorcycle Group. He was also a member of his local VFW. (Michaud Funeral Home and Crematorium)

Bertram V. Mills, 87, of Newport, died Oct. 30, 2022. He was a teacher of biology and general science in two different high schools and after getting a M.Ed. from Boston University, was a guidance director at two other N.H. high schools. In the late 1960s, he was named the first academic dean in the N.H. Vocational Technical College System, working in the Claremont college, now known as River Valley Community College. He also served as interim president. (Newton-Bartlett Funeral Home and Sugar River Crematory)

Louis Daniel Chicoine, known as “Captain Chic,” 77, of Portsmouth, died Oct, 28, 2022. A U.S. Army Airborne Infantry veteran, he was a member of the 173rd Airborne Brigade – the first soldiers on the ground in The Vietnam War. He spent 35 years in aviation,  retiring as Captain Chicoine with American Airlines (previously U.S. Airways). He wrote a book documenting his youth, jump school, and Vietnam.
He wore his Vietnam War hat each day and was honored to strike up conversations with fellow veterans. (Remick & Gendron Funeral Home)

Frank Bradford Tillotson Jr., 63, of Dalton, died Oct. 28, 2022. He had a radio show on the North Country Community Radio called “Nocturnal Caravan” and was known as “Bear on the Air.” He played music from the Grateful Dead and once showed up at his niece’s 7th birthday party dressed as a bear. (Ross Funeral Home)

Michael F. Donnelly, 79, a longtime resident of Amherst, died Oct. 29, 2022. As a Special Forces officer and member of Charlie Company, 3rd Battalion, 22nd Infantry, he served in Vietnam in 1968. he was awarded three Bronze Stars and a Purple Heart for service as part of the Tet Offensive, the Battle of Good Friday, and others. He worked at Digital Equipment Corporation before owning and operating a consulting business, Donnelly Associates, for 20 years in Amherst. He was a longtime parishioner of St. Patrick Catholic Church in Milford and a member of Knights of Columbus 4th Degree Milford Assembly No. 3035. (Smith & Heald Funeral Home)

Richard Donald D’Amato, 85, of Milford, died Oct. 29, 2022. A U.S. Army and N.H. National Guard veteran, he began his career at the Milford Cooperative  Bank in 1957 and rose through the ranks to the post of secretary-treasurer and then president in 1977. When he retired in 1996, the bank had grown into a large business on South Street with five branches. He was a member of the Lion’s Club and a long-time member and past president of the Rotary Club. He was a member and past Grand Knight of the Knights of Columbus. He served on several town boards and committees including the board of selectmen,  planning board, the Kaley Fund, and Milford Historical Society. (Smith & Heald Funeral Home)

Ramona Wadleigh, 93, of Claremont, died Oct. 28, 2022. She was known as Whit, and she and her husband ran Wadleigh’s Market in Claremont for over 45 years until his death in 2002. (Stringer Funeral Home)

Daniel A. Buslovich, 74, a lifelong Nashua resident, died Nov. 2, 2022. He was employed by the Commonwealth of Massachusetts as a computer technician for the Department of Corrections in Walpole, Mass. For many years, he served the City of Nashua as a trustee of Woodlawn and Pinewood Cemeteries and the former Lithuanian Cooperative Cemetery. (Farwell Funeral Service)