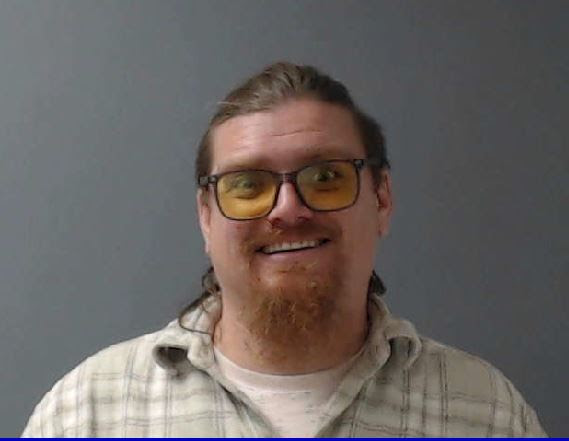 Mug shot of Joseph Hart released by Goffstown police. Hart was arrested outside the Institute of Politics at Saint Anselm College Wednesday night charged with criminal trespass and disorderly conduct. On Thursday he complained to police that Bolduc had assaulted him.

The libertarian activist who was arrested after approaching Republican U.S. Senate candidate Don Bolduc before his debate with U.S. Sen. Maggie Hassan at Saint Anselm College Wednesday said he filed a complaint against Bolduc on Thursday and wants to see him arrested.

Joseph Hart, 37, said he told Goffstown police that Bolduc elbowed him and incited police and Bolduc supporters against him by claiming he had hit Bolduc, which he said was untrue.

“I hope he is arrested and sees the consequence for his actions,” Hart said of Bolduc.

The incident occurred before the WMUR Hassan/Bolduc debate Wednesday night outside the college’s Institute of Politics.

Hart is a video blogger and occasionally co-hosts FreeTalkLive radio show, which was scheduled to air Thursday night from 7 p.m. to 10 p.m.

Earlier Thursday, Ian Freeman, who is also a libertarian activist in Keene and host of the radio show, posted a video online of the fracas that ensued between Bolduc and Hart with Freeman saying Bolduc lied about being hit by Bolduc.

Bolduc on Thursday told WMUR that he wouldn’t characterize what happened to him as an assault and said he also didn’t assault Hart.

Bolduc’s spokesman Kate Constantini didn’t immediately respond to Hart’s complaint, but earlier in the day told InDepthNH.org that what happened was an “attempted punch.”

Bolduc had alluded to being assaulted before the debate during the Wednesday night debate.

“As the General said on stage last night, it’s time to lower the temperature of the political discourse in this country,” Constantini said. “Prior to the debate, an individual in the crowd gathered outside attempted to punch the General and was quickly apprehended and arrested. We are grateful to the quick response from law enforcement on the scene.”

Hart said he also plans to file a civil lawsuit against Bolduc for slandering his name.

Hart was charged with criminal trespass and disorderly conduct.

“I approached Don Bolduc and told him he sucked and he should not go to war and what happened next he was accusing me saying I hit him,” Hart said in a telephone interview. “But in reality, he elbowed me and then he continued to incite police and supporters saying I hit him.”

Hart said he went to Goffstown police department Thursday afternoon to file the complaint against Bolduc but didn’t know if they would result in criminal charges.

Hart wouldn’t say where he lives, but said it is in New Hampshire. Goffstown police listed him as living in Greenville, R.I.

The Keene area has an active group of people who belong the Free State Project, but Freeman said he moved to New Hampshire as part of the movement but quit in 2016.

Hart said he calls himself a libertarian, but is considering joining the Free State Project so “we may have liberty in our lifetime.”

Hart said he grew up in Cumberland, R.I. and moved back and forth to New Hampshire, which is now his full-time home.

“I do think they will arrest him. There is video evidence,” Hart said.

The Free State Project was founded about 20 years ago by Jason Sorens who came up with the idea of having like-minded people move to New Hampshire to make political change.

The idea was to limit government and many Free Staters have run for political office locally and statewide.

“Already, there are thousands of individuals just like you right here in New Hampshire,” the Free State Project website states. “Together Free Staters have built an incredible, real-life community full of people who value liberty and responsibility.

“By concentrating our efforts in one small state with a pre-existing pro-liberty culture, we are turning the tide against big government, and we’re experiencing the benefits of expanded personal and economic freedoms,” according to the website.