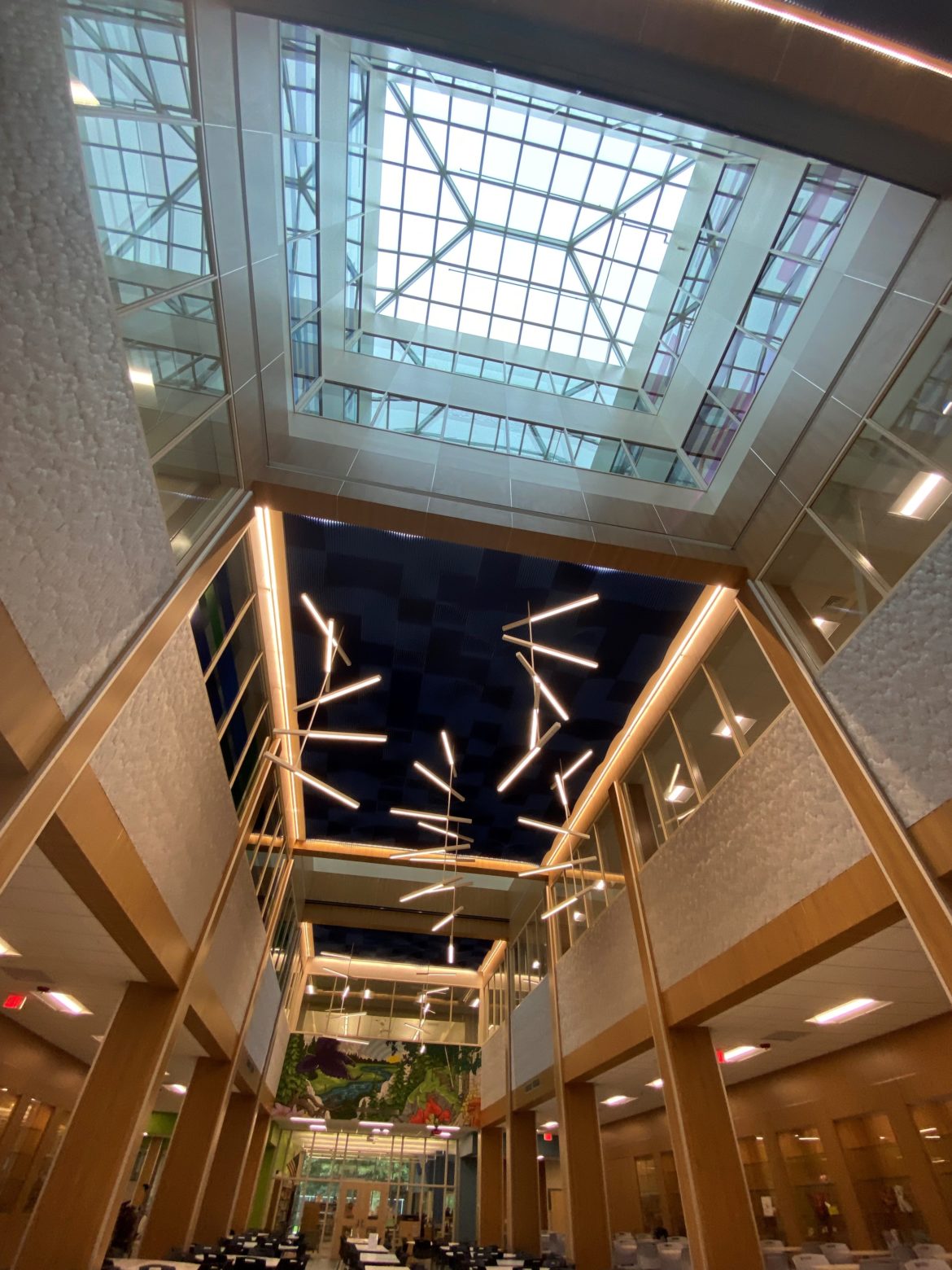 If you think energy efficiency is an imaginary friend, visit Durham and ask any middle school kid you happen to find.

Admittedly, even in a university town like Durham, your garden variety seventh grader probably knows nothing about the ratepayer-funded NHSaves program.  Therefore, she probably does not have an elevator speech to rebut the claim that if energy efficiency is so great, consumers can just buy it – no ratepayer-funded subsidies necessary.

But any of the local fifth through eighth graders can tell you all about the fabulous new Oyster River Middle School, which opened earlier this year as the first new building to win funding under the “Net Zero” program for new non-residential buildings sponsored by NHSaves.

Serving Durham, Lee, and Madbury, the new public school happens to be the very first building across Eversource’s entire footprint in New Hampshire, Massachusetts, and Connecticut to get all the way through what the company refers to as the “net zero pathway.”

At four stories, the Oyster River Middle School is something of a skyscraper by public school standards.  Yes there is an elevator, so it’s not out of the question to imagine students practicing their elevator speeches on public policy topics for English class.

Indeed, the school is notable for its unconventional learning spaces. Appended nearly every classroom there is a spacious and brightly colored breakout area, the better to meet the multifarious learning styles of bouncy pre-teens.

Long before the Governor appointed me Consumer Advocate, I was a self-appointed architecture critic, well qualified to opine on such matters by virtue of decades spent in or near buildings.  And it is in my capacity as an architecture critic that I hereby pronounce Oyster River Middle School a raving success.

Building up rather than out was a clever design move by the architects at the Lavallee/Brensinger firm in Manchester.  Avoiding the typical public school sprawl was not just an environmentally sound choice.  It makes Oyster River Middle School feel more intimate and home-like, everything being discernably closer to everything else than it would otherwise be.

When I visited recently, after the school day so as to avoid being disruptive, there was a bunch of students working on some kind of musical theater thing in the auditorium.  It’s really a theater-in-the round, no seats far from the stage, and the vibe is something like the newly refurbished Avery Fisher Hall in Manhattan where the New York Philharmonic plays.

Oyster River Middle School is built around a central, skylit atrium, which doubles as a dining area.  You could call it a cafeteria but that word does not really suit.  There are colorful murals depicting the local history of the Oyster River and its environs – plus lots and lots of different colors and materials everywhere so that nothing is drab or institutional.  Even the energy efficient light fixtures double as ceiling-hung sculpture.

What we have here is a moral and civic good.  The humans who learn and work in this bright new building cannot help but absorb the message that their community respects and values what happens there.

And it is all made possible, in part, by a grant from NHSaves as funded in this instance by the customers of Eversource and Unitil (the local gas utility).

Actually, “grant” isn’t really the right word.  NHSaves kicked in $146,900 to help the Oyster River Cooperative School District pay for the design.  The district gets another $146,900 next year, but only if the new school actually hits the “net zero” target.

What does this mean?  A net zero building uses very little energy for heating, cooling, and lighting – and, as to the energy it does use, the balance is made up by energy produced on site as measured annually.  That explains the vast canopy, covered in solar panels, covering an adjacent parking lot.

Unlike the photovoltaic pergola, the school’s ground source heat pumps are invisible.  So are most of the building’s energy management systems although, in the lobby, there is an oversized touch screen that yields all kinds of data about how those systems are performing in real time.

Outside, the cladding of the new Oyster River Middle School is – well, busy.  What the experts call the building envelope is an agreeable mash-up of metal wall tiles, stone composite wall panels, brick walls, and aluminum curtain walls.

Maybe if you check it out you will find yourself pining for the days when buildings were just “brick” or “concrete” or “wood.”  If so, console yourself with the news that, here, the “all of the above” approach to cladding results in a minimum insulating value of R-34.

We’ll spare you the definition of, and formula for, R values.  Let’s just say that R 34 is awesome.  To improve on it, you’d have to coat the school in polystyrene as if it were a giant coffee cup.

Oh, and the roof?  It’s R-60.  How cool is that?  Especially when it’s hot outside but the school stays comfortable.

This was a cooperative venture.  Experts at Eversource, DMI Engineers, and Lavallee/Brensinger were at the drawing board for three years to figure everything out.  Eversource estimates the gross annual savings from the project will be 278,660 kilowatt-hours.

My tour of the new Oyster River Middle School was not courtesy of those experts but, rather, school district Business Administrator Sue Caswell.  Her title means she is a numbers person – some would say “bean counter” – but the pride she takes in her connection to this aesthetic triumph was obvious as she graciously indulged my wish to check out every little corner of the place.

In other words, you don’t have to have an advanced degree in architecture or engineering to know a great building when you see one.  Our public sphere, in particular, could use more projects like this.  It is yet another reason why NHSaves is a key element of our shared energy future.