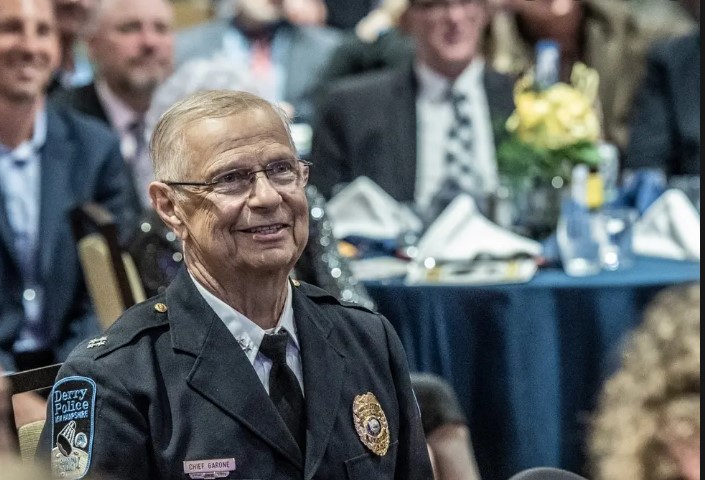 At a recent ceremony celebrating his retirement, it was noted that he possibly could have been the longest-serving police chief in the United States. Garone became Derry Police Chief on October 15, 1964, and retired on September 30, 2022.

New Hampshire Attorney General John M. Formella released a statement saying, “While we are saddened to learn of his passing, we are inspired by his lifetime of selfless public service. Chief Garone will long be remembered for his dedication to the people of New Hampshire and his half-century of work leading the Derry Police Department.”

U.S. Senator Jeanne Shaheen’s (D-NH) statement spoke of his leadership. “Chief Garone gave Derry five decades of service – five decades of mentoring young officers, providing steadfast leadership to the Derry PD, and giving comfort to community members who knew they could rely and trust him with their families’ safety.”

They expressed their thoughts and condolences to his wife, Blanche, and children, Vicky and Michael.

He leaves a legacy as well as a father and grandfather, US Marine, Rotarian, and the 1984 Derry Citizen of the Year. Chief Garone lived by the belief of “service above self.”

Gov. Chris Sununu directed that all flags on public buildings and grounds in the State of New Hampshire be lowered to half-staff on October 20, 2022 from sunrise to sunset, in recognition of the funeral services for Garone.

“As New Hampshire’s longest serving Chief of Police, Chief Garone’s half a century of leadership to his community is extraordinary and unprecedented,” said Sununu. “His loss will be felt by many, but the legacy he leaves behind will benefit Derry and New Hampshire for generations to come.”

Funeral services will be announced at a later date.