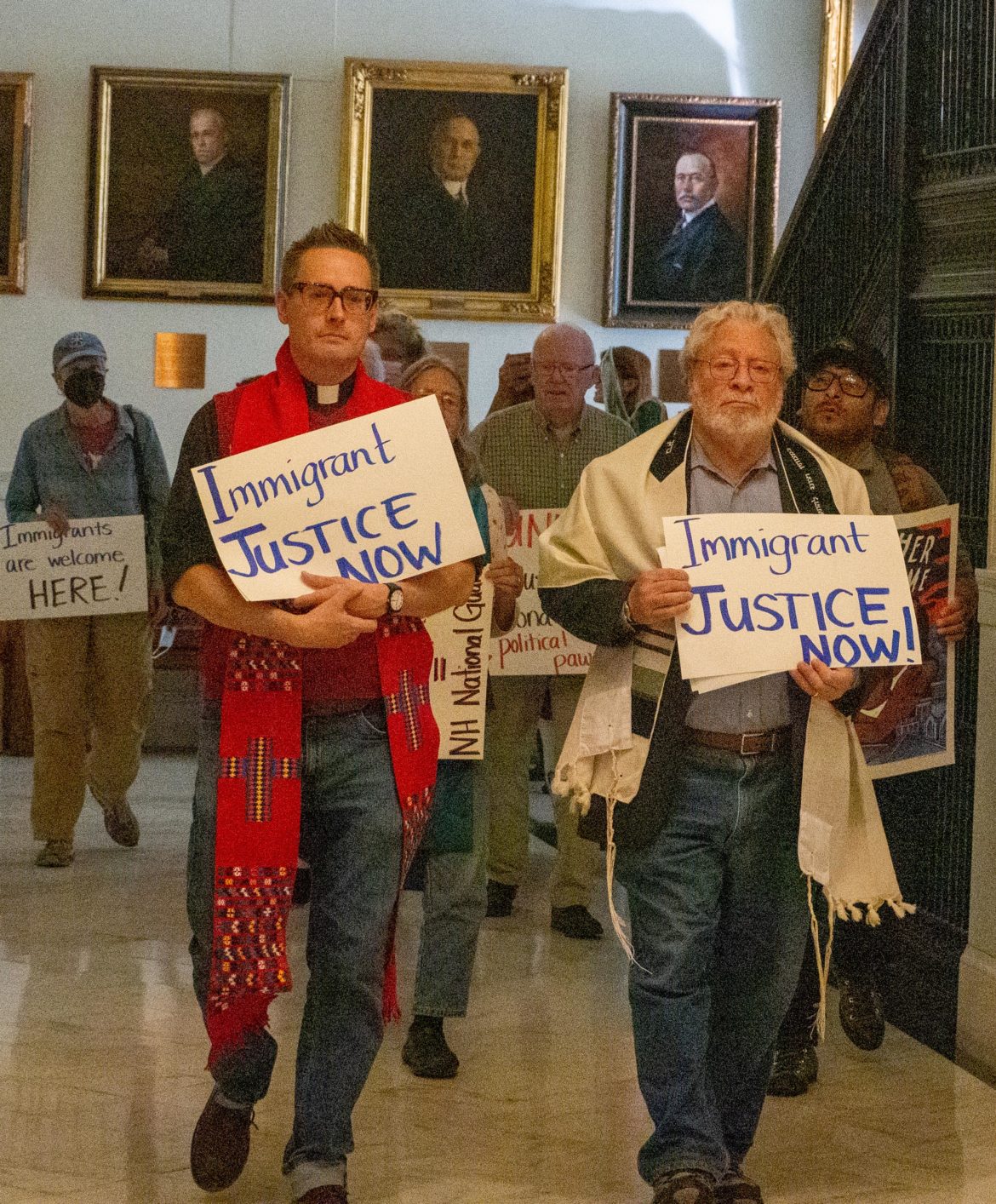 Arnie Alpert is a retired activist, organizer, and community educator long involved in movements for social and economic justice. Arnie writes this occasional column Active with the Activists for InDepthNH.org.

CONCORD—Two dozen members of the NH Immigrant Solidarity Network trooped into Gov. Chris Sununu’s office Friday afternoon to call for an end to the deployment of NH National Guard members along the US-Mexico border.

Sununu announced the deployment four days earlier, saying the dispatch of approximately 164 soldiers for a yearlong assignment would address “the ongoing humanitarian crisis along our southern border.”

“There is indeed a humanitarian crisis at the border,” said a letter the group delivered to an aide in the governor’s State House office.  “Many ordinary, law-abiding people have been forced to flee their home countries due to shocking violence directed at them and their families, as well as the impact of climate change.  After undertaking the arduous and dangerous trip to emigrate to the United States, risking their lives and their freedom, to then be detained and mistreated is indeed a humanitarian crisis.”

According to the governor’s statement, “Approximately 120 soldiers from the 237th Military Police Company will be deployed to primarily surveillance sites along the border. Soldiers are prohibited from being in contact with illegal migrants and notify CBP [Customs and Border Protection] of any border crossing to primarily stem the flow of people and illicit drugs, weapons and money.”

Those activities don’t address the crisis faced by migrants, the letter said.  Instead of providing humanitarian assistance, the Guard members will be “helping the federal Border Patrol deny families their legal right to apply for asylum in the U.S.”

The Immigrant Solidarity Network was created in 2017 by faith-based groups to provide support for local immigrants threatened with deportation.  For several years it conducted regular prayer vigils outside the Norris Cotton Federal Building in Manchester, where immigrants meet with agents of Immigration and Customs Enforcement to determine if they will be deported or allowed to remain in their new home communities.  The group, which is coordinated by the Granite State Organizing Project (GSOP), has recently resumed holding monthly vigils.

In addition to GSOP, the Solidarity Network’s letter was co-signed by the NH Council of Churches, American Friends Service Committee, NH Alliance of Immigrants and Refugees, Economic Mission Group of the United Church of Christ, Jewish Progressive Action, the Granite State Interfaith Action Fund, and the co-pastors of the Meriden Congregational Church.

Speaking by State House steps, the Rev. Jason Wells of St. Matthews Episcopal Church in Goffstown, decried the “political nature” of the deployment.  “We also recognize that the use of the National Guard can be to help people,” he said.  “Our Guard might be sent to help people affected by Hurricane Ian.  They could be doing good. And instead, they are being used to harm people.”

Rev. Wells spoke during a short program that included a land acknowledgment, a prayer, and a song, while Sarah Jane Knoy of the GSOP circulated through the crowd with a clipboard gathering individual signatures on the letter.

Reading the letter aloud before visiting the governor’s office, Ken Barnes said, “More border militarization is not what is needed.  Instead, what is needed are resources which ensure protection of the rights of migrants to seek asylum in this country, resources which support the desperate human beings who look to the United States as a refuge from intolerable violence.”

The lengthy deployment will also harm the soldiers’ families, employers, and communities, the letter added.

In the reception area outside the governor’s office, Trevor McAden accepted the letter and told Barnes and Rev. Wells he would put it on the governor’s desk.

“We’ll be waiting for an appointment,” Rev. Wells responded.

Outside the State House a few minutes later, Rev. Wells said he hopes to hear back from the governor by next week.  If not, he said the Immigrant Solidarity Network will discuss its next steps when it meets again in November.

Addressing the circle of activists, Sebastian Fuentes of Rights and Democracy said, “I hope this small, but meaningful rally that we’re doing right now softens the heart of the governor.”