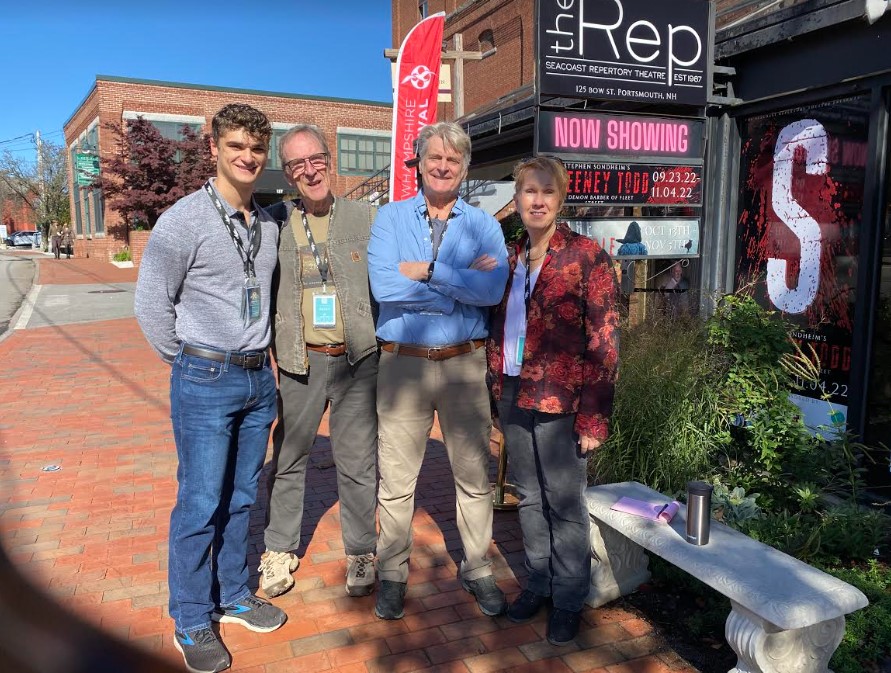 New Hampshire Film Festival is underway in Portsmouth. The folks behind the film "Not on This Night," which was filmed at the Rochester Opera House, are from left: CJ Voteur; actor, Bill Humphreys, director; Brad Branch, producer; Deborah Barry, casting director.

Editor’s Note: STAY TUNED: This story will be updated as Susan Dromey Heeter shares her insights from Portsmouth.

If you are a high school teacher, you know that everyday is something of a film festival: drama, anxiety, comedy, quick direction, vantage points, actors,  bright lights.  This weekend marks the 20th Anniversary of the New Hampshire Film Fest, held in Portsmouth, New Hampshire.  And, I am attending this festival in order to provide you, dear InDepthNH readers, insider information, insight.  I’ll ask and answer questions, watch some incredible films, compare the processes of film making to classroom management and teaching. I’ve taken a day from my brick and mortar school to play with other directors, other actors – to witness drama in other forms beyond the high school hallways.

I cannot wait to see what I find. Come along.

Could a film festival be more fun? Not possible – today I not only watched Not on This Night, but also shorts including Out With It; Stitch, Breathe, Speak and Adventures of Sleepy Head.  Not On This Night was filmed entirely in the Rochester Music Hall and stars CJ Voteur of Brentwood and a current student at UNH majoring in English and Journalism. The film was directed by Bill Humphreys and can be seen at StageWrightFilms.com.  An amazing story set in France during World War II, it celebrates peace between enemies, kindness and illustrates how the breaking of bread can do so much.

There are both feature length films as well as shorts at the New Hampshire Film Festival.  I just left a series of shorts, one a mini documentary featuring quilts made in the remembrance of George Floyd.  Stitch, Breathe, Speak celebrates not only community and activism but the deep deep sorrow embedded in the American psyche, in racism, in the hurt that goes so far beneath the surface.

I ran into the Soldati family after watching Gemma Soldati’s film, The Adventures of Sleepyhead.  Currently, Gemma Soldati has a program on New Hampshire Public Television, this film makes sense as to how she would be adored by young and old alike: clever, funny, ridiculous at moments, it was lovely to watch.

This festival continues until Sunday; I’m going to continue the fun of today as I’ll go to one of the many venues to watch film. This event is organized, fun and, really, the place to be.

Generally, when I’m in a theater I know exactly what film is coming up. At a film festival, I give myself the gift of surprise.  So when I opted to attend Delmarva and the Ground for Change, I fully expected a film about a girl named Delmarva and some levity. This was not the case, instead, I learned an enormous amount about climate action, soil and carbon emissions, crop coverage and the hard-working men and women of farms in Maryland.  It was fascinating. The film invited its viewer to understand the way climate crisis has deeply affected farming.

A film festival is an opening for curiosity, for education, for a chance to learn. I’m done for today but will continue to encourage your own visit to Portsmouth or at least give you a vicarious seat.