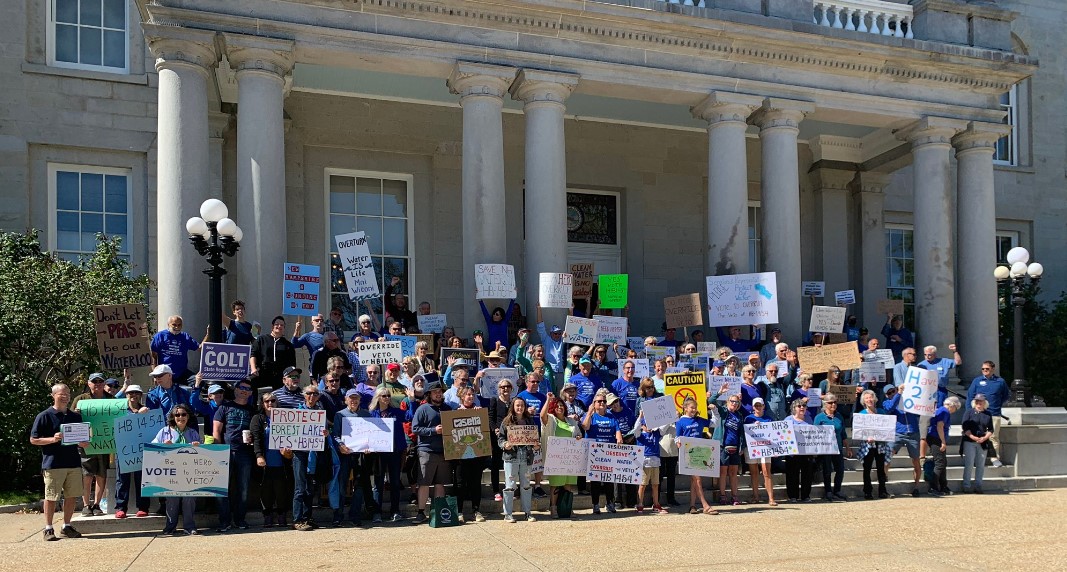 Photo posted on Twitter Thursday of people who went to the State House Thursday hoping lawmakers would override Gov. Chris Sununu's veto of HB 1454, but it didn't happen.

CONCORD – Following the vote in the state Senate Thursday to sustain Gov. Chris Sununu’s veto of HB 1454, which would establish a formula for determining the distance a new landfill must be located from perennial water sources, Rep. Megan Murray, D-Amherst, has re-filed the bill for the 2023 legislative session.

On Thursday, the House voted overwhelmingly to override Sununu’s veto of the bill, 256-65, but the Senate failed to override it on a 12-11 vote, when a two-thirds majority was needed to overturn the governor’s action.

“Protecting New Hampshire’s natural resources is a core function of state government, and I am highly encouraged by the House’s strong bipartisan support for legislation assuring our lakes, rivers, and drinking water are protected in perpetuity,” Murray said Friday.

“NOTHING is more important than protecting the resources that our communities thrive on. Despite the setback legislation not making it this time, there remains a steadfast commitment to getting this work done on behalf of the people of New Hampshire.  The presence of PFAS and other groundwater toxins is a concern Granite Staters in every community share, and we are listening,” she said.

“If I win the North Country seat I will surely cosponsor the re-filed bill with Rep. Megan Murray, who serves on the House Environment and Agriculture Committee. It’s too bad the Senate didn’t vote to override the veto, but I’m sure there was a lot of political pressure from the Corner Office,” Tucker said.

All of Sununu’s eight vetoes were sustained by a majority vote, except for House Bill 1454, which establishes a formula for determining the distance a new landfill has to be from a perennial river, lake, or coastal water.

Versions of the bill have been before lawmakers for a number of years after a new landfill was proposed for Dalton by Vermont-based Casella Waste Systems near Forest Lake, according to a news report by Garry Rayno, InDepthNH.org.

Dr. Adam Finkel, a resident of Dalton and former member of the EPA Science Advisory Board, said he was grateful to Rep. Murray and others for recognizing that HB 1454 was a simple, 400-word fix to an absolutely glaring mistake in the DES code of regulations.

Reached at the grocery store Friday, Jon Swan, founder of Save Forest Lake and a resident of Dalton, said, “God Bless Rep. Murray and the 266 other elected officials in the State House who recognize the importance of this bill and the efforts of so many behind it!

“You have me walking into the grocery store with tears in me eyes, joyful ones, thank you!”