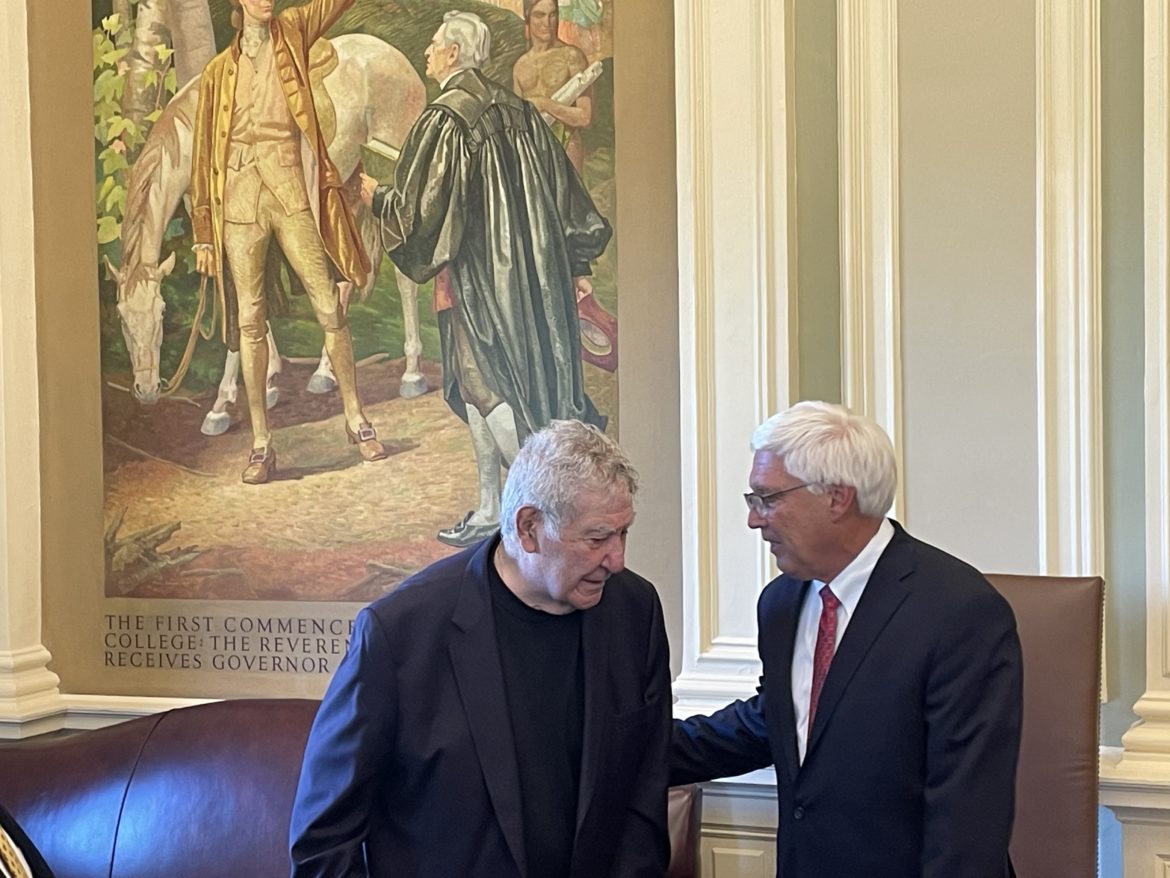 The Senate honored Senate President Chuck Morse, R-Salem, Thursday for his service. Morse ran unsuccessfully for his party’s nomination to the U.S. Senate. Morse, right, is pictured in the Senate talking with state Sen. Lou D'Allesandro, D-Manchester. The House and Senate met Thursday and failed to override eight vetoes by Gov. Chris Sununu.

CONCORD — Gov. Chris Sununu Thursday had a perfect record as the legislature sustained all eight of his vetoes including one that would have enhanced regulations for siting landfills that was overridden in the House.

The bills ranged from landfill siting to masks in public schools and redrawing the political boundaries of the state’s two Congressional districts.

All of his vetoes were sustained by a majority vote, except for House Bill 1454, which establishes a formula for determining the distance a new landfill has to be from a perennial river, lake, or coastal water.

Versions of the bill have been before lawmakers for a number of years after a new landfill was proposed for Dalton by Vermont-based Casella Waste Systems near Forest Lake.

The House voted overwhelmingly to override Sununu’s veto, 256-65, but the Senate failed to override it on a 12-11 vote, when a two-thirds majority was needed to overturn the governor’s action.

After the vote, Jon Swan, founder of Save Forest Lake and a resident of Dalton, said his group has grown in statewide strength and would be back next year to advance environmental protection bills.

“I didn’t believe we would get this far,” he said, just after the vote in the Senate, noting he felt there was possibly corporate influence.

“We’ll save Forest Lake,” Swan said, but he said he worried about the siting of other landfills across the state.

He said it was shameful that the governor vetoed the bill and noted more than 80 percent of the House’s support for an override showed that the people of the state understand and support more protections for landfills.

The prime sponsor of the bill, Rep. Edith Tucker, D-Randolph, noted the growing support for the bill which would protect the state’s waters.

“In the last year we have learned a lot more about contaminants in groundwater and PFCs,” she said. “There are all sorts of things that can happen under our feet.”

She said she heard claims recently the bill could affect the expansion of existing landfills, but that is not true and she made sure the bill would only apply to new landfills.

The bill had bipartisan support as Rep. Walter Stapleton, R-Claremont, said the state should not take a chance with landfill leakage.

“Water is life,” he said. “This bill is reasonable and common sense protection of water resources from leakage from landfills from a breach or failure of landfill linings.”

The House voted to sustain the governor’s veto of House Bill 1625, which would have repealed the law establishing buffer zones around clinics where abortions are performed.

Sununu said the law has worked because in the eight years since it was passed, there have been no instances of an individual being harmed by it.

Veto supporters said the bill protects the public safety, with Rep. Marjorie Smith, D-Durham, saying with 16 states recently banning abortion, pro-life advocates are looking for something to do and some are coming to New Hampshire to stand in front of clinics.

But others urged lawmakers to override the veto saying the bill has never been used, never will be used and should be removed from statutes.

Rep. Kurt Wuelper, R-Strafford, said there has never been a single complaint since the bill passed.

“It does not happen,” he said, “because people who advocate saving babies’ lives do so out of the spirit of love not hate.”

The House and Senate sustained the governor’s veto of two bills that would have made significant changes to the political boundaries of the state’s two Congressional districts.

House supporters noted the bill would have moved about 36 percent of the state’s population and would mean both the Republican and Democratic District 1 candidates elected Tuesday would no longer live in that district.

But those seeking to override said the proposed changes would mean more compact districts.

In the Senate, Senate Minority Leader Donna Soucy, D-Manchester, supported the veto saying “the draft before us would require drastic changes…that the people did not want.”

When lawmakers and the governor could not agree on a plan, the state Supreme Court hired a special master to redraw the lines.

The master devised a plan making minimal changes in the two districts, moving five small towns in the North Country from District 1 to District 2.

The House sustained the governor’s veto of House Bill 1131, which would have prohibited school boards from mandating mask wearing for students in public schools on a 170-150 vote.

Sununu in his veto said the decision should be left to local boards who are closest to the situation and the state should not interfere with those decisions.

Proponents of overriding the bill said parents should have the right to determine their child’s health care and not some unelected superintendent.

The House voted 183-143 to sustain the governor’s veto of House Bill 319 which would have required students in state colleges and universities to pass a civic test to graduate. The test would be the United States Citizenship and Immigration Services civics naturalization test.

Sununu noted in his veto that a new law requires high school seniors to pass the same test to graduate, so the requirement would essentially only impact out-of-state students and discourage them from attending New Hampshire public colleges and universities.

The governor was also concerned the bill would be the first graduation mandate imposed on higher education institutions by the legislature and could lead to more mandates in the future.

Proponents of the bill said there is a gap in students between those now required to pass the test to graduate from high school and older students.

Some believe the drug treats and helps prevent COVID-19 infections, but scientific evidence does not indicate that is true.

Sununu said currently the state has only four instances for standing orders for medications and that should not be expanded without more vigorous research.

He also notes a doctor can prescribe Ivermectin for a patient which is preferable to a standing order.

Veto supporters said research ought to guide the practice of medicine, not legislation.

Others said parents should have the right to give their children what they believe is the best medicine for them without government interference.

The House voted 167-157 to sustain the governor’s veto of House Bill 275, which would have limited the governor’s power to continue a state of emergency without legislative approval while giving the legislature greater authority over a declared emergency.

Sununu vetoed the bill saying the governor’s authority during a state of emergency had been revised the year before and this would end emergency services if the legislature failed to act after 21 days.

Several lawmakers argued the legislature is the voice of the people and needs to be able to intervene in a state of emergency.

They said the current arrangement in an emergency gives the executive branch too much power at the expense of the legislative branch.

At the end of Thursday’s sessions, both the House and Senate honored lawmakers who will not be returning next term because they ran for higher office, or lost a primary or decided not to run again.

Unless there is an emergency session, the House and Senate will not meet again until Organization Day, the first Wednesday in December, Dec. 7.