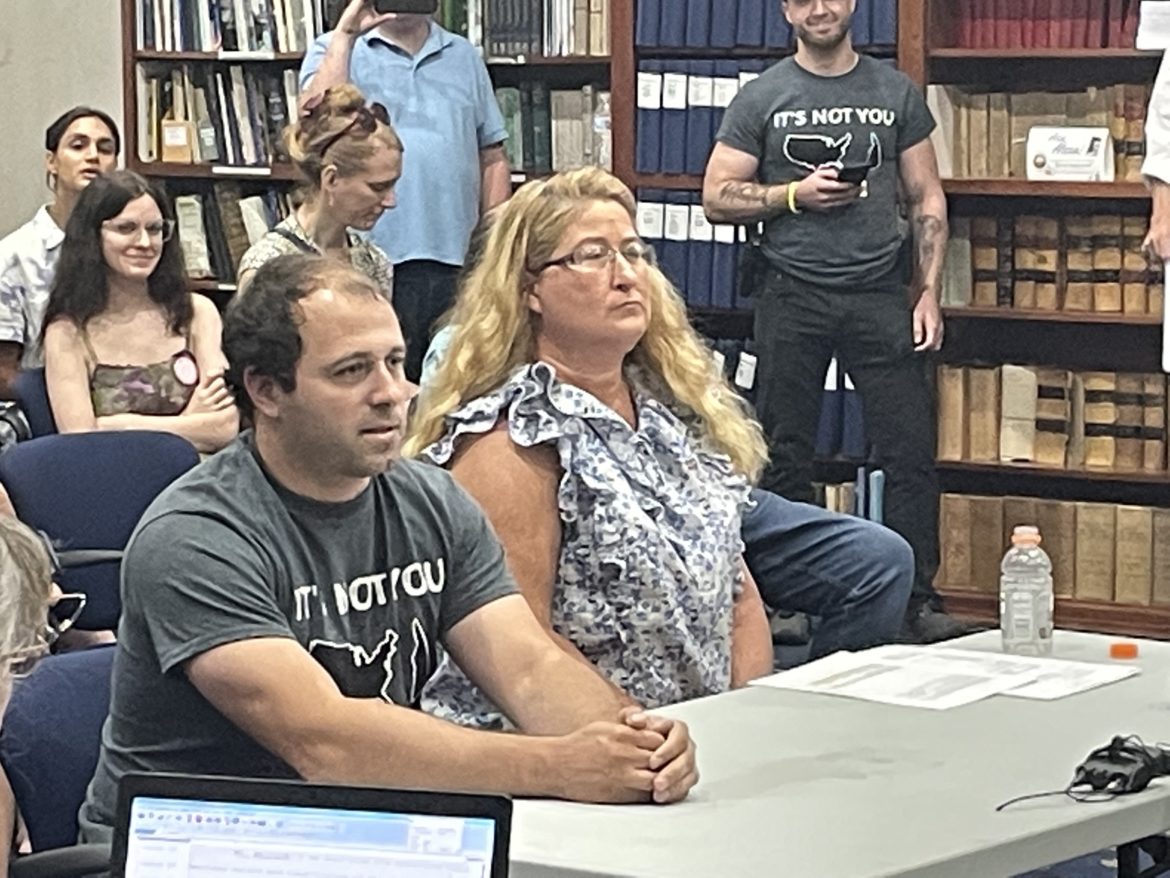 CONCORD — The New Hampshire Ballot Law Commission voted unanimously to dismiss a petition to disqualify from election 14 Republican candidates who supported the failed bill seeking a constitutional amendment on the state seceding from the union or did not oppose efforts to kill it.

The five members of the commission said at the meeting Wednesday they based the decision on a lack of authority and jurisdiction.

Atkinson resident Karen Steele petitioned the commission asserting that some state Representatives should be considered unqualified to run for or hold office under the U.S. Constitution’s 14th Amendment under Section 3 which states that no person who has previously taken an oath to the United States to support the Constitution “shall have engaged in insurrection or rebellion against the same, or given aid or comfort to the enemies thereof.”

Steele, who said she has never run for office but was appalled by the bill, said she had to be escorted from the meeting because of Free Staters waiting for her.

“I just got escorted by the New Hampshire Secretary of State (David Scanlan) to protect me from the ambush of Free Staters,” Steele said in a text to InDepthNH.org following the commission meeting at the state archives in Concord.

“The Ballot Law Commission agreed that the secessionist activity was abhorrent (their word), but they rejected my petition on the grounds that they only have jurisdiction over New Hampshire laws and not over the U.S. Constitution,” Steele said.

She said Free State activist Christopher Waid and others followed her to her car. A video shows Waid videotaping her saying: “Hi there Karen. I just wanted to thank you so much for bringing attention to the New Hampshire independence movement. We couldn’t have done it without you.”

“We weren’t stalking her,” Waid said. “We were trying to get an interview with her. We have our own media outlets.” Waid is a correspondent for Free Keene, an online Free Staters publication.

During the meeting Steele said her research has shown that the commission has the power to remove such candidates for office and said her focus was more on those who have given “aid and comfort” rather than the “engaged in insurrection” portion of the Constitution.

“The seven sponsors of the bill for a plan for New Hampshire to secede from the United States and the additional seven Representatives who voted to not kill the secession bill have violated Sections 1 & 3 of the 14th Amendment of the United States Constitution and should not be allowed to hold public office at the federal or state level.  Therefore, they are not qualified to be on the ballot,” Steele said in her presentation.

“This isn’t impeaching or removing them from their current position – that’s a different process.  This is the Ballot Law Commission recognizing that these secessionists are not eligible to hold office and are ineligible to run for State or Federal office,” she said. Her presentation can be read here: https://indepthnh.org/wp-content/uploads/2022/08/2022-Aug-24-BLC-Sections-1and-3-of-14th-Amendment-1-1.docx

He previously told a reporter: “Only the people of the state may change their government’s constitution. To sanction a legislator for providing a non-violent avenue to peaceful reform would be chilling and invite other methods which would include insurrection and rebellion.”

Asked at the meeting by Chairman Brad Cook if any one of those candidates wanted to testify, Rep. Santonastaso said the petition had no merit.

After the meeting, he said secession is a good idea because “the federal government has gone completely rogue. It doesn’t serve the interests of the American people.”

Others in the audience of more than 40 people, most who were libertarians or members of the Free State movement, said the proposed constitutional amendment was merely to allow voters to decide on secession on a ballot vote.

Assistant Attorney General Kevin Scura said it is the Ballot Law Commission that has the right to interpret the law and determine who gets to be on the ballot.

Commissioner Bob Letourneau noted that these legislators attempted to deny citizens the rights of citizenship but when it came time to vote he said he “regretted” it, but needed to support denial based on law.

Commissioner David Campbell said he does not believe the commission has the right to remove the candidates based on the petition.

“The slope would get slippery awfully quick,” Campbell said.

Cook said the commission declined to interpret the Constitution because it is statutorily created, and this is “above our pay grade.”

Commissioner Eugene Van Loan said he felt the actions did not come close to insurrection or rebellion.

“Who is the enemy who is being referred to?” he said. “I don’t see anything on the merits here.”

Cook asked Steele a theoretical question if someone refused to support providing aid to the Ukrainians, would that be supporting Russia?

Steele did not respond but thanked the commission for its consideration following the vote.