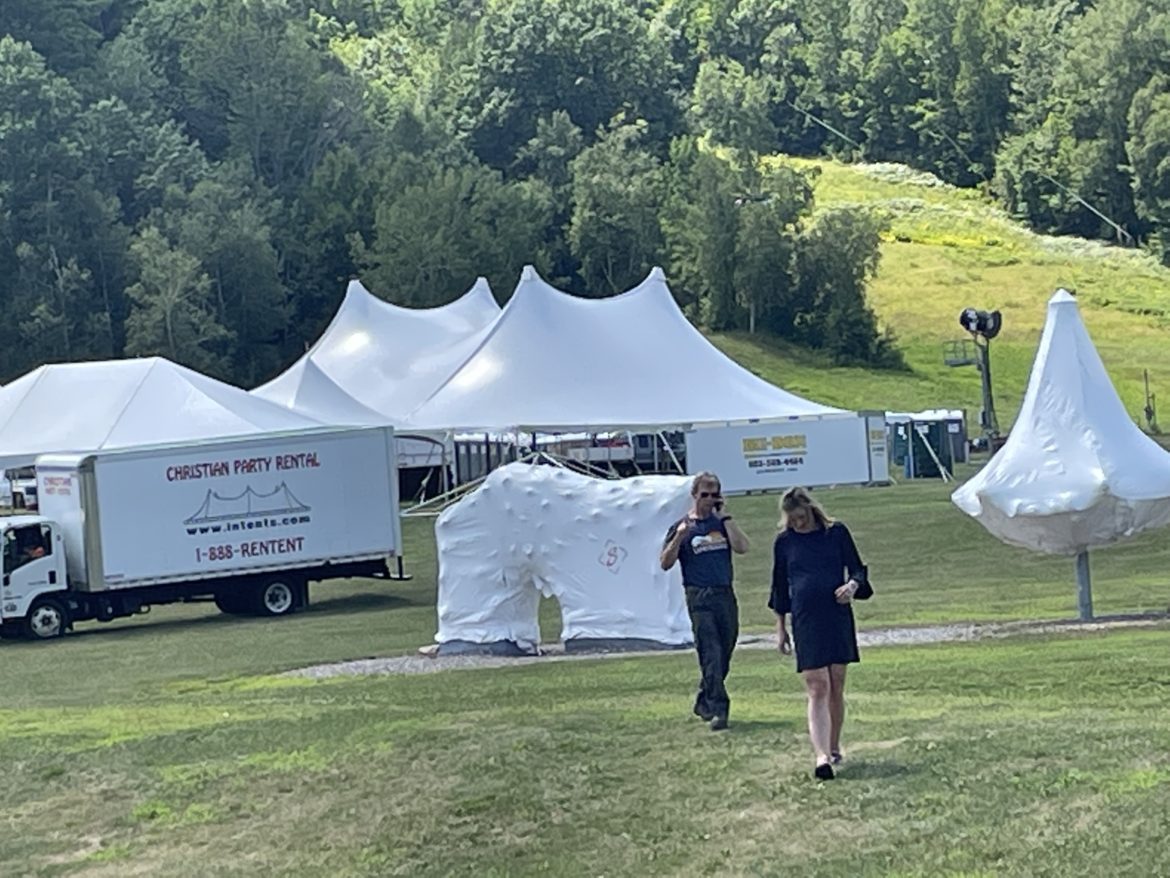 Gunstock Area Commissioners Doug Lambert and Jade Wood are pictured at the area where SoulFest is scheduled to start Aug. 4 at Gunstock.

Lambert said he has been too busy helping to keep Gunstock moving forward to look into the $500 check the Gunstock Area Commission gave in 2020 to Gov. Sununu’s campaign and called it a “side issue.”

Sununu’s campaign manager said there was nothing wrong with the donation, but Free Stater Rep. Mike Sylvia, R-Belmont, chairman of the Belknap County Delegation, called it inappropriate and possibly illegal.

Lambert said in the past dozen days of turmoil at the mountain, Sununu has offered no help. Sununu did release a letter the day after Gunstock General Manager Tom Day, senior managers and Commissioner Gary Kiedaisch resigned July 20, offering the management team a state job with the Parks Department and Cannon Mountain if they don’t return to Gunstock.

Their resignations have closed the county-owned recreation facility in Gilford except for the campground.

“He claims he cares about Gunstock, but he’s certainly been no help,” Lambert said of Sununu.

“I’ve been on the ground for 10 days and not heard from the governor. That guys been no help,” Lambert said of Sununu. “He’s actually stirred the pot.”

Sununu’s press office did not respond to a request for comment, but asked at least one other Republican House member, Rep. Mike Bordes, R-Laconia, member to do so.

“I heard that Commissioner Lambert criticized Governor Sununu and wanted to send my thoughts on that as a member of the Belknap County Delegation,” Bordes said in an email to InDepthNH.org.

“This issue has been bubbling locally for over a year, but once Governor Sununu got involved, he elevated it to a statewide issue and helped rally support for Gunstock.  He has been one of the most proactive voices out there in terms of doing what’s right for Gunstock, the mountain’s employees, and the county,” Bordes wrote.

“I’ve had conversations with the Governor about the mountain, and can tell you that his help and encouragement have done a great deal. The morale boost he’s provided alone has been motivating and appreciated by so many,” Bordes said.

On Twitter, William Tucker posted as @miscellanyblue a copy showing Strang as signer and Sylvia as one of a half a dozen House members among those signing a petition to declare the 2020 election null and void and to terminate the state of New Hampshire. The original petition was sent to the Secretary of State.

Also on Twitter, Tucker posted a video of Rep. Paul Terry, R-Alton, in which he compares the vote to remove Commissioner Strang to Jesus’ crucifixion: “They have betrayed their God, they have betrayed the Constitution, they’re on the verge of committing a great wrong by sending a man to his doom…” Terry said in the video.

Lambert was preparing Monday morning for Monday night’s meeting of the Belknap County Delegation where he hopes they will remove Commissioner Strang and appoint a temporary replacement so the five-member commission will have a quorum of three.

Lambert and Jade Wood are the two remaining Gunstock Area Commissioners along with Strang, who has said he will resign as requested if the Delegation appoints a new member Monday night, although Lambert isn’t convinced he will.

“He says a lot of things,” Lambert said Monday morning.

On Sunday night, commissioners voted to return the staff to their jobs, at least for the SoulFest, a Christian music festival, expected to draw more than 6,000 youths for a three-day concert starting Aug. 4 at the resort.

The bottom line, he said, is that Sylvia and Rep. Norm Silber, R-Gilford, do not believe government should be involved in a ski area, Lambert said.

Sylvia moved to the state as part of the Free State Movement, which Sununu says he supports as libertarians who want to reduce government, but he called Sylvia and two other House members from Belknap County “crazy” at a press conference last week.

“You can have that debate,” Lambert said, but it’s state law that Gunstock is county-owned and would need to be done legislatively for that to change.

For Lambert, the picture is clear that to get the senior management back to work, Strang must go.

Lambert considers himself a “conservative open-minded person,” but as a commissioner his first priority is to get Gunstock reopened, he said.

“It needs to be a majority. The magic number is 11,” Lambert said.

He said he has been assured there are enough votes to remove Strang.

That’s the only way the senior management will return, he said. Commissioner Peter Ness has already resigned.

The other full-time employees are still working, he said, but 70 jobs could be lost if Gunstock doesn’t reopen, Lambert said.

“The biggest and best thing would be for Commissioner Strang to resign,” Lambert said.

Lambert said questions have been raised about Monday night’s meeting notice of only one day.

He said he expects Belknap County Attorney Andrew Livernois will be at the meeting to offer the opinion that the meeting is legal.

In a news release, Sununu’s office said on Monday afternoon Sununu and his father, former Gov. John H. Sununu are traveling to Des Moines, Iowa, for the Run GenZ Summer Summit. On Monday night, they will participate in a fireside chat with former Iowa Governor Terry Branstad on the importance of the New Hampshire First in the Nation Presidential Primary and the Iowa Caucus, the news release said.