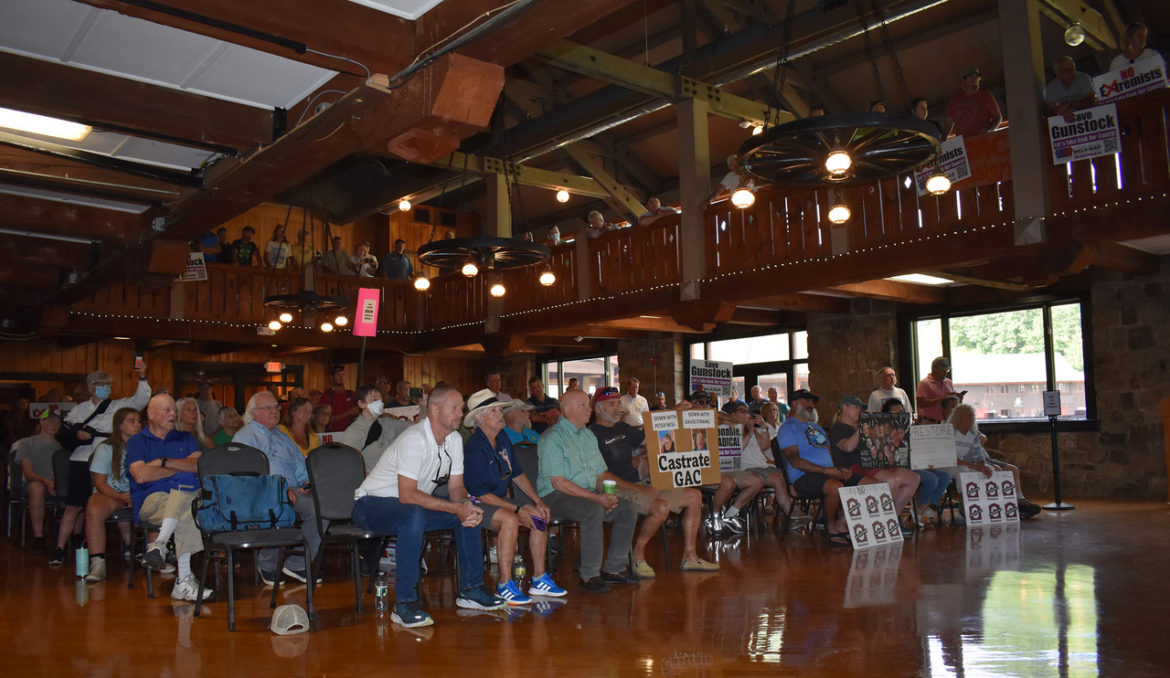 GILFORD — Amidst calls for their resignations — including from other commissioners — the chair and vice-chair of the Gunstock Area Commission finally walked of what was to be a special non-public session to address the issues raised by a mass walkout of Gunstock’s senior management team that led to the closure of the county-owned recreational area.

Supporters of Gunstock filled the seats of the main lodge and leaned from the railings on the second floor, shouting down Chair Peter Ness and Vice-Chair Dr. David Strang as they tried to explain the urgency of addressing matters that they said needed authorization if Gunstock Mountain Resort is to reopen.

They called for a vote to enter non-public session without citing the provisions of RSA 91-A, as required by the right-to-know law, and when they were asked to do so, Ness refused, saying it had been posted on the meeting notice.

Commissioners Jade Wood and Doug Lambert voted against holding a non-public session without first hearing from the people who had come to voice their support for Gunstock, and they read from prepared statements that cited their oaths of office.

“I vowed that I would facilitate transparency in honoring the mission, working toward a financially self-sustaining recreation area that we can proudly entrust to future generations,” Wood said. “The Gunstock Area Commission is appointed by the Belknap County Delegation with the responsibility of managing Gunstock Mountain Resort as a self-sustaining organization.”

She also cited the ethics policy she signed. The mass resignations that occurred on July 20 followed months of questioning that staff members found to be disrespectful. Lambert had been one of those asking questions “as part of our jobs” but the administrative team found him to be respectful in his approach.

Both Lambert and Wood have been visiting Gunstock daily since the resignations, listening to the staff and trying to find a way forward. Neither Ness nor Strang have gone to the mountain.

In his remarks, Lambert said the senior management team had indicated that they would return to their jobs if Ness and Strang were removed from the commission.

“I have come to the conclusion that to even begin to attempt to construct the necessary leadership team required to get this facility open for the winter is an impossible task,” Lambert said. “While some might view [seeking the resignations of Ness and Strang] as a capitulation, I can only stand before you and disagree — it is a solution to the very dire circumstances placed before us today. There is no other viable way forward, so, therefore, I am asking them to do just that.”

Both Wood and Lambert noted that they had been appointed by the same delegation members as Ness and Strang, but that did not mean they hold identical views. Lambert said that, as he has learned more about Gunstock’s operation, he has changed his initial impressions.

With Commissioner Gary Kiedaisch having resigned at the same time the Gunstock management team left last week, there was a 2-2 split on the commission, with Wood and Lambert asking for public comment and Ness and Strang seeking an immediate non-public session. Twice the motion to enter nonpublic session failed and twice the motion to allow unlimited public comment failed. Ness and Strang said they would agree to public comment if there was a time limit to the discussion, but the other commissioners would not relent on their position of allowing everyone who wanted to speak to do so.

“It’s the appearance of the chair that there is no consensus of this commission to move towards discussions, and accordingly, as the chair, I’m making a motion to adjourn this meeting,” Ness said.

Wood responded, “Like I said, hell will freeze over before this meeting will close.”

Pandemonium broke out and Rep. Richard Littlefield, R-Laconia, who is among the more conservative members of the Belknap County Delegation, approached Ness to ask him to agree to the public comment period. Rep. Mike Bordes, a fellow Republican from Laconia who has been a vocal supporter of Gunstock, shouted at him and yelled, “Resign, you guys, it’s what the people want!”

Ness asked Belknap County Sheriff Deputy Doug Trottier to come to the front of the room in the face of the unrest, and the meeting was able to resume.

The one item that the commissioners agreed upon was a motion by Dr. Strang to reimburse Dan Carbonneau for the paint he had purchased in preparation for the upcoming SoulFest event at Gunstock. There was unanimous vote in favor of that motion.

During further discussion of a public comment period, when Strang brought up “the ongoing legal investigation,” shouting again ensued, drowning out his comment, “from what we know preliminarily from the audit, we cannot go back to that situation.”

Strang serves as chair of the first audit committee the Gunstock Area Commission has had, and it was his decision to halt this year’s audit, upon the advice of the auditing firm, that led to the management’s outcry on June 22 in which the staff expressed their distress about the way the commission was treating them.

Wood objected to Strang’s comments, saying he did not have the podium, at which point the doctor grabbed his bag and walked out of the meeting. Ness soon followed.

For the next 45 minutes, Wood and Lambert – noting that they were in uncharted territory without a quorum to conduct business — allowed everyone who wished to speak to do so.

The unanimous sentiment was that Ness and Strang had to go, and they praised Wood and Lambert for having made the tough decision to publicly ask for their resignations.

The two commissioners said they would be asking the county delegation to remove Ness and Strang and seek replacements, but the timeline for a meeting is up to the chair, Rep. Mike Sylvia, R-Belmont, who moved to the state as part of the Free State Movement. It also will be up to the delegation to decide whether to act on the dismissal request.

Sylvia has said he expects to advertise for Kiedaisch’s replacement and would hold a meeting of the delegation no sooner than mid-September, unless other representatives ask for a meeting earlier than that.

During Tuesday’s meeting, the representatives present said they would be looking to meet as soon as possible.

After the meeting recessed, Lambert explained that the agenda for the nonpublic session was to have involved personnel, banking, and the audit.

“I believe they had some people in mind,” Lambert said, “and honestly, I don’t know when the agenda came. I was here in a meeting, actually, with several of the staff, so I had very little input other than we’ve been kind of going back and forth about the lack of a public session, so, obviously, we wanted that.”

He said the commission will have to follow through on some of those agenda items.

“The staff will continue to assist us as we move forward and try to fix this,” Lambert concluded.

Ness and Strang have not responded to requests for comment after the meeting.

The former president and general manager of Gunstock, Tom Day, said, “We were excited to see that the public has continued their support for what we feel is a problem with the commission. It was pretty demonstrative here today with the reaction to that, and hopefully, that they’re able to do what we’ve requested.”

He continued, “Whether they do or not, seven people gave up their livelihoods for what they believed in, and that’s honesty, integrity, and respect.”

Day added, “I’d like to acknowledge both Commissioner Wood and Commissioner Lambert. They’ve really stepped up, and they’ve been here working with the staff for five days since we left, we’ve had conversations, and the other two haven’t been.”

He said it is important to turn things around “because there’s a point where you can’t get over it. … We want to get it rolling and I want the delegation to understand that.”

The former chief finance officer, Cathy White, said, “It’s frightening what a few people can do to harm many. … I hope Gunstock can survive.”