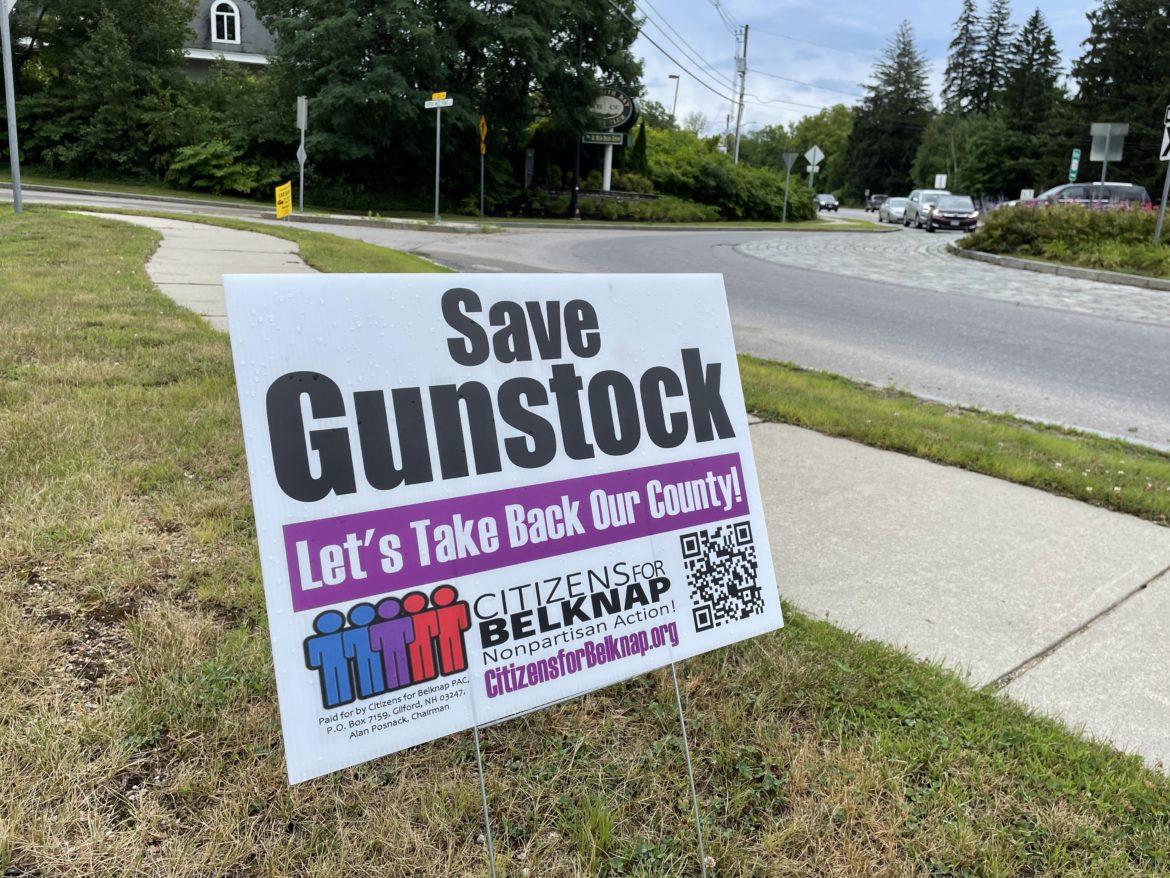 Signs went up in Belknap County over the weekend. This one was seen at the Meredith traffic rotary.

GILFORD – While Gunstock Recreation Area sat idle for the most part Monday, “Save Gunstock” signs were going up around the county urging residents to take action to save the county-owned facility from “political extremism.”

The zip lines, chairlifts, mountain coaster, ropes course, and other summer amenities were not in operation Monday after senior management and commissioner Gary Kiedaisch quit en masse during the July 20 meeting of the Gunstock Area Commission, whose members have been showing an interest in privatizing or leasing the county-owned operation.

Only the campground and operations for a private vendor, Bronco Off-Roaded – which provides vehicle adventures on the mountain – were open Monday.

There were a few Gunstock staffers who said they were staying on to protect the county’s valuable recreation assets and prepare for a youth festival in August which is still on after last week’s mass resignations.

Since last week’s meeting, about 15 to 20 percent of the full-time staff have also followed the lead of General Manager Tom Day and top management to resign and others are expected to do so soon, according to employees who said they were staying on for now.

The reaction by county residents has been largely supportive of the outgoing management and staff, they said.

Signs denouncing the Gunstock Area Commission and Belknap County delegation popped up over the weekend on the roadways across the county with QR codes directing readers to Citizens For Belknap, a political action committee.
“Let’s Take Back Our County!” the signs read.

The contact person for the organization, listed as Alan Posnack, said the reaction to the resignations has been “seismic. It’s a tidal wave of support. There has been nothing like it,” he said.
“They don’t have to be skiers,” to be supportive. “It’s a runaway delegation.”

The organization has been active since the fall of 2021, he said.
It has been building awareness mostly through letters to the editor and Posnack said that has largely been successful.

“Citizens for Belknap is a group of citizens from across the political spectrum with the common purpose of restoring reasonable, responsible, and representative government to our county. We are Republicans, we are Democrats, we are undeclared, we are united.
“We are fed up with runaway extremism in our County Delegation. We are fed up with representatives who do not represent – but speak for a tiny fraction of their constituents. And we are fed up with Free Staters and Libertarians who call themselves Republicans and are seeking to shrink the scope of state and local government,” according to the website.

The website claims that a “group of rogue legislators has taken over this Delegation….
“They are populated by Free Staters, whose beliefs and agendas are far outside the mainstream – – even supporting a bill for New Hampshire to secede from the U.S. They have engaged in across-the-board budget chopping for vital services across our county, including the Belknap Nursing Home and the Sheriff’s Department.
“They are working to control Gunstock by using their appointment authority to select Gunstock Commissioners who will do their bidding in dismantling Gunstock,” the website states.

Citizens for Belknap is a registered Political Action Committee that is seeking donations to underwrite advertising and mailings and to support candidates “from BOTH parties who support sensible county government, not extremist agendas.”

It calls on people to vote this fall for a change in the 18-member Belknap County Delegation “and rid our delegation of extremists.”

Posnack said the organization will soon be announcing candidates it does support and does not support for the primary which is just seven weeks away. Posnack said 15 of the 18 incumbents are running for re-election.
The entire delegation of 18 legislators are Republicans but “even the governor (who is a Republican) has said they are like wolves in sheep’s clothing and have placed four of their ‘plants on the five-member Gunstock Commission,'” he said, who support privatizing or leasing the ski area to the private sector despite the fact that the ski area and other recreation amenities have been operated as a successful business.

Posnack said Gunstock had its best financial year in its history with record attendance, and is considered one of the best-run ski areas in the nation.
He would not specify the amount of money raised to date and how that changed since the decision last week by the management to resign but he said “donations are coming in hot and heavy. They are calling all day, saying ‘what can I do?'”
The organization’s website is https://www.citizensforbelknap.org/