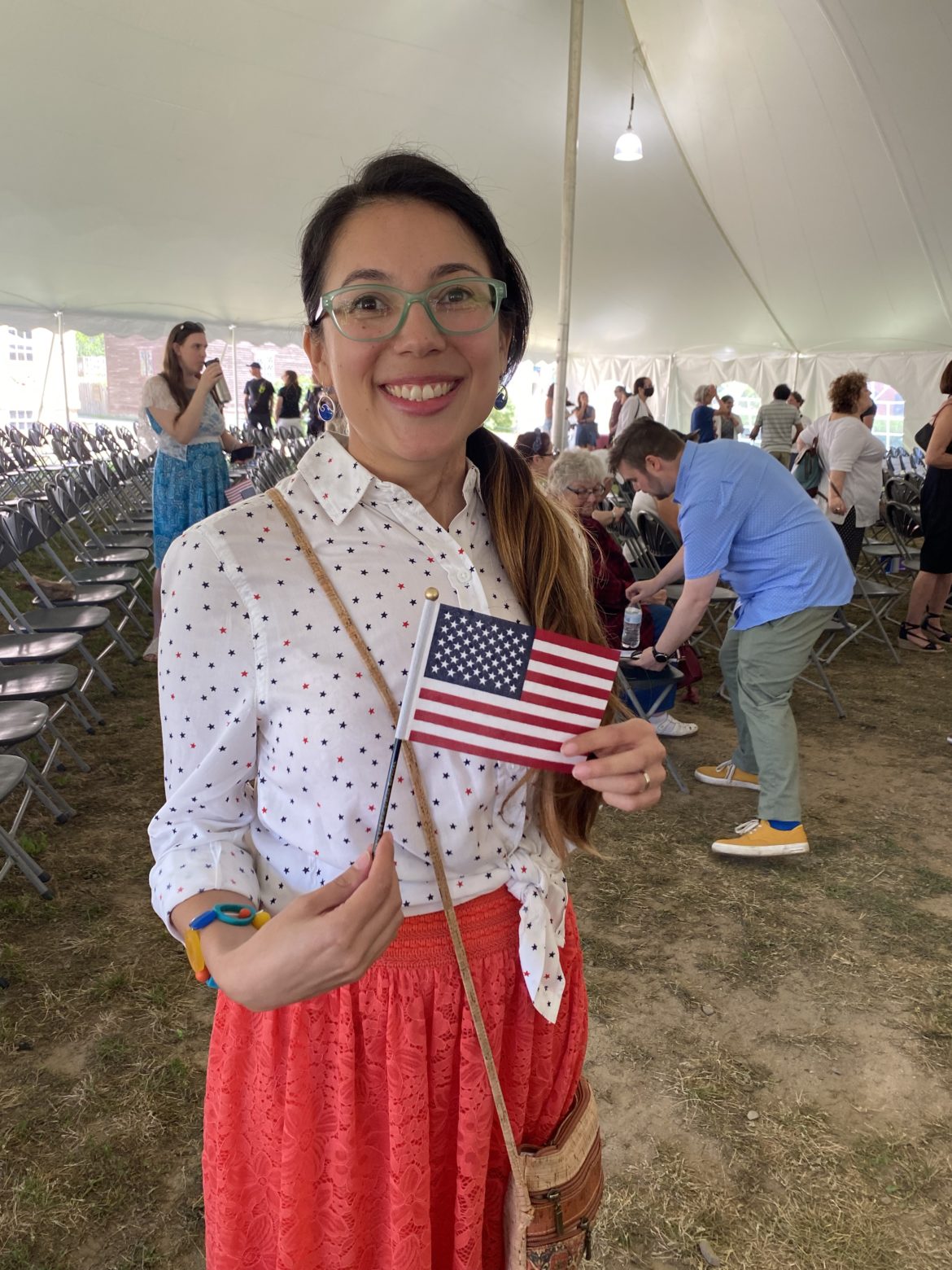 July Rubiano, new citizen from Colombia, poses with the American flag at the Naturalization Ceremony July 4, 2022, at Strawbery Banke in Portsmouth.

Today’s Naturalization Ceremony in Portsmouth’s historic Strawbery Banke was the place to be – where pomp wore red, white and blue, where circumstance carried American flags, where 72 citizens from 32 countries became America’s newest citizens.

As becoming a new citizen requires a court procedure, U.S. District Court Chief Judge Honorable Landya B. McCafferty was joined by the Honorable James Bassett of the New Hampshire Supreme Court to preside.

Citizens’ countries were announced by Judge McCafferty and included every corner of the globe: Haiti to Vietnam, Canada to France, Cuba to China, Congo to Iran.

The patriotic feel knew no boundaries, however. All languages spoke the language of independence, of freedom, of welcome to America.

Judge Bassett shared about his own grandfather immigrating from Denmark, speaking no English, and who went on to be a successful home builder in Connecticut, never dreaming his grandson would become a Supreme Court judge.

Judge McCafferty, when introducing Congressman Chris Pappas, mentioned that it was the Pappas restaurant where she and her husband had their first date.  Congressman Pappas segued back to immigration in sharing that his family business was founded by his own immigrant family early last century.

Finally, U.S. Sen. Jeanne Shaheen, D-NH, looked over the 72 faces of hope from 32 different countries and captured the essence of a day unlike any other:

“I see the sea of opportunity.  You make this country stronger.  Thank you for wanting to be an American.”

And, as it was a day for new citizens, below are moments from a day of red, white, blue and the freshness of a birthday, a new beginning, a new country, a new hope.

Jean-Gardy Louisdor, 27, from Haiti, smiled and announced, “I am very excited to be here on America’s birthday – it doesn’t get more exciting than this.”

New Citizen Florian Gavinaitis, 35, of France, felt “lots of emotions, privilege, felt very grateful.”  Gavinaitis had a special cheering section and celebrated his family, his friends who got him to this point in life.