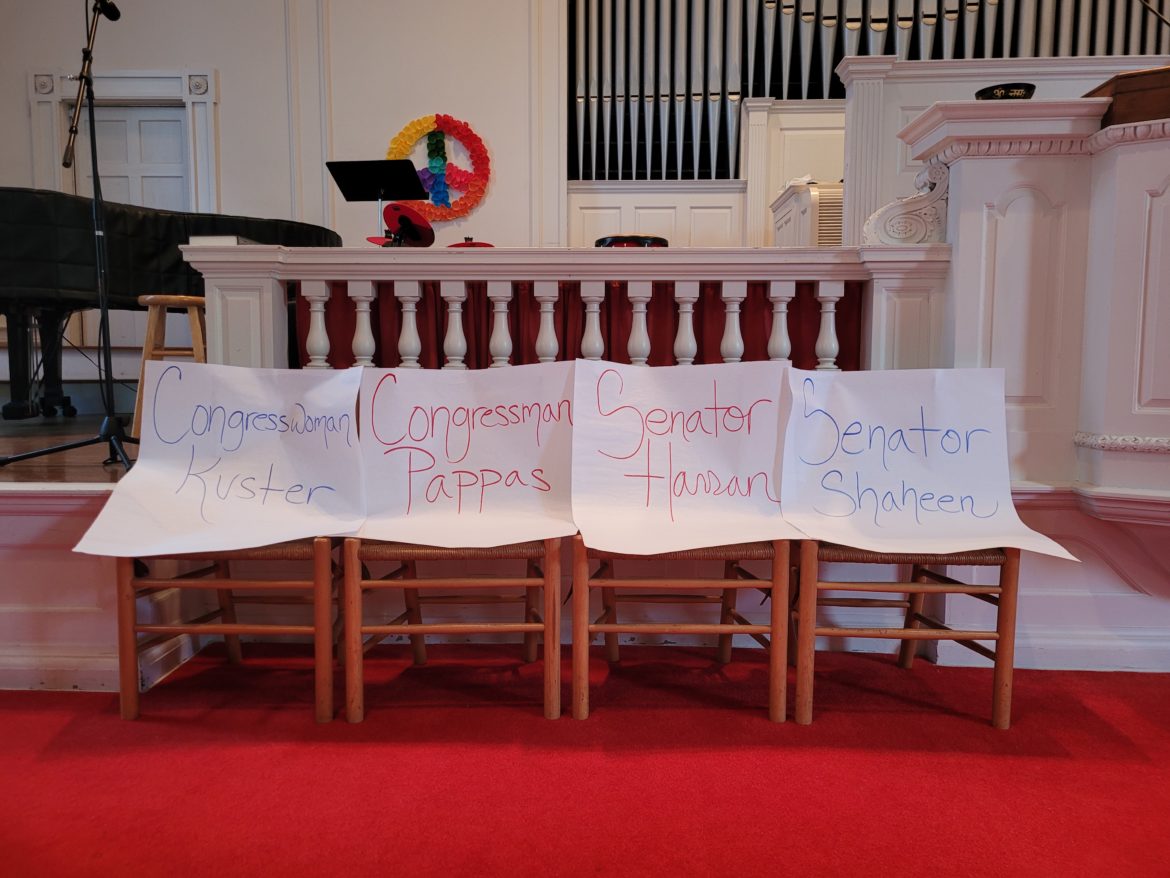 At the Nashua Unitarian Church for the Faith Forum on Immigration, the state’s congressional delegation, all Democrats, had all been invited but were all were no-shows (though Senator Shaheen did send two staff members well known for attention to immigrants).

NASHUA—People began filing into the Nashua Unitarian Church for the Faith Forum on Immigration a little before 7 p.m. on June 29.  Black, brown, white, young, old, and in between, mostly masked, about 80 people spread out in the sanctuary’s wooden pews.

A few dozen more joined on Zoom.  Four empty chairs at the front of the room were labeled “Senator Hassan,” “Senator Shaheen,” “Congressman Pappas,” and “Congresswoman Kuster.”  The state’s congressional delegation, all Democrats, had all been invited; all were no-shows (though Senator Shaheen did send two staff members well known for attention to immigrants).  (After this story was published,  Rep. Kuster’s communications director said one of their staff was watching on Zoom.)

The absence of the federal officials “makes me sad,” said the Rev. Heidi Carrington Heath of the NH Council of Churches, but it didn’t have much impact on the forum, which featured testimonies and reflections from immigrants, several of whom are themselves members of the clergy.

For the sponsoring groups, it’s fair to say that every day is an important day to listen to the voices of immigrants.  But this forum’s timing had everything to do with Maggie Hassan’s much-publicized April 11 trip to the US-Mexico border, where the state’s junior Senator called for more funding of the US Border Patrol.  She also announced support for legislation to maintain a Trump-era policy, known as Title 42, which uses the COVID pandemic as a pretext to block entry of people fleeing violence in Latin American, African, and Caribbean countries.

Congressman Chris Pappas has endorsed corresponding legislation in the House of Representatives.

Had members of Congress been present, they would have heard multiple stories about what Eva Castillo of the NH Alliance for Immigrants and Refugees called “a dysfunctional system.”  One speaker, a Central American immigrant living in Nashua, described how her home was placed under surveillance by immigration agents such that family members were afraid to go out even to get food.  When her parents were dying, she was unable to visit them.  Her son is unable to be with his own children, she said.

Mark, who came to America from Africa and lives in the Seacoast, said he was imprisoned for 2 years after he sought asylum.

Margarita Garcia, a Nashua pastor, described people living in the “shadows” for lack of documents which allow them to work, drive, and seek medical help.

The testimony was painful to hear, but not new.  As Grace Kindeke of the American Friends Service Committee (AFSC) said, enforcement of immigration law tears apart black and brown families.  The stories the immigrants told provide “the clearest evidence of the system that needs to transform, a system that needs to change, and a way of thinking that needs to shift,” according to Kindeke, who said she spent 27 years in an undocumented status.

Christine Kindeke, a Manchester teacher who immigrated from the Democratic Republic of Congo, described a religious experience she had at the age of 4 and said her faith has made it possible to cast out fear.  “I refuse to be scared, I refuse to be intimidated,” she said.

The forum heard, too, from Rabbi Jonathan Spira-Savett of Nashua’s Temple Beth Abraham and Meftah Mehmood of the Islamic Society of Greater Nashua, both of whom talked about the importance to their faith traditions of welcoming immigrants.

Pastor Margarita said that God can touch the hearts and minds of everyone, including the president, senators, and members of the cabinet.  “Touch them, God, because we know that you can do everything,” she prayed.

Following the forum, Pastor Margarita again stressed her concerns about people forced to live “in the shadows” because of their undocumented status.  “They should be given the opportunity, as immigrants, to become American citizens,” she said.

But progress toward such reforms appears to be stalled, with current legislative and court fights focused on the large number of migrants fleeing ongoing violence in countries such as Haiti, Cameroon, Honduras, and Mexico.  Even the popular Deferred Action for Childhood Arrivals program is under legal threat following a Texas federal court ruling a year ago that the program is illegal.  Legislation to enable millions of undocumented immigrants to normalize their status is going nowhere, and election season rhetoric is once again amplifying the voices of those who demonize migrants.

Rev. Heath of the NH Council of Churches, which sponsored the forum along with the AFSC and the Granite State Organizing Project, said she hopes the Congressional delegation will “feel provoked and compelled to work harder on behalf of our immigrant neighbors here in New Hampshire, and to perhaps take a second look at their own stances on policy that may be harmful in ways they didn’t understand or realize before.”

Mark, the asylum seeker, spoke of the power of miracles, as did Christine Kindeke.  The Rev. Sandra Pontoh of the Maranatha Indonesian United Church of Christ in Madbury, who appeared at the forum via Zoom, has often described the dynamics which enabled members of her community to remain in the country as a miracle.   Perhaps a political miracle is what is needed now.

Eva Castillo appeared to be a bit more cynical.  “I’m tired of praying,” said the state’s best known Latina advocate for immigrants.  The Manchester resident publicly dissociated from the Democratic Party in April after Senator Hassan and Representative Pappas, both seeking re-election, called for continuation of Trump-era policies which exclude Latin American asylum seekers.  “Prayers without action don’t give us anything.  It might give us some peace of mind, peace in our soul, but without action nothing is going to change,” she said.

In addition to prayer, Castillo urged those who can to use their votes to hold politicians’ feet to the fire.  “We need to vote for people that really are going to help us in this community and hold them accountable,” she urged.