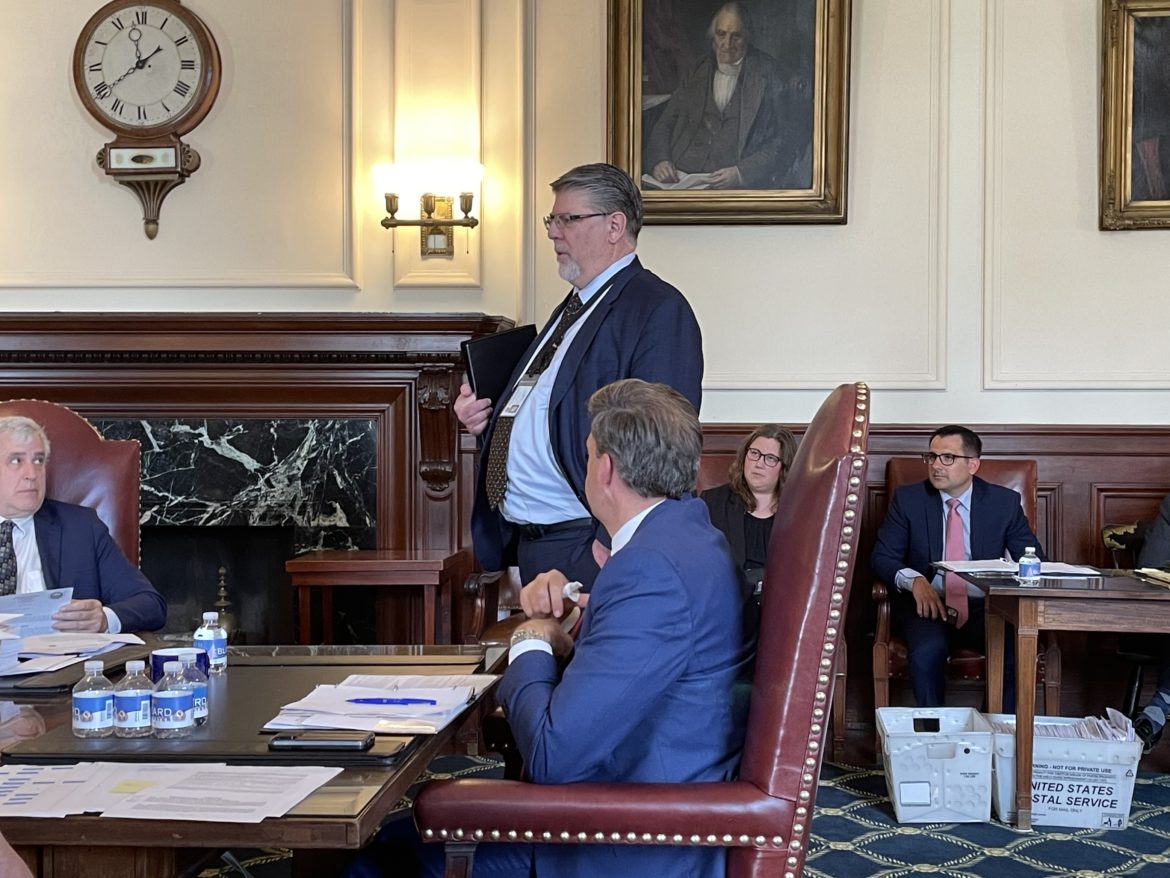 CONCORD – Many New Hampshire consumers will be shocked by their next electric bill. They will see pedal-to-the-metal construction work on a new exit ramp on Interstate 93 in Londonderry and Derry and $50 million in new infrastructure improvements at all 10 county nursing homes to protect seniors from illnesses like COVID-19.

These issues and contracts were before the state’s Executive Council and Gov. Chris Sununu on Wednesday.

Gatsas said the commission was just “rubber-stamping” what the utility companies want rather than standing up for the consumers.

Others, including the state’s consumer advocate, said the rate hike is a pass-through to customers, which has just been approved for Liberty Utilities and is likely to be approved for Eversource effective Aug. 1.
“Councilor Gatsas is understandably upset,” said Donald M. Kreis, the state’s consumer advocate, following the meeting of the Executive Council.

“But there is no basis for the PUC to reject that rate hike…It’s a pass-through,” and the utilities are not making any money on it, he noted.

Dr. Tom Sherman of Rye, who is running as a Democrat against Sununu, called it a “a policy failure years in the making. Chris Sununu has repeatedly vetoed bipartisan clean energy initiatives that would shift our reliance off of fossil fuels and increase our investments in clean energy.”

Sherman said the PUC Commissioners were all appointed by Sununu, and “have the option under the public interest standard of modifying, denying, or approving a requested rate increase. The rate increases are driven by the projected high costs of natural gas, which New Hampshire relies heavily on because of its failure to meaningfully invest in renewable energy options.

“Sununu vetoed more than a dozen mostly bipartisan bills that would have put us in a much better position to keep these costs lower. Sununu’s appointees should have turned down this extreme rate hike for taxpayers,” Sherman said.

Executive Councilor Cinde Warmington, D-Concord, said that the state can create its own program to help low-income consumers, similar to the federal low-income heating program.

On a positive note, the council learned from Jared Chicoine, commissioner of the Department of Energy, that the state still has all of its LIHEAP funds from last year to use for this coming winter meaning double the amount will be available, as the state used federal American Rescue Plan Act money to help low-income consumers out with their heating bills this past winter.

Warmington noted this all comes at a time when the energy companies are making record profits while consumers are suffering from inflation.

Gatsas noted that same fact when consumers are facing “everything else.”
Goldner said a typical bill of $100 will probably go from $150 to $160.

Gatsas asked Sununu if they could open the parameters for LIHEAP heating.

“I believe we follow the eligibility guidelines and we go to the max,” Sununu said.
This translates to giving financial help to families of four with a combined income of about $75,000 or less.

Sununu said, “we would have to set up our own state program and get a look at real numbers, how many people are eligible.”

The approval of these funds is contingent on approval by the Legislative Fiscal Committee which meets on Friday to consider the contract.
Applications could be available in early July.
Councilor Joe Kenney, R-Wakefield, asked about how the distribution of funds would occur and wanted to ensure that nursing homes in his district would be considered.

It will be rolled out in two phases, the first for immediate and ready-to-go requests and the second traunch of funds for more long-term needs.

“This fund will help ensure our county nursing homes have the infrastructure and capabilities to keep residents safe,” said Sununu in a statement following the vote.

“By responsibly using these one-time funds for one-time investments, we are able to provide benefits to the citizens of New Hampshire for decades to come.”

Warmington said she was particularly pleased with the design of the program in two phases. She said she has been working to ensure that Sullivan County Nursing Home gets the help it needs to renovate.

A PIER FOR HAMPTON?
The council authorized what could be the first steps toward the construction of a seacoast pier at Hampton.

The move allows the Hampton Beach Area Commission to enter into a sole-source contract with GEI Consultants, Inc., in the amount of $150,000 to study the feasibility and impacts of constructing and maintaining a pier directly south of Boar’s Head in the Town of Hampton.

Gatsas said he was hoping to see administrative fees lower but was happy to see the state was able to bring some of the costs down.

ROUTE 93 EXIT 4A CONTRACT APPROVED
The Transportation Department presented a request for the council to approve $45.5 million in federal funds to construct a new exit on Route 93 in the southern portion of the state. It will be called Exit 4A. It will be located approximately 1.2 miles north of Exit 4 and 2.25 miles south of Exit 5.

It was unanimously approved. Weaver Brothers Construction Company, Inc. of Bow had the lowest of three bids for the interchange, ramps, and easterly connector in Londonderry and Derry.

Work will begin tomorrow, Transportation Commissioner Victoria Sheehan said.
“Good work,” said Gatsas, who has been pushing to see this project complete.
“Done in a couple of months?” he said with a chuckle.

This is the first in a series of construction projects for the area. It begins at I-93 and extends easterly through a new connector road (Old Rum Trail) where it will tie into the existing street system in Derry, including improvements to Folsom Road and Tsienneto Road, terminating with improvements on NH Route 102.

“The project is needed to reduce congestion, improve safety, reduce traffic on local roads and promote economic vitality in Derry and Londonderry,” the contract reads.
It is part of the state’s 10-year highway plan.
Although the contract is 9.2 percent or $3.8 million over the department estimates the low bid of three received is felt to be reasonable for the work involved. To put it out to bid would result in higher prices and a delay.

“The Department considers it to be in the best interest of the State to accept this bid to accomplish these needed repairs,” wrote Commissioner Sheehan.

THREE JUDICIAL NOMINATIONS
Sununu has nominated three as justices to the New Hampshire Circuit Court.
Sandra Cabrera of Columbia, Justin Hersh of Goshen and Joseph Tessier of Milford are all being nominated and will receive a public hearing before the council prior to a vote on confirmation.
One would likely be held on June 29 when the Executive Council meets next.

ON TO THE ‘ROAD SHOW’….
Every summer, the Executive Council heads out of their chambers in the State House to each of the five council districts and one chosen by the governor to hold regular meetings.
They will begin in July.

The meetings are open to the public and often involve commendation of local individuals and information sharing on local projects which have a statewide impact.
The locations have not all been announced but they will be posted on the governor’s website and that of the Executive Council.

JUNE IS OUTDOORS MONTH
A proclamation for June as Outdoor Month was read by the governor with members of the state Parks and Natural Resources officials.
New Hampshire’s natural resources are critical to the state’s quality of life, economy, and heritage, Sununu said.

AG’s DECISION NOT TO CHARGE PROTESTERS
Councilor Warmington wanted to tell Attorney General John Formella, who was not in attendance at the meeting, that his decision not to prosecute protesters of a September council meeting which forced it to be canceled impacted “many people in this room who felt threatened.”

Formella said though he felt crimes were committed that day he did not believe he could ultimately prove that in a court of law.
Warmington said she did not want the decision to be interpreted in any way that the council would be threatened into not doing its business.
She was told state police are proceeding with charges from the October meeting in which some of the same protesters were arrested and said she hoped after that matter was completed that the Attorney General would release more information on the investigation and his decision to not charge.