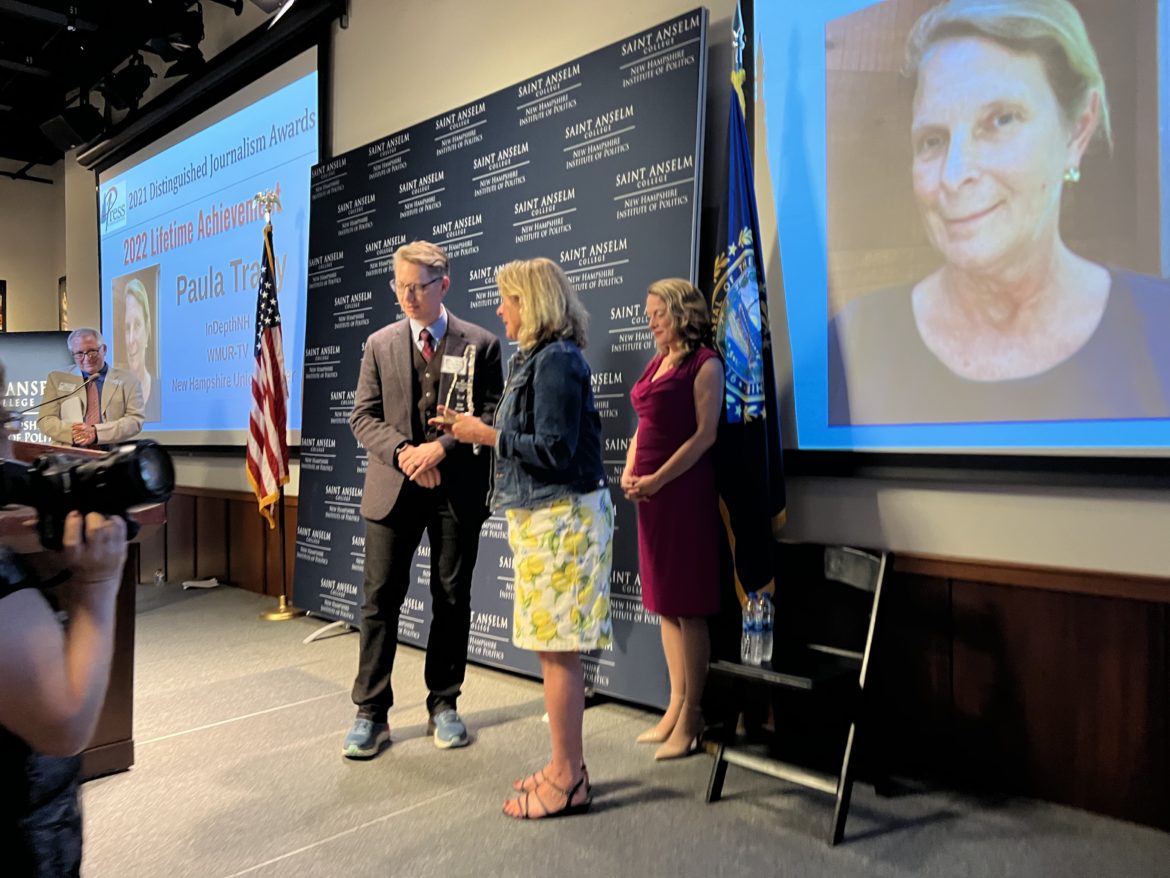 InDepthNH.org's Paula Tracy accepts the award for 2022 Lifetime Achievement from the New Hampshire Press Association Thursday at the awards banquet at the Institute of Politics at Saint Anselm College in Manchester. From left are the Union Leader's Brendan McQuaid, president of the press association, and presenter Kimberley Haas. At far left is Mike Cote of the Union Leader, who was also a presenter.

InDepthNH.org’s senior reporter, Paula Tracy, received numerous awards, including the 2022 Lifetime Achievement Award. Haas introduced Paula by sharing that she has a special passion for “telling important stories of her home state.”  Paula worked for the Union Leader for 25 years before coming to InDepthNH.org in 2018. Her IHOP, In The Hallways of Power video series, shows the depth of her compassion for reporting the news by talking every week with people from around New Hampshire who come to the State House and Legislative Office Building in Concord about why they show up at the State House and voice their opinion. Paula said about the award, “This is really the audience I would want to be respected by; people who do this job on a daily basis and know how hard it is.” Paula wore a dress with a lemon print for the occasion. She later remarked that it was deliberate that what she and other reporters do is make lemonade out of lemons in this demanding job.

InDepthNH’s New Hampshire State House reporter, Garry Rayno, was honored with second place in the 2022 Journalist of the Year award. First place went to Michael Cousineau of the Union Leader and third place to Mark Hayward of the Union Leader. In addition, longtime political reporter and columnist John DiStaso, who passed away at 68, was remembered and honored in an In Memoriam video.

One of the most important categories, the First Amendment award, seeks to make the government accountable and remove the veil of secrecy the public faces with so many records that should be made public. Nancy West, the executive editor of InDepthNH.org, was awarded the first place First Amendment award in the small daily division. A frequent contributor to InDepthNH.org, Jeff Hastings of Frame of Mind Photo, was named the Photographer of the Year, combining all of the news organizations.

The complete list of winners can be viewed here: https://pressnh.org/wp-content/uploads/2022/06/Complete-List-of-2021-Winners.pdf