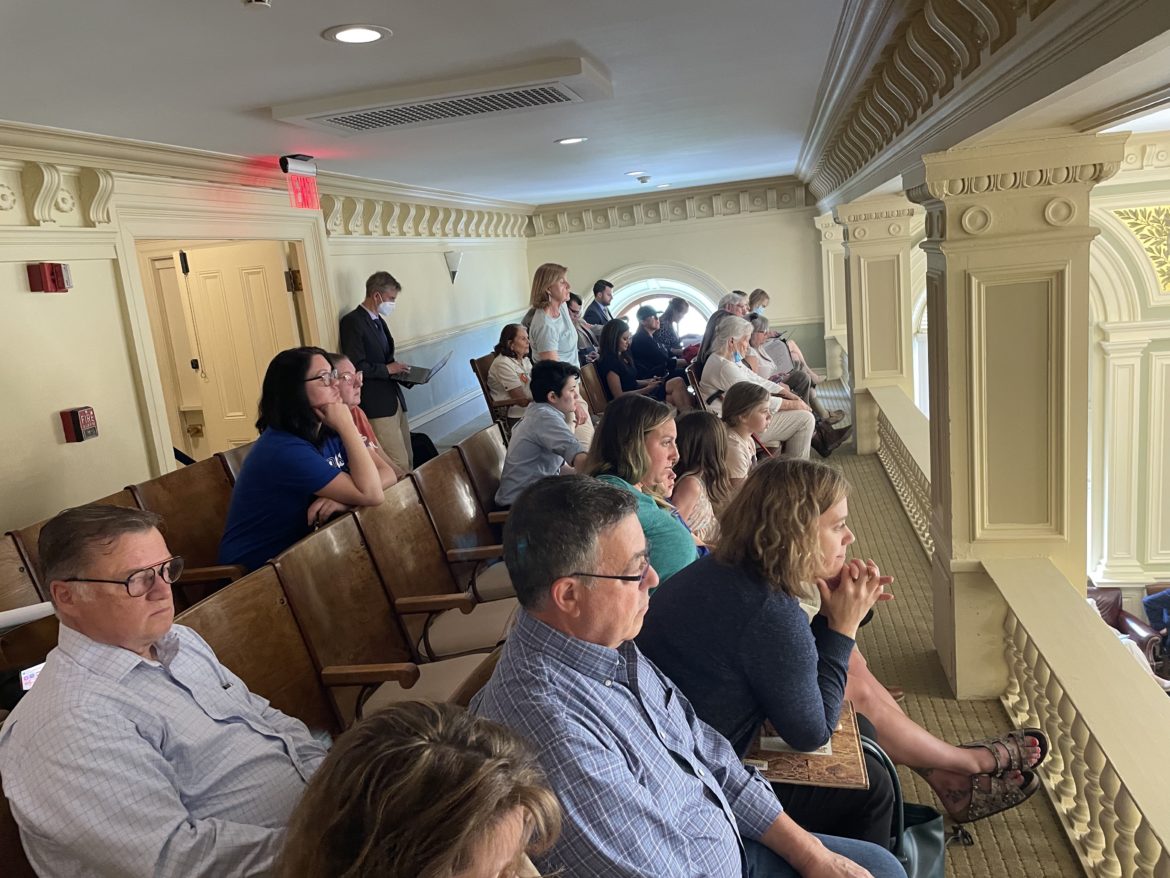 Member of the public watch the Senate work Thursday from the gallery.

CONCORD – Republicans and Democrats touted their successes of the legislative session that just ended Thursday as both sides look toward the election season this fall while wondering which bills will be targeted for Gov. Chris Sununu’s veto pen.

Sununu on Friday signed 29 bills into law and vetoed four, including HB 1625, a bill repealing the prohibition on entering or remaining on a public sidewalk adjacent to a reproductive health-care facility.

“Patients should not be intimidated or harassed while seeking reproductive health care, cancer screenings, and other critical health care needs,” Simpson said.

On Friday, Sununu also signed HB 1609 into law providing an exception in the Republican 24-week abortion ban for fatal fetal anomalies that removes the requirement that all individuals seeking abortion care must undergo an ultrasound at every stage of pregnancy.

“Because of the sustained advocacy of Granite Staters and the hard work of a unified Democratic caucus in both the House and Senate, we are in the first, but certainly not last, steps in righting the wrongs created by ‘Sununu’s Abortion Ban’ enacted by Governor Sununu and the Republican legislative majorities last year.  HB 1609 more clearly defines the ultrasound mandate and creates a fatal fetal anomaly exemption,” Weber said.

In his veto messages he said the bill is not in the best interest of the citizens of the state.

The original suit over the congressional districts was filed in Hillsborough Superior Court South, but the Supreme Court took over jurisdiction due to the time constraints until the filing period for candidates begins Wednesday. The final period ends June 10.

In June of 2021, Gov. Sununu struck a deal with House leadership to secure the votes of N.H. House Freedom Caucus members for the budget in exchange for his support of additional emergency powers reforms, Manuse said.

This year, the House and Senate quickly passed these agreed-to reforms in HB 275, which would have codified that the state government is a Constitutional Republic by default, and that both the House and Senate would need to vote to continue a State of Emergency or it should automatically end, Manuse said.

“The governor, going back on his verbal and written word, vetoed this bill today, despite the fact that it passes Constitutional muster and was the exact language discussed with him last year,” Manuse said.

In his veto message, Sununu said: “It is irresponsible to further bind a future Governor’s ability to address and respond in a crisis, especially when the Legislature already has the power to suspend a State of Emergency at anytime.”

Sununu also took heat from the lawyer representing victims at the Youth Development Center for signing HB 1677, relative to the administration and settlement of claims of abuse at YDC.

David Vicinanzo, counsel to the victims and former First Assistant US Attorney, said:
“The victims know this bill is not victim-friendly and is intended to benefit the state, not them. We will continue to fight every day to change the abusive way the state treats its vulnerable children, and for true justice for the many hundreds of kids grievously harmed by sexual, physical and emotional abuse over decades at the hands of the state.
“In a sure sign that the state is not  proud of this deceptive bill, it was signed at 5 p.m. on the Friday of a holiday weekend. If it was a good bill,  it would have been signed at a press conference when the press was not on holiday,” Vicinanzo said.

Every seat – including the governor, the 400-member House, the 24-member Senate, and the five-member Executive Council – is up for grabs this November.

Senate President Morse, R-Salem, in a statement after the close of the 2022 session, said promises were kept during the session.

“Back in January, we promised to further protect our freedoms and to strengthen the economy by helping our Main Street businesses and working families. I’m proud to say that with Republican leadership, and sound fiscal management, we accomplished those things and more.

Sen. Jeb Bradley, R-Wolfeboro, the majority leader, said Republicans can look back on this past session with pride.
“We began 2022 with a strong, conservative agenda that built on many of the important gains we made in 2021. Our successes over the last six months are the direct result of staying focused on our priorities and being able to take advantage of the surplus we created by responsible tax and budget policies.”

Democrats did not see it that way and are focusing now on electing members to retake the majorities they held two years ago.

State Rep. Matt Wilhelm, D-Manchester, said the Republicans in the legislature are completely out of step on just about every issue with the public.
“It is something I believe they are going to have to pay for politically in November,” he said during a virtual press conference Friday.
Wilhelm said attacks on access to reproductive health care is at the top of the agenda.
He said Democrats worked hard to pull back on aspects of the new 24-week abortion ban.

“We know the truth as (Roe v. Wade) is overturned any day now, Republicans will ban abortion in New Hampshire,” he said, “as soon as they can.”
He noted the secession vote, which only got a handful of votes for the state to separate from the United States, was backed by Republicans in his committee.
“It was embarrassing that the bill was introduced in the first place,” Wilhelm said.

Almost equally as unpopular as the Republicans’ stance on reproductive rights, Wilhelm said, is the “deeply unpopular war on teachers” and noted Democrats were extremely proud of defeating the Parental Bill of Rights or what he called the “New Hampshire Don’t say ‘gay’ bill,” which lost in the House Thursday by five votes.
Wilhelm said Democrats were grateful for the leadership of Rep. Sue Mullen, D-Bedford, and her speech on the floor about her experience as a school counselor.
Democrats are amassing a war chest, he said, noting there has been a 250 percent increase in donations from this time in the last election cycle.

“We are fired up,” he said.
House Minority Leader David Cote, D-Nashua said the fact that members of the House “booed” Rep. Debra Altschiller, D-Stratham, who asked but did not succeed in suspending the rules to bring up criminal background checks for weapons Thursday following the mass killings at a Texas elementary school showed that Republicans are out of step with the people of the state.

Cote said there will likely be gun safety legislation introduced next year by Democrats but no decision has yet been made on what to get behind.

The following is a list of the bills Gov. Sununu signed and vetoed Friday.

See below for a list of bills Gov. Sununu vetoed. Veto messages are hyperlinked below:

See below for the list of 29 bills Gov. Sununu signed Friday: