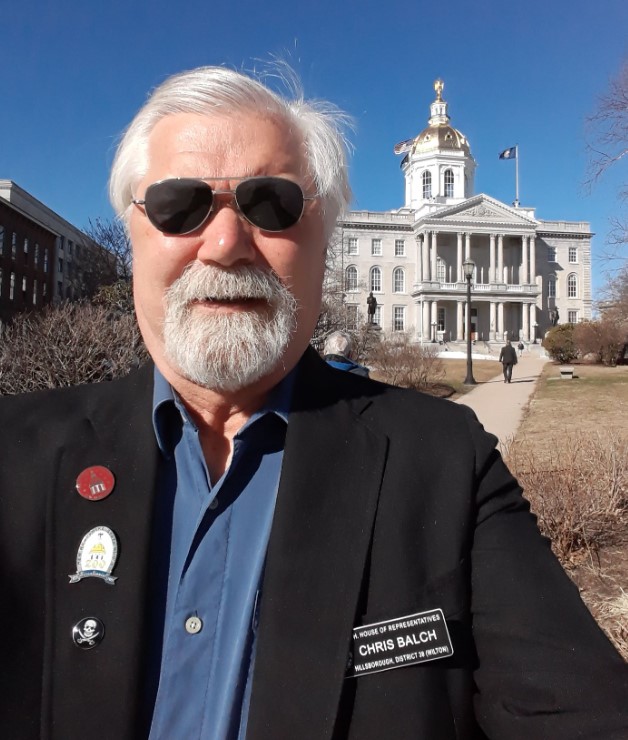 Chris Balch is pictured when he was still a state representative.

Former state representative Chris Balch has been charged with spiking trees by New Hampshire Forests and Lands, a class B misdemeanor. Two of the complaints involve the Heald Tract and two the Russell-Abbott State Forest. His case will be heard in Milford District Court.

Balch was also arrested Oct. 3, 2021 for allegedly blocking the driveway of Merrimack Station in Bow a part of a No Coal, No Gas protest. That case is pending.

As many know, I’ve written several recent LTEs and an opinion piece, all based on
science that challenges current forest management practices, especially during a
climate crisis.

Of course, I cannot comment specifically on any cases pending against me, but I will
address a few things in the InDepthNH article entitled: “Former State Rep Charged in
‘Eco-Terrorism’ Case.”

I would first note that if a person were to spike trees, and also put warning signs on the
trees (perhaps quite a bit more securely attached than the article suggests), then that
person would obviously be making more of a non-violent, direct action statement as
opposed to an act of “terrorism.”

Direct action is aimed at bringing attention to, slowing, or potentially even halting future
events that are perceived as harmful or destructive.

This is very different than the actions of terrorists. Without giving any warning, terrorists
act against other people, often by threatening or taking lives. Confusing direct action
that is aimed at preventing destruction mis-defines the true meaning of the word
terrorism – perhaps to purposefully associate activists with terrorists, and therefore cast
them in a disparaging light.

The article states: ”As a legislator Balch pushed for a ban on single-use plastics, a bill to
restrict the use of plastic straws, a regional greenhouse gas initiative cap and trade
program, and an official Climate Awareness Day proclamation, among other efforts.”

Among those “other efforts” are 23 more sponsored and co-sponsored bills for banning
styrofoam, eliminating the use of toxic pesticides on school and municipal playgrounds,
teaching about climate science and climate change in schools, a carbon cash-back fee
for polluting industries, raising the net metering cap to allow private and municipal
generation of energy by solar, hydro, or wind, protecting the voting rights of college
students, and sixteen more “other efforts” all in a similar vein.

Though some of my bills were adopted by other states, publicized nationally by the Associated Press, few passed the NH House and Senate, and none made it past the Gov’s record veto year.

Also from the article: ”The state, as well as the Society for the Protection of New
Hampshire Forests, will harvest wood from forests in order to fund operations as well as
manage the land and create better conditions for wildlife, Savage said.”

The SPNHF’s definition of ‘wildlife’ is suspect. Wildlife biologists generally agree there
are somewhere around 60,000 species of living things in a New England forest.
Mammals and birds, which make up the general definition of ‘wildlife’ by forest
1 https://www.concordmonitor.com/My-Turn-Forest-management-science-46287666
2 https://apnews.com/article/11777d5553b920e5fc91016cf1deb104
managers, total about 300 species, or fewer than 00.5% of the total living community.
The other 99.5% of the living community is either “harvested” or collaterally destroyed.
That huge percentage is entirely ignored in forest management plans.

And finally: “‘It seems somewhat hypocritical to me to sit in your wooden house, print a
sign on paper that comes from wood, and then go into a forest and drive spikes into
trees and say it’s done for the trees,’ Savage said.”

People routinely drive fossil fueled powered vehicles to rallies and events protesting
fossil fuels. It is impractical to ride a bicycle or horse longer distances and those who
seek to make a positive change in the world must use the tools available to do so. This
is not hypocrisy. Rather, it is necessity, and those failing to preserve our natural world by
their actions and inactions create that necessity.

I would add that what really is hypocritical is using forests to generate profits while
proclaiming to the public that you are “protecting them” and improving conditions for
“wildlife.”

There is quite a bit more I could say here, but my legal situation precludes me being
able to address every concern.

I leave you with this Edward Abbey quote: “It is not enough to understand the natural
world; the point is to defend and preserve it. Sentiment without action is the ruin of the
soul.”
Chris Balch
Wilton
May 25th, 2022