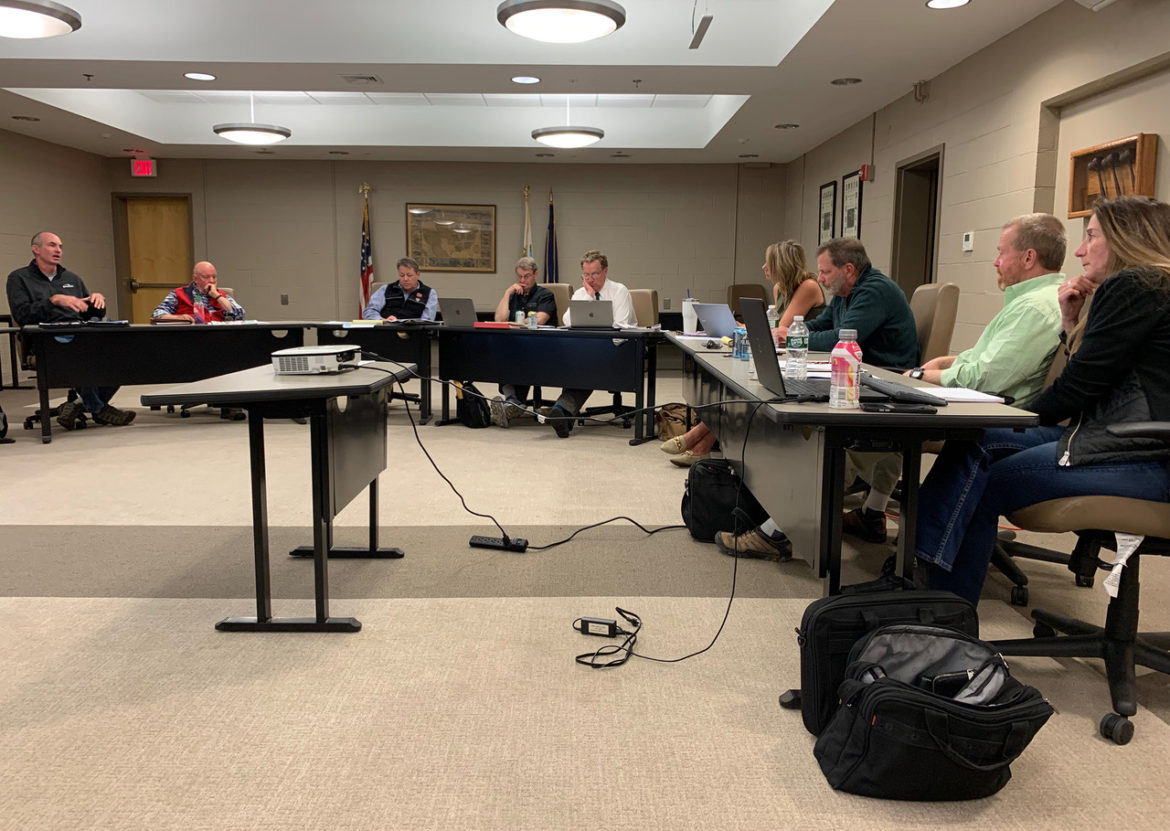 LACONIA — Despite assurances that the newest members of the Gunstock Area Commission support the county-owned recreation area, their approach to oversight of the operation brought out continued animus among its members and defensive reactions from the administration during a five-hour meeting Wednesday night.

Former Chair Gary Kiedaisch is now a minority voice on the five-member commission and his assertion that the GAC should operate as a board of directors met with stern responses from current Chair Peter Ness and his vice-chair, Dr. David Strang.

“It’s a commonly known rule that a board of directors has noses in and fingers out,” said Kiedaisch. “If we start reviewing expenses and authorizing payments, this body here, we’re going to slow it down.”

“That’s exactly what this commission is supposed to do, is slowing things down when things are getting out of control,” Strang responded. “In the last fiscal year, while you were chairman, we spent over $110,000 on legal expenses, and not once did those bills come before this commission.”

Ness added, “I would like to disabuse Commissioner Kiedaisch of the notion that this body is a board of directors. Gunstock Area Commission is a body politic which is a subset or whatever you would like to call it of Belknap County, which is part of the state of New Hampshire, and it is not a corporation.”

The discussion arose from a motion by Commissioner Jade Wood to ask that, going forward, all legal bills be included in the monthly packet for the commission’s review.

The GAC has engaged Peter Callaghan of the PretiFlaherty law firm to review the history of a dispute that led the commission to sue the Belknap County Convention for considering the removal of Kiedaisch and two former commissioners — the action that accrued more than $110,000 in legal costs for Gunstock and around $50,000 in legal expenses for the County Delegation to defend against the suit. The delegation has asked the GAC to consider reimbursing its legal expenses.

Kiedaisch said he had consulted private attorneys about the delegation’s request and asserted, “Nobody’s been able to show me any mechanism that would obligate or require, or law that would require the GAC to pay the Belknap County Delegation’s legal bills.”

He did join the others for a unanimous vote in support of Wood’s motion for a monthly review of Gunstock’s legal bills.

Wood later offered another successful motion to allow only Ness, as chair, to deal with Callaghan in his review of the events leading to the lawsuit. She said she wanted to avoid additional legal costs from the attorney having to respond to several people, as had occurred during the lawsuit.

Kiedaisch did not object but cautioned that Ness should keep the other commissioners apprised of his discussions with Callaghan.

“We don’t want to trigger another lawsuit,” he said. “We want to make certain that whatever the conclusions are that it encompasses all the information and all the facts are put there.”

Ness is a central figure in that review. His advocacy for changes in the ski school three years ago led the other commissioners at the time to seek his ouster, claiming abusive behavior and an attempt to sell his own software to Gunstock. Ness denied the charges and said there was no solicitation or sale of his software. When the other commissioners asked the county delegation to remove Ness, the representatives found insufficient evidence to do so, then followed up by contemplating the removal of the commissioners who brought the charges — including Kiedaisch.

So it was that, when Ness again brought up goals for the ski school at Wednesday’s meeting, Kiedaisch said, “I’m not surprised, but I’m shocked. Two years ago, as chairman, I gave you an audience to present a very comprehensive [presentation] on ski school management and your expertise.”

He went on to say the goals Ness presented were the same ones he discussed then, but since that time, Gunstock has hired “one of the top ski school directors in the country.” Peter Weber is the recipient of the 2016 Einar Aas Award for Excellence in Snowsports School Management, and Kiedaisch said that, when the commission hired him, “we said, ‘Let’s see how the horses run,’ and from what I can see, and I think the public also would agree, the horses are running pretty good.”

Ness interrupted Kiedaisch to give him “30 seconds” to make his point.

“You spoke for 20 minutes,” Kiedaisch objected. When Ness repeated “30 seconds,” Kiedaisch asked, “Do you take that from [Delegation Chair Mike] Sylvia? Is that the way you do it now?”

Gunstock President Tom Day asked Chief Financial Officer Cathy White to discuss the resort’s revenue growth since Weber has been there, and commented that it would have been better for Ness to approach him rather than bringing up new goals at a public meeting.

“I’ve got plenty of things that I’d like to talk about. I do think this should have happened between you, me, Jane, and Webbie in a meeting,” Day said.

Citing Weber’s extensive experience as snowsports director, Day said the set of goals Ness proposed was insulting to “a guy that works 60-70 hours a week and has three decades of doing this.”