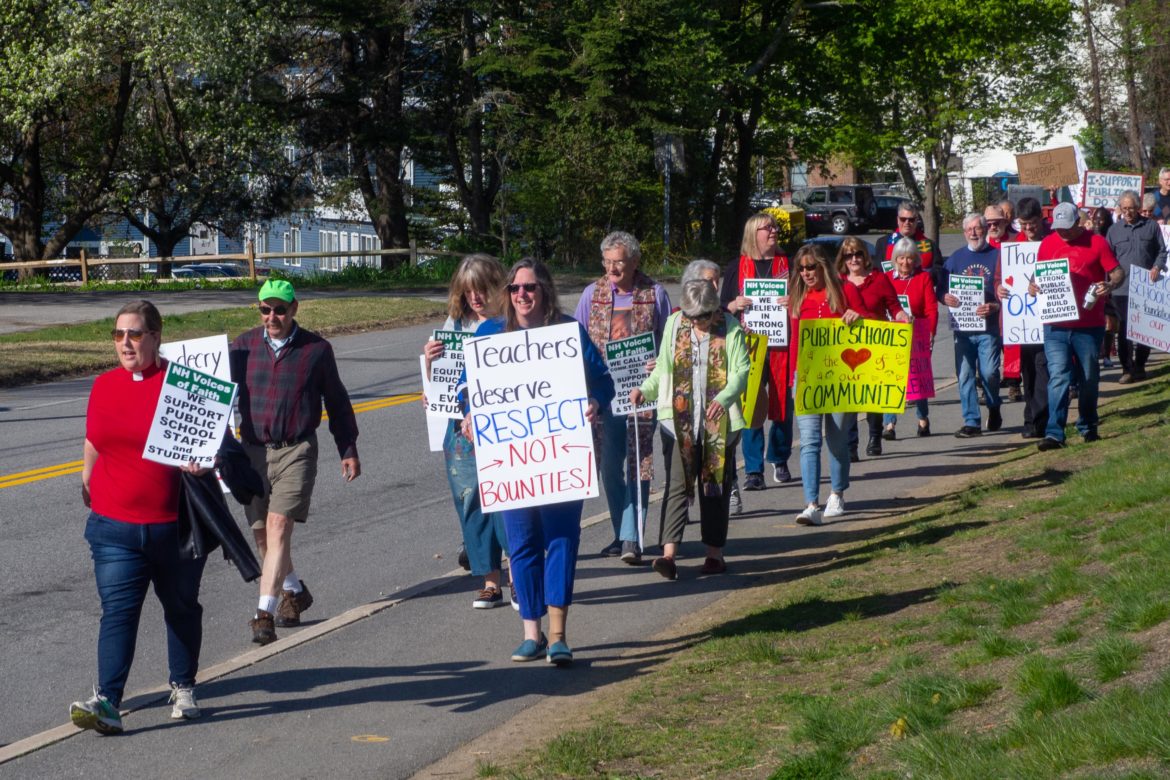 DURHAM—When Frank Edelblut, New Hampshire’s Commissioner of Education, published an opinion column on “Education’s Sacred Trust” last month, his words captured the attention of clergy and religious groups whose ideas on what is sacred appear to differ from those of the commissioner.

That’s one reason why dozens of sign-carrying citizens walked from a Durham church to a “visibility action” outside the middle school where Commissioner Edelblut and the State Board of Education met on Thursday, May 12.

“Recent revelations from educators around the country, mostly on social media platforms like TikTok, reveal a number of educators who believe that it is their responsibility to weigh in on and influence the value systems of the children toward a particular goal,” Commissioner Edelblut said in his op-ed.  While most teachers avoid imposing their own suspect values on children, Edelblut went on, flawed practices “are beginning to seep into our own institutions.”

Based on a 68-page packet he posted online, most of the instructional materials he finds problematic deal with race and gender.

For the Rev. Heidi Heath, who heads the NH Council of Churches and led the protest, it’s Edelblut’s social conservative views that are problematic.  “Commissioner Edelblut has really taken a hard hit at our public education system and has made really clear that he does not stand in support — despite his role here in the state — of our teachers and our students and our staff.”

“Our scriptures tell us that it is our responsibility to care for the vulnerable, to love our neighbor and that a priority for Jesus and his ministry was our children,” she added.  “We believe there is no such thing as ‘other people’s children.’ It is part of our theology to care for and lift up the structures and the things in our society that care for children, and for us the backbone of that work is public education.”

“Kids should have a chance to learn about their country, and about its difficult things, and its hard things and its possibilities, and we support our teachers in this way,” said the Rev. Dave Grishaw-Jones of the Community Church of Durham, where the group assembled Thursday morning.

“This church has always cared about education as the vehicle, or the place, where our young people get educated in the ways of citizenship.  It’s where our kids learn how to care about the world that they live in and to take care of the communities that they live in. Without them, we lose that critical piece of democracy and citizenship. We want to support public education for all kinds of reasons, but that’s at the center of it.”

The Rt. Rev. Robert Hirschfeld, Bishop of the Episcopal Church of New Hampshire, weighed in, as well.  “Commissioner Edelblut seeks to eradicate from schools entirely topics that he doesn’t deem appropriate,” he wrote in his own op-ed.

“If the purpose of education is to prepare our New Hampshire schoolchildren for the world,” Bishop Hirschfeld said, “we need to be teaching them to have the capacity for civil discourse, rather than teaching them to avoid topics — or people — that they find difficult, controversial, or ‘other.’”

Proclaiming that “our children’s’ rights to safe, adequate and equitable education is a theological issue,” Rev. Heath led about 35 people on a half-mile walk from the Community Church to Oyster River Middle School, where they joined another 15 activists assembled by the doorway where Board of Education members would be entering.

Bill Hatcher of Dover was one of them.  “I think public education is the foundation of democracy and I think Commissioner Edelblut is trying to take apart public education methodically. That’s bad for our democracy as well as bad for students,” he said.  As for why so many people turned out today, Hatcher said, “It’s a culmination of a lot of bad legislation that was being proposed, the voucher program taking root, and people are just tired of it.”

About half of the protest group followed board members into the school and up the stairs to a capacious auditorium.  As they entered and signed in, copies of the meeting’s printed agenda were available.  Under Item III, “Public Comment,” the agenda said, “The State Board of Education welcomes public commentary.  There will be NO in person commentary at this month’s meeting as it is being hosted by a school during school hours.”

According to the NH Department of Education, “It has been the longstanding practice of the State Board of Education to not receive in-person, public comments during meetings that are hosted by a public school during school hours. The off-site meetings remain open to the public, and the board welcomes public comment to be submitted in writing.”

That did not appear to discourage Janet Ward of Contoocook.  She shares the concern of those who believe policies espoused by Commissioner Edelblut threaten democracy.  She’s been to board meetings before, she said, and she’ll be at board meetings in the future.  Yes, Ward said, she has sent in comments by email and hopes the commissioner and board members read them.

Drew Cline, who chairs the board of education, said in-person public comments will be back on the agenda for the board’s next meeting, June 9.   He’ll probably see Rev. Heath there.  “I think we made an impact on the State Board of Education and this is the first of many,” she said. “We will absolutely do this again.”