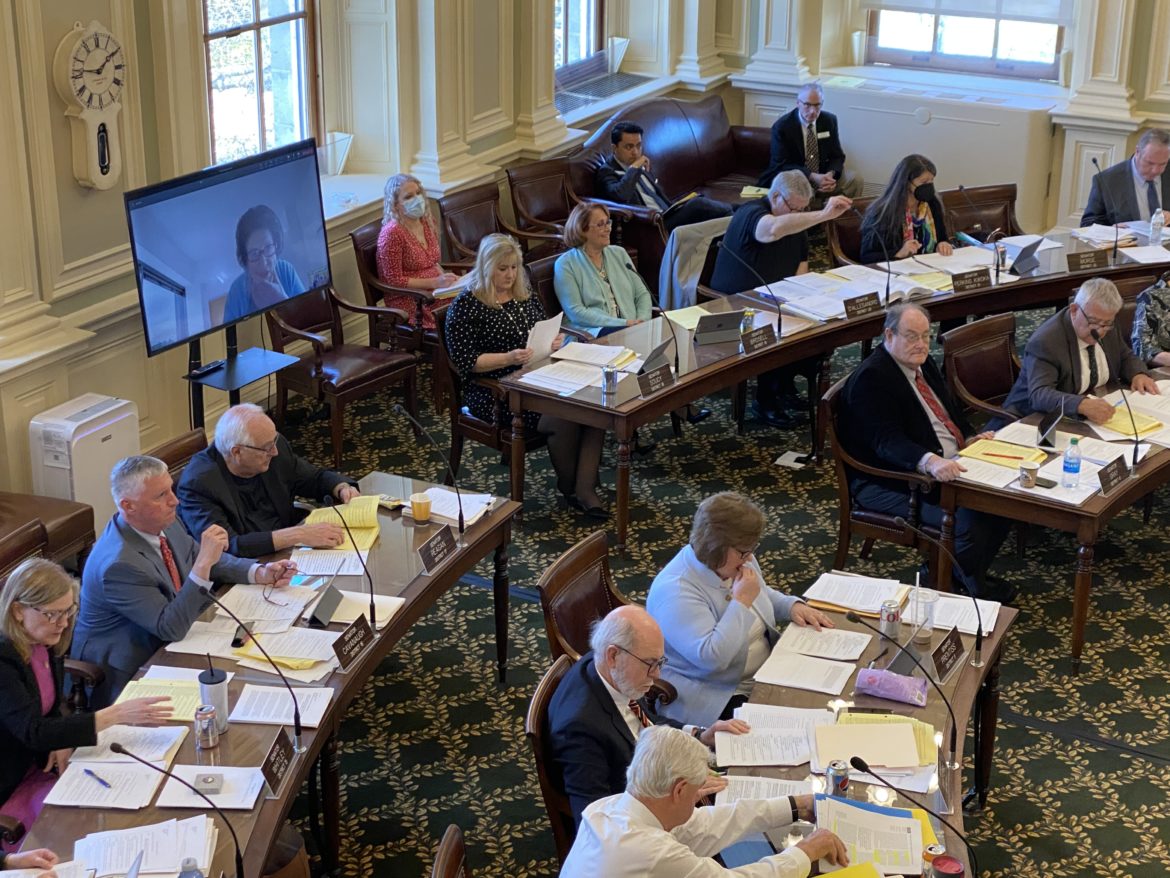 The Senate met in session on May 5 with Senator Rosenwald participating remotely.

CONCORD – The state Senate passed a parents’ bill of rights for schools, approved a reduction in the business profits tax, and approved a measure that would allow Belknap County residents to vote on members of the Gunstock Area Commission Thursday.

It also approved a $500 increase in pension for some state employees and would allow public works employees killed in the line of duty to get $100,000 among other measures.

PARENTAL BILL OF RIGHTS
The “Parental Bill of Rights” legislation requiring school officials to report the activities related to their child, such as what clubs they join or if they seek mental health support passed the Senate Thursday.

The amended House Bill 1431 was approved 13-11 after going to the Finance Committee and receiving an amendment. It will need to go back to the House.

Democrats all opposed it. Sen. John Reagan, R-Deerfield, voted with the Democrats.

State. Sen. Becky Whitley, D-Hopkinton, said the legislation would “out” LGBTQ youths to their parents and asked the Senate to go back to the drawing board on the bill and find out what are the concerns of parents.

“We have to understand how sweeping this is,” she said. “This is not how we foster a productive learning environment.”

Sen. Lou D’Allesandro, D-Manchester, a retired teacher and coach, said it would break the bond between coach and teacher and students and the relationships developed are “sacred, you don’t want to violate that.”

Sen. Sharon Carson, R-Londonderry, asked to amend the bill to strengthen the safety of children who would be protected and noted the state Division for Children, Youth and Family could still do its job if students confide that their parents are abusing them.

He gave a bit of an American history lesson and spoke a bit of the struggle of parents.

“‘You’re not the boss of me,’ remember that?” he said. “There is always that tension when they are going to spread their wings.”

The fear he said is that with this bill “we end up policing curiosity…I appreciate the amendment that came in because it recognizes the right to physical privacy but what about the child’s mind?”

Carson said the bill speaks to who has the responsibility for the children.

“Why would we have people interfering with that relationship?” Carson asked.

While it is good that students have other adults to talk to, they are not the individuals responsible for the child, she said.

“Parents need to know what is going on in the lives of their children,” Carson said, adding that they can’t support their LGBTQ children if they’re aren’t told. “Keeping secrets is not the way to go.”

Sen. Rebecca Perkins Kwoka, D-Portsmouth, said this looks like model language going around the country. She agrees that parents are responsible for their children but she said she has the perspective of being part of the LGBTQ community.

“I think all we are saying is kids need a little space to do that,” she said. “They need someone else to turn to…that isn’t that paramount relationship in their life.”

Perkins Kwoka said she does not feel the need “to legislate this.”

Sen. Jay Kahn, D-Keene, said the bill makes everything in the school confrontational and some parts of the bill are too vague and may lead to litigation.

“Is this the ‘don’t say gay bill’ of this legislation? It looks like it,” Kahn stated.

Sen. Jeb Bradley, R-Wolfeboro, said this has nothing to do with the Florida bill “Don’t say gay” and you should know better,” he told Kahn.

PUBLIC COMMENT PERIODS AT SCHOOL BOARD MEETINGS
The Senate passed House Bill 1195 as amended which will require school boards to offer a public comment period during a meeting.

The matter passed on a voice vote.

REDUCING THE BUSINESS PROFITS TAX
HB 1221-FN-A reduces the rate of the business profits tax from 7.6 to 7.5 percent and was supported on a party-line vote of 14-10.

Sen. Donna Soucy, D-Manchester, asked to divide the bill and she and other Democrats opposed certain aspects of the bill related to a permanent .1 percent reduction in the tax.

D’Allesandro said very fortunately the state has had a very robust economy.

There is no need to reduce the BPT he said “our businesses are thriving, they are doing well. What do we need to do for them? They need employees.”

Bradley said the state needs to stay competitive with interest rates raised by half a percent, the largest increase since 2000.

“We are looking at a recession by a lot of people’s estimates. That means New Hampshire better be a good state to retain businesses,” he said.

“You kill the golden goose, you don’t get property tax relief,” Bradley said. “Lowering the business profits tax has been wildly successful.”

D’Allesandro said the state should reinstate revenue sharing. He said the current tax at 7.5 percent is “beautiful, it’s fine” but the state could take the extra unanticipated money and send it back to municipalities to help relieve property taxes.

Sen. Thomas Sherman, D-Rye, a candidate for governor, said he has not spoken to a single business executive who wants this tax decrease more than they want property taxes decreased.

“They want to see us invest in our infrastructure and that is what we need to do,” Sherman said.

The second vote was on the remainder of the bill and the effective date and it passed on a voice vote.

RIGHT-TO-KNOW OMBUDSMEN
House Bill 481 which would create a Right to Know ombudsmen, to be confirmed by the executive council was passed on a voice vote.

DEATH BENEFITS FOR PUBLIC WORKS EMPLOYEES APPROVED
House Bill 536, which seeks to give a $100,000 death benefit for public works employees killed in the line of duty, similar to police and firefighters, was adopted on a voice vote.

D’Allesandro said he sponsored the death benefit for police officers and firefighters and he called it a vital piece of legislation. Like firefighters and police, he said these workers are put in harm’s way for the public good.

He said these people work close to fast-moving traffic, some of whom drive excessively fast and do not pays attention.

ONE TIME $500 PAYMENT A YEAR FOR SOME STATE RETIREES
A bill that would give retired state employees $500 a year for everyone making under $30,000 in their retirement was passed 17-7.

The bill does not ask what other wealth they have, Reagan said.

D’Allesandro said in the past there have been efforts to create a COLA but it failed.

“People need it and indeed, we have the ability to pay,” he said

CYANOBACTERIA STUDY
House Bill 1066 requires the Department of Environmental Services to develop a plan to control cyanobacteria blooms in lakes and other waters. The bill allocates $30,000 for a study. These blooms have an impact on Crystal Lake and Lake Mascoma said Sen. Suzanne Prentiss, D-Lebanon.

Kahn said “it’s coming to your neighborhood, soon” and the state should be equipped with more information on cyanobacteria.

The bill was unanimously supported by all 24 members of the Senate.

Sen. Bob Giuda, R-Warren, said he would vote “no” because there was no grade level information in the bill and some information may be presented at too early an age and might not be supported by parents.

GUNSTOCK
Senators voted to allow Belknap County residents to elect members of the Gunstock Area Commission rather than have it remain under the control of the Belknap County legislative delegation, Thursday.

This follows political controversy in the county and supports a petition, signed by 3,600 residents, who want to see the commission voted rather than appointed, in a non-partisan election.

House Bill 1397 was amended by Giuda who said that the vote was needed to return Gunstock to its owners, the residents of the county rather than be used as a political football.

He charged the 18-member delegation wants to privatize the ski area and has been taking steps toward that through the replacement of members on the commission.

Initially amended in committee, a measure was defeated to give non-voting, ex-officio representation on the commission from a designee of the state Office of Business and Economic Affairs and the Belknap County Administrator.

When that measure was defeated on a voice vote, Giuda brought in his amendment which was part of his original efforts in committee.

The amended bill will have to now go to the House where it faces the 18-member Belknap County legislative delegation and other likely opposition.

A link to the Senate public hearing on the bill and the background related to the controversy can be found here.