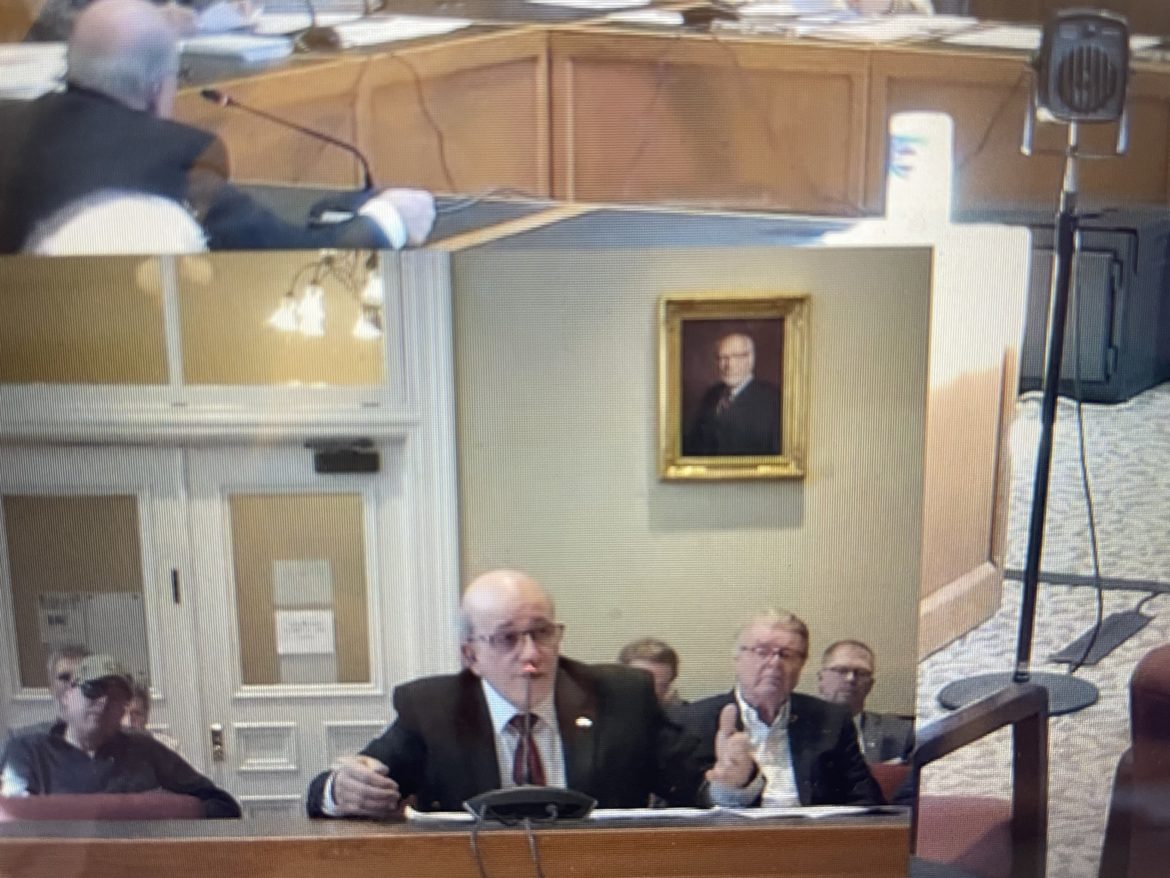 CONCORD – The five-member Gunstock Area Commission could be elected by Belknap County residents rather than appointed by the county’s legislative delegation under a re-amended bill heard by a Senate committee on Monday.

It would return control of a public asset to the people of the county, Giuda said.
Currently, it is a large business being politically controlled by the 18 members of the delegation.
He said legislation creating the commission in 1959 was intended to avoid the debacle that is now underway; a “power play” between the commission and delegation which could jeopardize the ski area and the $9 million balance in its account.

Giuda said legislators are not executives and the voters should decide the commission by electing them.

The amendment would strip the county delegation of that authority, repeal existing law and have candidates for the commission chosen in a nonpartisan election in conjunction with the state general election.

If passed, it would be effective 60 days after the bill is made law and all five seats would be up for election this fall with various lengths of terms from two-year to five-year terms although Sen. James Gray, chair, said he was not sure that terms of the existing members would be impacted by an immediate vote or left to run their terms.

House Bill 1078, promoted last year by members of the Belknap County delegation, which would have eliminated the commission and given them budgetary control was rightfully killed in committee, Lang noted.

He said he would prefer to see the 61,000 voters of the county consider candidates over five months rather than have them be selected by the delegation.

The delegation last week voted to choose Gilford’s Doug Lambert to fill an open position over candidates with experience operating or being part of ski area operations.
Lambert said he opposes the commission’s ambitious master plan unveiled this winter, which included the development of more lifts and ski trails, the construction of a road to the summit, a restaurant at the summit, and a partnership to develop a hotel on the property.

The vacancy which Lambert will now fill came after Edward J. “Rusty” McLear of Meredith, a noted hotel developer in Meredith, had to step down after the delegation realized it erred in the length of his appointed term.

McLear initially ran for his own seat but stepped aside to endorse John Lowell of Center Harbor, who recently retired from the ski industry at Attitash and Wildcat with extensive experience.

Cindy Creteau-Miller, who had worked at ski resorts in Vermont, had also applied to the delegation.
The county-owned area has been part of the state’s ski industry since 1937 when its first trails were developed by the Civilian Conservation Corps and used federal monies to develop over time.

That makes the concept of selling it unlikely, but a lease, similar to the state’s lease of Mount Sunapee in Newbury, first to the owners of Vermont’s Okemo Mountain and now to Vail Corp., a possibility going forward.

Gunstock has a general manager, Tom Day, with operations experience at Waterville Valley. He works for the commission.

Members of the delegation opposed the amendment during the hearing.
State Rep. Norm Silber, R-Gilford, said in the past the ski area has had to be bailed out by the county in the amount of $6 million and although paid back in part, it still owes the county, but Lang said that was not in recent years.

Silber said the ski area food and beverage compete with local businesses and the 18,040 acres of Gunstock pay only a $6,587 year in taxes.

Rep. Gregg Hough, R-Laconia, also opposed the bill.
He said the delegation acted lawfully to fill the Gunstock Area Commission vacancies. He called the amendment “a poorly thought out and thinly veiled attempt” to circumvent the legal appointment process.

Hough said there has been a local media firestorm that has been disparaging of the delegation.

He said there have been 62 years of no problems and that overall it has been a profitable concern for the county.

Giuda said at the basis of the controversy is whether or not the resort should be politically controlled or operated as a for-profit concern.
It is controlled politically now, he said.

Hough said it’s about Giuda not getting his candidate chosen to fill the vacant position on the GAC last week.
McLear, who used to own inns in nearby Meredith, said Gunstock is a resort and it was very important to his business.

Members of the delegation said they have never fired any commissioners and that there is a misconception of that in the public.

A petition seeking the GAC be elected rather than appointed has more than 2,000 signatures of support.

The five-member commission appointed by the legislative delegation was set up in 1959 which this amended bill seeks to change.

The commission forwarded a new master plan in December 2021 which included plans to add almost 200 more acres of skiable terrain in three areas, two of which are currently owned by the county. This would be moving the trail count from 49 to 73 which would be the most trails in the state on the 2,267-foot mountain.

The plan also involves the construction of a toll road to the summit, a mountaintop dining area, new lifts, a hotel that would be privately operated, and as the master plan asserts, the state’s first ski-in, ski-out lodging, and expanded snowmaking. A copy of the master plan can be found, here.
https://www.gunstock.com/community/master-plan/
In 2009, the GAC undertook a $4 million improvement plan. In 2011 it added the Adventure Park costing about $2.1 million, and in 2016 added the mountain coaster.

The plans for the new master plan are based on the resort’s strong financial position, members of the GAC wrote, and are intended to be built out over a period of five years.
But that plan is not going forward immediately.

Members of the GAC board, in addition to Lambert, are Gary Kiedaisch of Meredith, with experience operating large New England resorts including Stowe for eight years, Peter Ness of Belmont, Jade Wood of Gilford, and Dr. David Strang of Gilmanton.

Strang voiced “vehement” opposition to the amended bill. He is chair of the GAC. Strang was not a member of the GAC board that sued the delegation.
He warned there would be new public facts released in the coming days about the GAC and urged the legislature to not get involved and allow the issues to be resolved in Belknap County.

He said if the GAC were elected it would be expensive and hard to campaign in all the towns in the county. He said only the very rich or retired would be able to afford the money and time to run, which was countered by Lang who noted that county treasurers and registers of deeds run without the need for vast finances and time.

Strang said the bill would also change the removal process and put it in the hands of just two of three members of the Belknap County Commission, not the 18-member delegation.
“This is a step backward,” Strang said.

Kiedaisch also spoke. He is a member of the GAC and said he was speaking as a private citizen and supported the amendment.
He said the amendment would get that control back to the people.

He said the delegation members “want the powers of the GAC so they can control,” Gunstock, to perhaps lease it or do what they want.
“This is not what the public wants,” Kiedaisch said. He said the ski area needs to be run by professionals, not politicians.

He said it has access to tremendous snowmaking with the waters of Lake Winnipesaukee, and state-of-the-art snowmaking gear, and should be sustainable in the years going forward.

He said he is embarrassed by the way the delegation has acted with respect to the ski area.

Voting would be true and honest and not just the political wishes of members of the delegation.

“I think we have something great to preserve,” Roche said.
A copy of Giuda’s amendment can be found here http://www.gencourt.state.nh.us/senate/calendars_journals/viewer.aspx?fileName=Calendars%5C2022%5CNo%2016A%20April%2014%202022.PDF
Members of the Belknap County delegation include Representatives Michael Sylvia of Belmont, chair, Glen Aldrich of Gilford, Harry Bean of Gilford, Mike Bordes of Laconia, Barbara Comtois of Center Barnstead, Juliet Harvey-Bolia of Tilton, Gregg Hough of Laconia, Raymond Howard Jr. of Alton, Dawn Johnson of Laconia, Tim Lang of Sanbornton, Richard Littlefield of Laconia, Jonathan Mackie of Meredith, Travis O’Hara of Belmont, Thomas Ploszaj of Center Harbor, Norm Silber of Gilford, Paul Terry of Alton, Douglas Trottier of Belmont and Peter Varney of Alton.
The Senate committee took no immediate action on the amendment or the bill but focused its executive session on moving forward bills that need to go to the Senate Finance Committee.