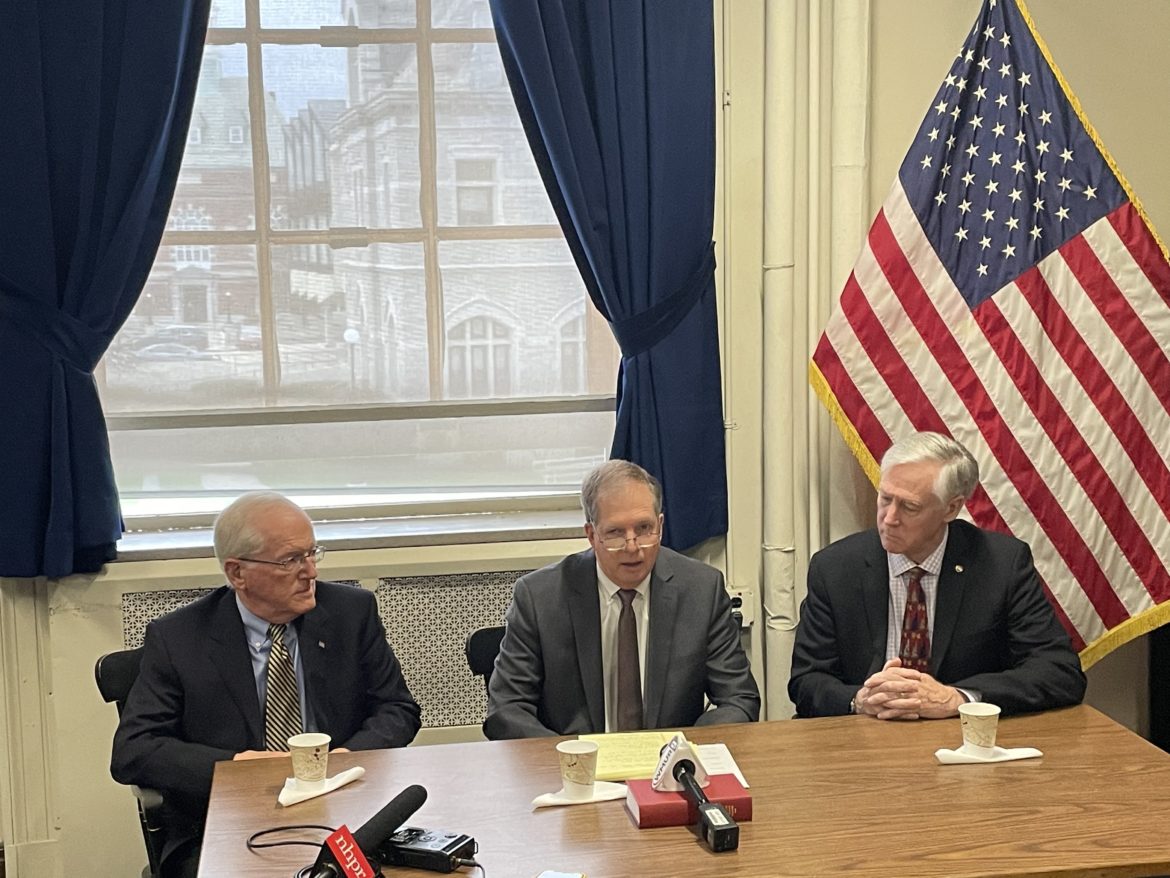 From left are Brad Cook, David Scanlan and Richard Swett.

CONCORD – Voter confidence in New Hampshire’s election process will be studied by a new commission announced Tuesday by the state’s new Secretary of State.

In 2020 and since then, supporters of former President Donald Trump have expressed unfounded beliefs nationally and locally that the election was stolen from him by Democratic President Joe Biden.

Subsequently, local ballot-counting issues in both Windham and Bedford have also led to concerns about voter integrity.

The new commission will engage with those who feel the process could be improved upon and look to recommend ways that the whole process can be more accurate and transparent.

Secretary of State David M. Scanlan told reporters the Commission on Voter Confidence will look at what is of concern to voters, and how to make the process as open and understood as possible.

In announcing the bipartisan commission in his office, Scanlan was flanked in by its co-chairs, Manchester attorney and Ballot Law Commission Chair Bradford E. Cook and former Ambassador and U.S. Congressman Richard Swett of Bow.

Scanlan said there will be a commission report following the input sessions – some of which will be offered remotely and some in-person – and the results may or may not end up as legislation. He put no timetable on the work of the commission.

“It is clear to me for some time now, a few years, that there has just a decline, both nationally and in the state of New Hampshire on the general voters’ belief about the accuracy of election results,” Scanlan said.

Scanlan, who served as deputy secretary under longtime and recently retired Secretary of State Bill Gardner, has maintained that the state has an excellent election process.

Noted for its 100 years of holding first-in-the-nation presidential primaries, with a very engaged electorate which may be threatened by national efforts to offer that role to other states, Scanlan said there is plenty of room for a timely discussion on transparency and an effort to publicly debunk myths and educate the voters on the process.

He said political polarization both nationally and in the state, a greater unwillingness to accept election outcomes, large amounts of disinformation online, in the media, and cybersecurity issues have fed into the distrust and prompted him to create this commission.

Prior to the pandemic, he noted, cybersecurity was a major issue as international efforts to undermine the election were made public.

“I think there is a number of reasons why it has taken place but I felt that it is really important to initiate a discussion on that topic, a very public one involving some very capable people with diverse interests, so we finally get to the bottom of why we find ourselves in this situation,” he said.

The first upcoming speaking engagement will be this Thursday, April 28th at the Portsmouth Rotary Club from 12:40 to 1:15 PM.

The commission meetings will be open to the public, with advance notice.

Cook, who chairs the state’s Ballot Law Commission and has a term ending in 2025, said the Secretary of State’s office does not do a good job tooting its own horn.

Swett served as Congressman from 1991-1995 and ran unsuccessfully for U.S. Senate, after being narrowly defeated by Republican Bob Smith in 1996. An architect by trade, Swett was the former U.S. Ambassador to Denmark from 1998 to 2001.

“It’s really an honor,” said Swett of being chosen as co-chair. “We have a big commitment. I am looking forward to hearing what the people all across the state have to say about their concerns about voting.”

He said the commission has no pre-determined outcomes.

Swett noted he was once in an election that ultimately led to changes in the law involving the announcing of projected winners.

“I know how things can go a little bit awry and want to make sure that the good technology that we have in New Hampshire, the good people that are participating in the polls, and the good system that we have can be kept as it is or improved,” Swett said.

Cook was tapped by the Secretary of State during the pandemic to look at temporary changes to elections required due to COVID-19. That led to changes allowing for more absentee voting and using the potential for illness as an allowed reason to get an absentee ballot.

Cook said there was tremendous voter input that led to those recommendations.

He said some political theorists cannot be changed in their understanding of what they think happened that led to what they consider a “stolen” election but it is the people who they influence that need to be told the truth.

The commission, Cook said, will “separate the wheat from the chaff…and get people to understand how the process of elections works.”

Cook said in one way or another he has been involved in studying New Hampshire elections since 1966.

Cook added, “We really do have a very interesting system in New Hampshire which we should have a lot of confidence in and hope to demonstrate that and hear from the people about what their concerns are.”

Scanlan said he thinks the current election process in New Hampshire is fair and accurate.

“I want to make it clear right out of the gate on this that I firmly believe that New Hampshire elections are sound. New Hampshire has done a great job for more than a century conducting good elections and the reason that they are sound and accurate and fair is that we keep them simple,” he said.

He said the state has thousands of election officials who understand the process and there is a difference between fraud and mistakes.

Mistakes have occurred but fraud has not been found. Errors have surfaced, Scanlan said, including recently in Windham when some folded absentee ballots were the subject of an investigation.

“When they happen they are unfortunate, they don’t necessarily lead to confidence but it is part of the human process. When we discover situations like that we always make them public and make sure they don’t happen again,” Scanlan stated.

Scanlan said that a situation in Bedford in which more than 190 ballots were not counted should have been publicly disclosed earlier.

It did not impact the final outcome of the election Attorney General John Formella has said. His office is continuing an investigation into the Bedford incident.

For more information on the commission and upcoming meetings, visit https://www.sos.nh.gov/