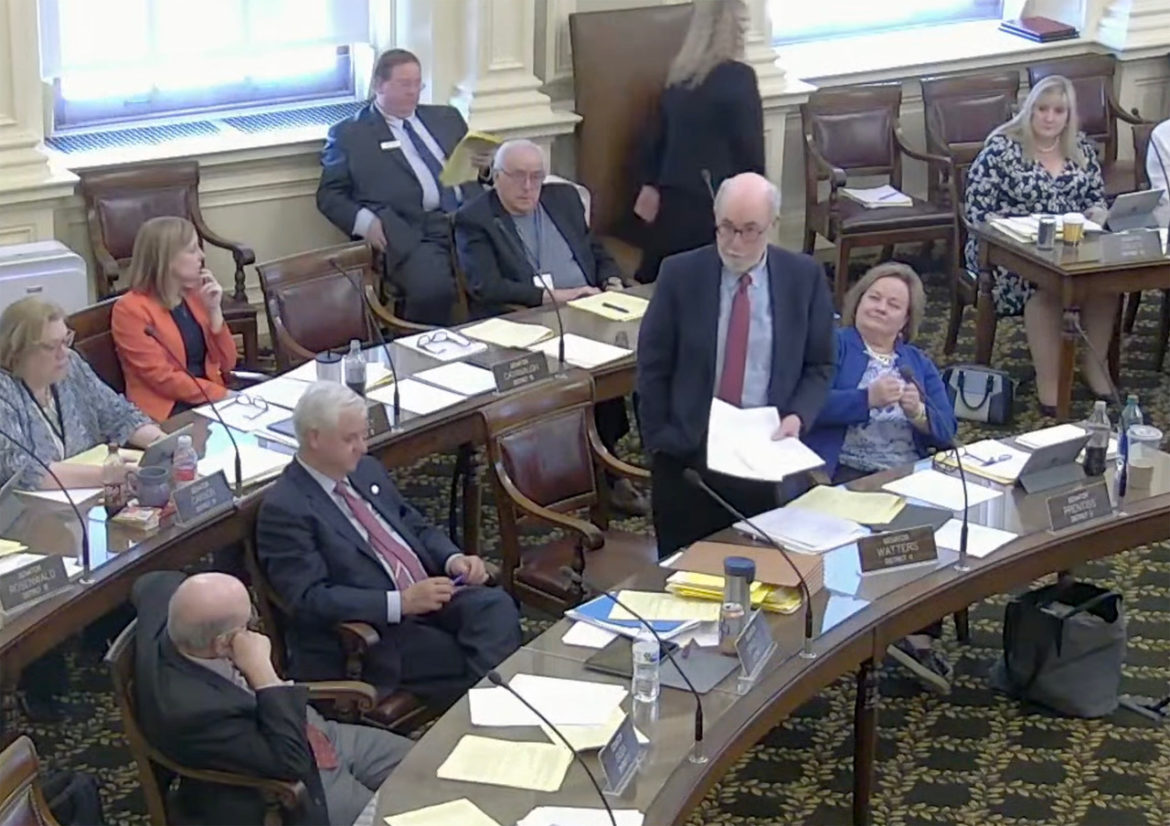 CONCORD — A bill to reduce the Business Profits Tax rate and send money to local communities prompted an extended discussion on the floor of the state Senate on Thursday, with Republicans and Democrats sharing alternate perspectives on why state revenues are doing so well.

House Bill 1221 would lower the business profits tax rate from 7.6 percent to 7.5 percent, and the amendment by Ways and Means would use the state’s surplus funds for a one-time contribution to municipalities equal to 7.5 percent of their contributions to the state retirement fund.

Sen. Bob Giuda, R-Warren, chair of the Senate Ways and Means Committee, said New Hampshire’s sound budget policies have led to a state surplus of $252 million, despite actions in Washington, D.C., that he blamed for causing inflation and high gasoline prices, putting the country on the edge of a recession.

“The amendment clearly stipulates that it is the intent of the legislature that this is a one-time appropriation of the state surplus funds to municipalities,” Giuda said, “and its intended use is the reduction of local property taxes.”

Sen. Cindy Rosenwald, D-Nashua, said that, while she supports the amendment, it only helps for one year.

Rosenwald has long fought to restore state support of the retirement fund that covers teachers, police, and firefighters, saying cities and towns had been enticed to participate in the New Hampshire Retirement System with the promise that the state would provide a portion of the cost. That was abandoned in 2011, leaving municipalities to pick up the entire cost of retirement contributions.

The one-time payment, she said, “is not responsible fiscal policy. Cities and towns need predictability and sustainability, not a cut one year and a tax hike the next year.”
She noted that the late Rep. “Renny” Cushing, who served as House Democrat Leader, had tried for years to restore state funding of the retirement fund.

“We need to commit to helping property taxpayers on an ongoing basis that’s predictable,” Rosenwald said.

When others joined to praise Cushing’s persistence in the matter, Wolfeboro Republican Sen. Jeb Bradley stood to comment, “It’s always interesting, when there’s criticism of what’s likely to be a 24-to-nothing vote … Where did this come from? It was Governor [John] Lynch’s budget that was proposed, what, 11 years ago, that the retirement subsidy would no longer be paid to cities and towns. That’s where it came from. Now we have heard about responsible fiscal policy and how somehow this is not responsible fiscal policy.”

“It’s created New Hampshire families struggling to pay home heating costs, fill their gas tanks, put food on their tables, and all of the other inflationary problems,” Bradley said. “A myriad of factors have gone into that irresponsible fiscal policy coming from our nation’s capital.”

Bradley said that, if the state is generating the same kinds of surpluses next year, “I’m going to be … advocating for more of this property tax relief in the future, but doing it responsibly, when it’s affordable.”

Sen. Tom Sherman, D-Rye, took Bradley to task: “It’s great that all 24 of us are likely to vote in favor of this,” he said. “What I marvel at is how we can have different versions of history and different versions of reality among colleagues. I think when we look at inflation, that part that my friend from District 3 forgot is a guy named Putin. Cost of energy, cost of inflation, COVID supply chain, not all of it, I’m sure. But let’s not take things in isolation.

“Big surplus?” he continued. “We’ve received over $2 billion in federal funding, thanks to our federal delegation, senators Hassan and Shaheen, Congressman Pappas, Congresswoman Kuster. But we’re here in New Hampshire, in the State House, and we have a reality that we all share, that we have to deal with. So here we are passing a permanent reduction to the business profits tax, mostly benefitting out-of-state large corporations, and we’re passing a one-time possible benefit to the property tax, which would benefit the vast majority of New Hampshire residents and the vast majority of our businesses. Maybe we should flip that. Maybe we should embrace Renny’s bill.”

Giuda said reducing the business profits tax fulfills a promise legislators made to businesses years ago.

“As has been repeatedly demonstrated over the last six years that I’ve been in this body, when we reduce taxes, state revenues increase, and they continue to increase, and they increased through the recession,” Giuda said. “Those surpluses came from solid tax policy and good business practices as we set the environment for businesses to flourish. And I’m really tired of hearing the criticism of multinational corporations that provide tens of thousands of good-paying jobs and benefits, including family medical leave, for most of their employees who reside in our state.”

Sen. David Watters, D-Dover, countered, “Let’s think about what happened here in the last couple of years. We brought $10.6 billion dollars into the state from federal sources. We brought $6 billion into New Hampshire entities, public and private, and grant funding of $10.7 billion in payroll protection, individual assistance, unemployment, and $7 billion in the state. That boosted our economy as well.”

Watters added, “I will say, Mr. President, that I was a little surprised to see this bill come through with language that really I’m used to seeing on a political flier. Now I know it’s 2022, I know it’s an election year, but usually when I see this language, it’s in a flier and I have a place, a recycling bin, to put these in.”
After all the discussion, the Senate passed both the amendment and the bill as amended, sending it on to the Finance Committee for final action.

Bradley said after the vote, “The $28 million our municipalities will receive under the Property Tax Relief Act can be used to defray public employee retirement costs which will create direct relief to taxpayers. We are strongly encouraging local officials to use this one-time money for tax relief instead of increased spending.”