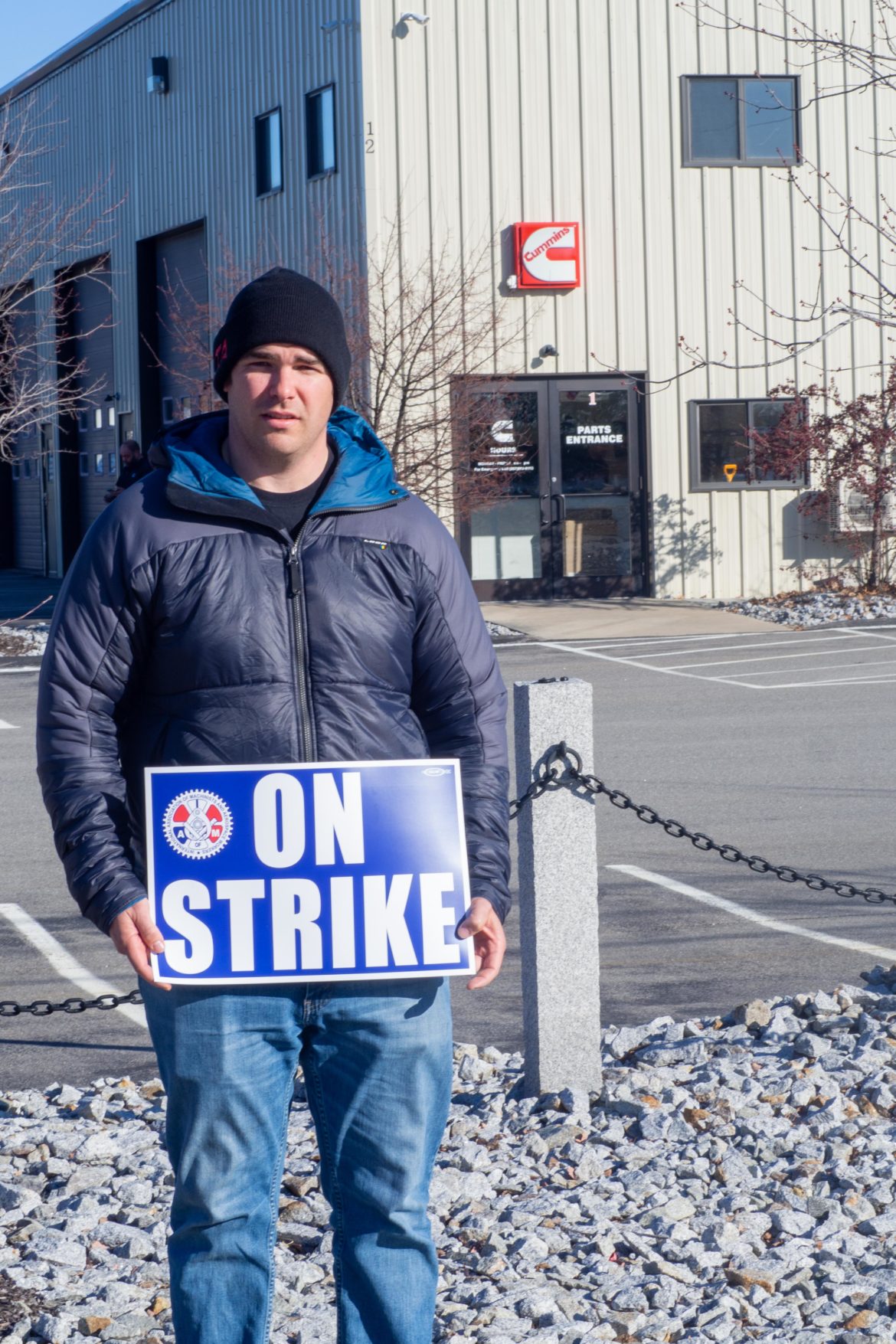 Justin Hovey of Exeter was on strike for two months.

After two months on the picket line, workers at Cummins Corporation facilities in New Hampshire, Maine, and Massachusetts are back on the job with a new contract that promises wage increases, bonuses, and expanded benefits.

About 30 members of the International Association of Machinists and Aerospace Workers (IAM) Local 447 went on strike Feb. 12 after rejecting a company proposal that would have substituted a “pay for performance” system for regular wage increases.   According to the union, members voted unanimously to strike “after Cummins management insisted on a contract that put into place inconsistent and subjective pay for performance policies.”

At the time, IAM District 15 Assistant Directing Business Representative Mike Vartabedian said, “Our members are trying to do the right thing and fight for a contract that will make life better for their families and they are a huge part of Cummins’ success. They risked the health of themselves and their families by working through a pandemic to service generators that helped keep our senior citizens in nursing homes safe and supporting our frontline workers throughout New England to save lives. We hope that they will present us with an offer that values the hard work of our members.”

Under the new contract, the IAM members will receive annual raises for the next 3 years (4%, 3%, 3%) with the possibility of individual performance bonuses on top.

In addition, the union members will receive more paid holidays, increased allowances for shoes and boots, bereavement pay, and other benefits.

“It feels good to be working again,” said Justin Hovey, a field service power generation technician who has been with Cummins for nearly ten years.  With his wife expecting a baby next month and health insurance suspended by the company during the strike, he said the strike was a stressful experience.

For Hovey, who lives in Exeter, the company’s unwillingness to compensate workers for the rising cost of living was always the issue.  “Everyone that works there knows that the company raises their prices every year to do business,” he said, yet they didn’t want to provide regular pay raises.  “That’s what we were really holding out for.”

“Our members at Cummins held strong to get a contract that values their hard work and will make life better for themselves and their families,” said Vartabedian.

Jon Mills, a Cummins spokesperson, said “We are pleased that we reached an agreement with the IAM that provides an excellent wage and benefit package for our employees and their families and is also beneficial for our company. We are glad to have our employees back at work and appreciate their contributions. We remain committed to providing the best work environment and benefits for all our employees.”

Cummins, an Ohio-based company which brought in $19.8 billion in revenue last year, manufactures, sells, and services diesel and alternative-fueled engines.

“We’re in an interesting moment right now where workers are starting to realize their power in the labor market and starting to flex their muscle,” commented Todd Vachon, who directs the Labor Education Action Research Network at Rutgers University.

“The recent upsurge in strike activity has reminded employers that the threat of a strike is a realistic possibility,” observed Chris Rhomberg, a professor of sociology at Fordham.  “That can lead them to take negotiations with the union more seriously, and workers in general can gain leverage from that.”

What some call a “labor shortage” is really a “wage and good job shortage,” says Vachon.  But whatever you call it, “it’s really empowering the workers that do have unions in their shops and that are negotiating contracts right now, threatening to go on strike and even going on strike, putting a lot of pressure on employers who don’t have a reserve pool of labor to draw from, to really do the right thing to keep their operations running.  They’re going to need to satisfy the demands of their workers.”