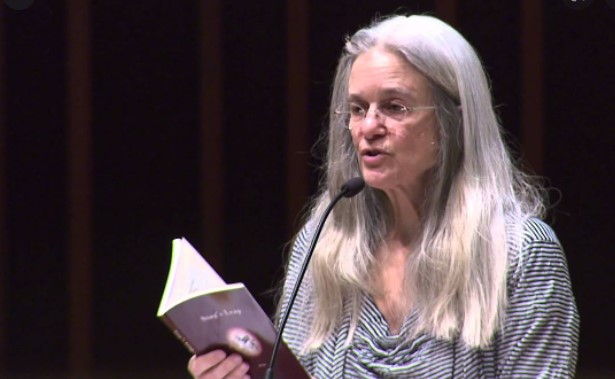 A few decades ago, my friend, Gina and I took a bus from the Netherlands to Germany in order to learn to ski.  As the opportunity was very last minute, very cheap, we packed our bags and, as we were young, single and fancy free, we giggled with excitement as we boarded.  We claimed our seats, I took out my M&Ms and we settled in for a ride on the autobahn toward Berchtesgaden.

But, as happens, Gina could not read or travel comfortably without getting car sick. So, as I’d grabbed my Norton Anthology of Poetry for the trip, I ate M&M’s and I read poetry out loud to pass the hours.

One poem stands out, one poem stayed with both of us: The Race by Sharon Olds.  And as it is National Poetry Month, I’m going to share that poem with you, Joyful Musers, a poem that would later have more meaning as I drove Gina to the airport in Brussels as she learned her wonderful Dad had suffered a heart attack.

Enjoy today’s poem. I muse joyfully you’ll read poetry out loud to comfort a friend, to make a trip pass in beauty, to celebrate National Poetry Month. Stay well, Joyful Musers and may you always find comfort in poetry.

The Race by Sharon Olds

When I got to the airport I rushed up to the desk,

they told me the flight was cancelled, the doctors

had said my father would not live through the night

and the flight was cancelled. A young man

with a dark brown moustache told me

another airline had a nonstop

leaving in seven minutes. See that

elevator over there, well go

down to the first floor, make a right, you’ll

see a yellow bus, get off at the

second Pan Am terminal, I

ran, I who have no sense of direction

raced exactly where he’d told me, a fish

the flow of the river. I jumped off that bus with those

bags I had thrown everything into

in five minutes, and ran, the bags

wagged me from side to side as if

to prove I was under the claims of the material,

I ran up to a man with a flower on his breast,

I who always go to the end of the line, I said

Help me. He looked at my ticket, he said

Make a left and then a right, go up the moving stairs and then

run. I lumbered up the moving stairs,

at the top I saw the corridor,

and then I took a deep breath, I said

I used my legs and heart as if I would

gladly use them up for this,

to touch him again in this life. I ran, and the

bags banged against me, wheeled and coursed

in skewed orbits, I have seen pictures of

in scarves grasped in their fists, I blessed my

long legs he gave me, my strong

heart I abandoned to its own purpose,

I ran to Gate 17 and they were

lozenge of the door to fit it into

the socket of the plane. Like the one who is not

too rich, I turned sideways and

slipped through the needle’s eye, and then

I walked down the aisle toward my father. The jet

was full, and people’s hair was shining, they were

smiling, the interior of the plane was filled with a

I wept as people weep when they enter heaven,

in massive relief. We lifted up

gently from one tip of the continent

and did not stop until we set down lightly on the

other edge, I walked into his room

and watched his chest rise slowly

and sink again, all night

I watched him breathe.