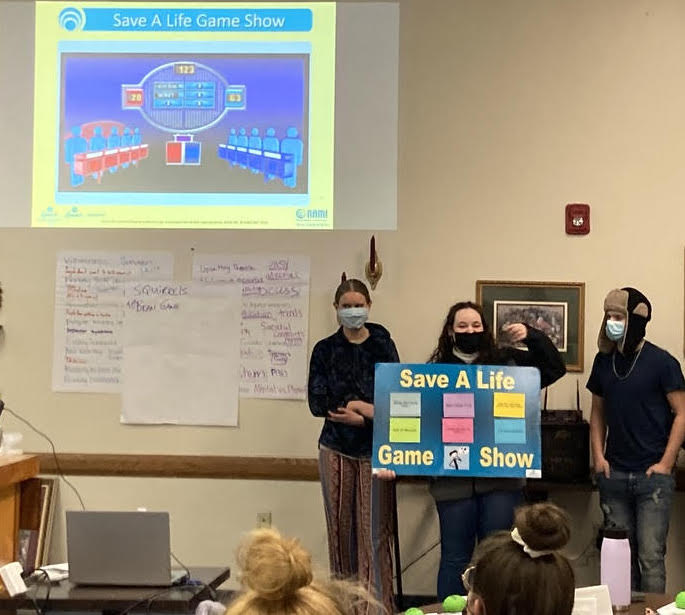 Students from Franklin, Interlakes, and Newfound High Schools joined forces on February 16, 2022 to learn about NAMI NH's Connect Suicide Prevention Program. They will return to their schools to educate their peers and communities in an effort to raise awareness about mental health issues and suicide prevention. This effort was funded through a NH DOE Promising Future's Grant.

A bill that would alter administering a long-standing biennial health survey conducted with high school students has passed the House and is headed to a hearing in the Senate Education Committee.

Rep. Ralph Boehm, R-Litchfield, who sponsored the bill, HB 1639, says the bill addresses parental rights and proposes to change the survey to a parental opt-in from an opt-out.

The bill addresses the Youth Risk Behavior Survey – YRBS – which is jointly administered by the state Department of Education and the state Department of Health and Human Resources, and conducted nationally by the Centers for Disease Control every other year. Currently, parents can choose to opt out of giving permission for their teens to take the survey.

“The data from the YRBS are used extensively by health departments, schools, and local area agencies to define areas of high health risk and to secure the resources necessary to address any identified issues,” according to the Health and Human Services website. The survey is available on the site.  DHHS also lists health issues the survey seeks to identify:

Police Chief David Goldstein of Franklin, who is also Wellness Committee Chair of the New Hampshire Association of Chiefs of Police, testified at the House Education Committee hearing on the bill. He said, “We depend on the YRBS to support primary preventions of drug abuse.” He said, “In public health research, we want to know what’s going on. We’ve lost a generation to drug abuse. We need the information [we obtain through YRBS.]  Now we know who to aim our prevention efforts at.”

Boehm said at the hearing that he believed non-academic surveys needed to be reined in. He said, “It is the school’s responsibility to teach, not be social workers.”  He continued, “This survey is taken as a joke.”

When students are told the survey date, “social media goes rampant with entries on how to answer the questions.”  He believed that parents did not have access to the questions in the survey. He also said, “The survey interferes with students’ learning activities.”

Boehm indicated that the survey didn’t protect students’ privacy. He said, “It’s proven time after time that no survey is anonymous.”
Chiahui Chawla, Bureau Chief of Public Health Statistics, testified that the survey is anonymous.  Students respond to the questionnaire using a numerical code, not their names. Data is aggregated to show trends in a region or community. “We don’t publish answers, only the aggregate data to show trends.”

Chawla said, “Opt out helps to maximize data collection. Opt in would create a significant barrier to the survey.   She said that if response goes below 60%, the data wouldn’t be valid. “New Hampshire might have no data specific to New Hampshire on vaping, drinking, suicide [ideation], harassment. Opting in would significantly lower the amount of data made available to health policy makers.”

Bill co-sponsor, Rep. Glenn Cordelli, R-Tuftonboro, said in a phone call that, with opt in,  he believed, “There might be less surveys filled out, but it might be more accurate data because the people would be more interested in completing it.”

Here’s what students see when they open the survey, “This survey is about health behavior. It has been developed so you can tell us what you do that may affect your health. The information you give will be used to improve health education for young people like yourself.” The full survey from the DHHS website is here.

Barbara Slayton is the coordinator of School Wellness in the Franklin School District.  She said, “Some parents opt out, saying ‘my child will be triggered’ by a question or ‘it’s none of your business.’”

Slayton said in her experience, most students answer the survey honestly. “It’s so rare that we actually ask students about their own experience, that, given an opportunity, they want to be known. They want people to know what they’ve lived through.”

“The survey gives a snapshot,” Slayton said, of the experiences of youths. The data can show high drug use, vaping, thinking about suicide, and the district can build curriculum and apply for federally funded programs that support students in these areas.

Using YRBS data, Slayton said, Franklin has won grants in recent years.  Currently the school district is supported by grants totaling approximately $550,000.  Between 2015 and 2020, grants for the community totaled approximately $2,750,000.

Rep. Cordelli said “preventing suicide and drug abuse should be addressed by the state, not by [using] the YRBS.”  He is doing further research on court cases pertaining to surveys that he’ll present in the Senate hearing.

The bill also requires school boards to approve the Youth Risk Behavior Survey before administering the survey to students. The bill is in committee in the Senate with no floor date published yet.

The New Hampshire Department of Education does not take a position on HB 1639.

Reaching Higher NH, a nonpartisan 501C-3, writes that making the Youth Risk Behavior Survey opt in, rather than opt out, is “potentially putting millions of dollars of federal grants at risk.”