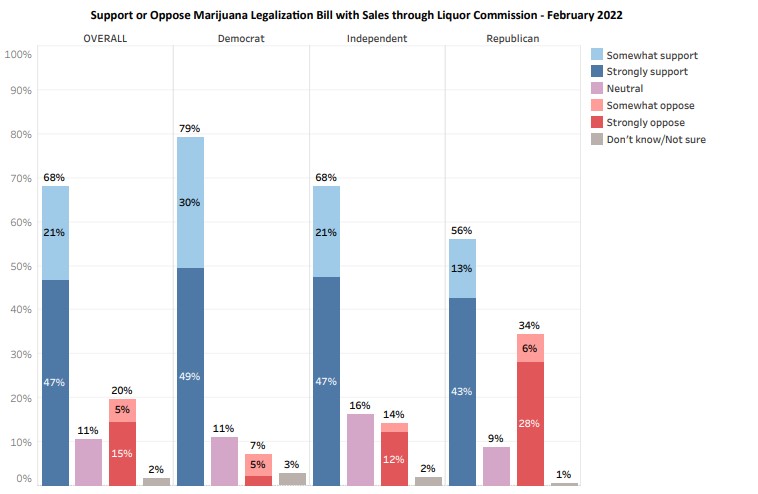 “More than two-thirds of Granite Staters support proposed legislation to legalize marijuana, allowing it to be sold in state liquor stores,” according to a Granite State Poll by the University of New Hampshire released Feb. 25.

While Abbas hopes for fair consideration of the bill, he also said he would not support it if any taxes were added. Yet, he felt confident that none would be.

Abbas explained New Hampshire has a successful liquor store model where competitive prices at an off-the-shelf location would be better than purchasing on the illegal market.

Regulation by the NH Liquor Commission would be the key. “When it’s regulated by the Liquor Commission, the other advantage is the liquor investigators’ jobs would be to investigate issues involving illegal markets, too. You would have the same oversight going into the motivation to do it,” he said.

HB237 dealt with the legalization and regulation of cannabis. The bill was tabled in January 2021.

With assumptions and calculations, the first-year total wholesale and retail sales to the state were estimated to be from $14.4 million to $36.4 million in the first year. It advised, however, if cannabis continues to be purchased through the black markets instead of retail stores, the Department of Revenue Administration noted the estimate is overstated.

Abbas cautioned, “I can’t imagine any other industry where you have about a 40-45% market share being lost to an illegal market. You don’t want to have that illegal market share to be there, especially to that degree.” He also said out-of-state liquor sales represent 40-50% of the liquor sales in New Hampshire. “There’s no reason why we couldn’t keep that same model and apply that.”

“The overwhelming majority of the people who have been strongly against it, I hear from them, they say, ‘think of the children.’ I do. I have a three-and-a-half-year-old and a ten-month-old. I’m right in it with everyone else.”

Rep. Susan Homola, R-Hollis, has previously said there are ten years of data showing legalizing marijuana increases use among young people, traffic deaths, and mental illness. “Yet we continue to hear the same tired argument that it is inevitable, and it is time to catch up with other train wrecks in other states,” Homola said.

Abbas noted the NH Liquor stores excel at keeping liquor out of the hands of minors, and the same success could be expected with cannabis.

When asked will it pass, he replied, “One step at a time, let’s get through ways and means, and we have to vote on the House. The next step we have to go to our friends in the Senate. This bill is a different presentation than what has been presented in the past. Any comments anyone has made in the past doesn’t mean they’ll change their mind, but because it’s such a different policy, I’m hoping everyone keeps an open mind. Let’s see how the hearing goes on Thursday.”